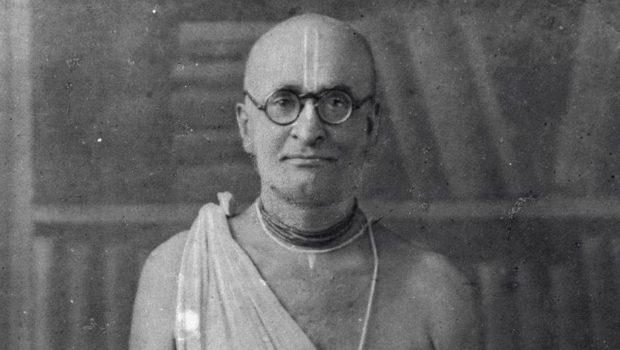 Although outwardly he was like a lion, inwardly, he was very, very sweet, yet it could be traced only in his internal sweetness. Outwardly, the way of love was worshipped by him with grandeur, and awe and reverence, but his object was the simple and beautiful, divine love of Vṛndāvan, and his temperament in establishing that in the world was just like a lion’s. After his departure, I described his life in one śloka. If he were living today, I think he would say that Śrīla Śrīdhara Mahārāja has imprisoned me in a cage of poetry.

With his first step, he vigorously cut asunder the whole plane of exploitation, and with his second, he has put a stop to all the calculation, liberated stages. With his third step, he has minimized the hardness and stiffness of the rules and regulations of calculative devotional service by a touch of divine love: crossing Vaikuṇṭha, he has given us the worship of Rādhā-Govinda.

Calculation, the rules, and regulations, awe, reverence — all these things are minimized, checked, slackened with the softness of Vṛndāvann within, and, with the hardness of a devastator without, he created havoc in the materialistic world, fighting with one and all. Singlehandedly fighting against the whole world and cutting asunder everything, that was his external attitude. And his second attitude was to put a stop to all scholarly researchers and doctorates of different departments and to stop their boasting research. And third, to minimize, to slacken, the grandeur of the worship of Nārāyaṇa. He caused the domain of love to descend into this plane with the service of Rādhā-Govinda, establishing the flow of divine love from the heart as all-in-all. With that, we come to serve our object of worship, and he represented the service of Rādhā-Govinda as the highest attainment. That was his history. The real existence of Śrīla Bhaktisiddhānta Sarasvatī Ṭhākura Prabhupāda is in bhakti-siddhānta-vāṇī, his divine teachings. May that bhakti-siddhānta-vāṇī dance eternally within the core of your heart.