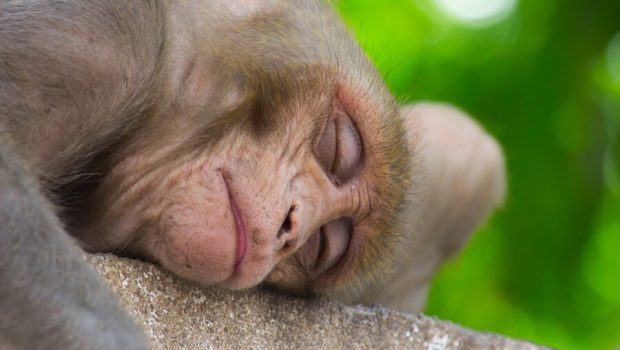 What If Animals Have Nightmares Too?

By David M. Peña-Guzman, originally published at Time.com. Peña-Guzman is an associate professor of humanities at San Francisco State University. He specializes in animal studies, theories of consciousness, the history and philosophy of science, and contemporary European philosophy. He is the cohost of Overthink, coauthor of Chimpanzee Rights: The Philosophers’ Brief, and author of When Animals Dream.

In The Fate of the Elephant, wildlife biologist Douglas H. Chadwick presents a grey portrait of the modern elephant—a creature colossal yet defenseless, imposing yet on the verge of extinction. Profoundly traumatized, too. As Chadwick explains, human activity has pushed elephant societies to their limits, leaving their members reeling in anomie, uprooted from their communities and stripped of their sense of self.

A powerful, if chilling, illustration of the psychological trauma we have unleashed upon these beings are the nightmares they experience after coming into contact with humans who covet their trunks. When young elephants witness the murder of a loved one at the hands of ivory poachers, the ghastly images of the attack are seared into their memories, leaving them so crushed that many of them start experiencing post-traumatic nightmares that disrupt their sleep patterns, dysregulate their emotions, and make them re-live what may very well be the most shattering moments of their lives.

Sadly, elephants are not alone. Many other mammals, including rats, cats, dogs, and nonhuman primates, also experience terrifying nightmares following traumatic events. In My Family Tree: A Life with Chimpanzees, conservationist Shaila Siddle recounts the story of Pal, a young male chimpanzee who entered her life after being rescued from a band of smugglers trying to sneak him into Zambia illegally in the early 1980s. At the time, Pal was barely alive. “This small chimp—a bag of bones really—had badly smashed teeth and the right side of his mouth was slit open about two inches more than it should have been,” Siddle writes. “His face and his mouth stank form the rotten flesh around the infected wounds. He was totally dehydrated and differing from terrible diarrhea, and there were flies everywhere around him.”

Although he was eventually nourished back to life, Pal was a deeply wounded individual. Whatever happened to him and his family in the days (or weeks, or months) leading to his rescue fractured him at his core. He had trouble socializing and moving through the world, and suffered from chronic nightmares for the rest of his life. He often awoke in the middle of the night “screaming in terror and screeching so hard that he began to shake uncontrollably.” Shaila wonders, “Was he remembering his capture? The death of his mother? His own injuries? I had no way of knowing, of course, but I’d hold him close and stroke his fur until he calmed down and, more often than not, he would fall back asleep in my arms.”

Like Pal, rats are also awoken by dysphoric images that taunt them and haunt them in their sleep. A 2015 report published in Nature gives reason to think that rats experience nightmares in the wake of physical and psychological abuse. When a team of scientists from Peking University gave rats painful electrical shocks to the feet, the rats remembered the place where the torture took place so vividly that mere re-exposure to the site weeks later sufficed to trigger nightmares that jolted them out of sleep. The researchers who conducted this experiment referred to this behavior as “startled awakening,” and noted that this behavior also occurs in rats who were not themselves physically abused but who instead were forced to watch other rats being tortured through a transparent barrier. Rats, it seems, dream not only of their own suffering but also of that of their friends.

What do these nightly horrors tell us about our fellow creatures?

Although philosophers have been riveted by dreams since antiquity, they have shown comparatively less interest in nightmares. Yet, nightmares add layer upon layer of complexity to our understanding of the mind—whether human or otherwise.

For instance, the nightmares of World War I veterans led Sigmund Freud to “complexify” his model of the psyche by abandoning his earlier conviction that all psychic processes are governed solely by the so-called pleasure principle. Nightmares, Freud realized, did not fit into this model since they are mental operations that bring only displeasure—indeed, profound suffering—to his patients. Why would the psychic apparatus keep on performing something that only injures it? Why wouldn’t the minds of veterans, in their preternatural search for pleasure, simply make the nightmares stop in order to make room for other, more pleasurable mental acts? It was through this line of questioning that Freud came to understand that pleasure is not the only thing that moves the psyche; that alongside, or beyond, the human drive for pleasure and joy there is a human drive for death and dissolution. Nightmares made Freud see that wherever Eros goes, there, too, Thanatos shall be. Life and death.

Even if we are not interested in Freud’s psychoanalytic interpretation of nightmares, shouldn’t the nightmares of other animals lead us to similarly “complexify” how we view their psyches?

Psychologists Ross Levin and Tore Nielsen have proposed that dreams generally serve a “fear-extinction function.” When we dream, we create virtual scenarios that help us process our deepest fears, making them more manageable. Unfortunately, the dream-formation process can glitch whenever the dreamer experiences a hyper-accumulation of negative affect such that the areas of the brain in charge of emotional equilibrium can no longer keep the currents of negative affect within bounds. In these cases of “affect load,” these currents overflow and negative affect hemorrhages all over the mind, resulting in dreams that amplify, rather than extinguish, our fears. These dreams are nightmares.

But if nightmares are born from negative affects going rogue, then the nightmares of other animals are intriguing entry-points into contemporary conversations about animal emotions since they may provide evidence of the existence of these affects in other species. In their work, Levin and Nielsen focus on fear and anxiety, arguing that when we find ourselves in a nightmare, we are fearful and anxious. Can the same be said of other animals? Do they, too, experience fear and anxiety? And what would it mean for us to attribute these emotions to a wide range of nonhumans?

Fear poses little difficulty given that we are already used to thinking of animals as motivated by an inborn fear of death. But anxiety is another story. By most philosophical accounts, especially those rooted in existentialist principles, anxiety is an intricate mood that entails not only awareness of the future but also a refined sense of self. One can fear something by pure instinct or by virtue of past experience, but one is anxious about what could happen and how this might impact who one is.

Granted, we don’t want to anthropomorphize animals by suggesting that the rats in the Peking University study experience the exact same gamut of emotions as us, or experience them in the same way we do. At the same time we should not assume, in anthropocentric fashion, that they cannot experience emotions such as anxiety simply because such emotions are complex and challenge our preconceptions about the nonhuman world. Plenty of research in comparative evolutionary cognition has demonstrated that humans are not the only animals who experience grave emotions such as disgust, grief, and maybe even guilt. Is anxiety really all that far-fetched?

Just as nightmares can be windows into the emotional lives of other animals, they can also be gauges of their cognitive capacities. Consider that, in order to experience a nightmare, an animal must possess at least four mental capacities: the capacity to store episodes from past experience in long-term memory (remembrance), the capacity to mentally break-down these episodes into their constituent elements (decomposition), the capacity to recall and recombine these elements into novel episodes at a future date (recombination), and, finally, the capacity to replay the new episodes during sleep as a way of expressing emotion (emotional expression). Since this is just what it means to have a nightmare, it follows any animal who experiences nightmares must be endowed with these capacities in one way or another.

In the end, what is a nightmare if not an unpleasant episode made up of fragments of lived experience, an episode that gives our weightiest feelings a much needed outlet? And what would a nightmare be without these fragments? Can we conceive of a nightmare with zero ties to the past, without the logic of recombination, without at least a trace of emotional significance? Put more bluntly, what are nightmares if not fictitious, but deeply emotional recreations, of a non-fictitious but equally emotional reality?

This article was originally published at Time.com and is partially reproduced here without the permission of the author, who is not affiliated with this website or its views.