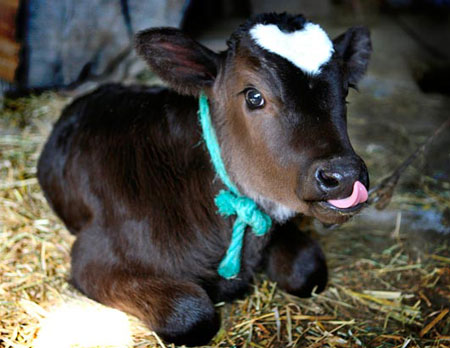 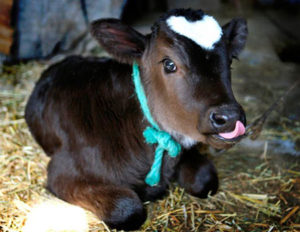 Working in an investigative journalism tradition once honed and now abandoned by U.S. television networks, Robert Kenner’s Food, Inc. is a non-sensationalist yet quietly infuriating exposé of U.S. chicken, cattle, and corn production. If the phrase “essential viewing” still has any meaning, it applies to this documentary.

Like fine-grain sandpaper applied to the polished veneer of a dining-room table, Food, Inc. diligently reveals the truth behind the cheerful advertising and rainbow-hued packaging that conspire to create the illusion of healthful, amber waves of grain. Forget about the cycles of nature and the family farm; a handful of companies control and/or dictate American meat and agricultural production. Worse, they’ve instituted a ruthless factory approach that they’ve successfully hidden from the public. 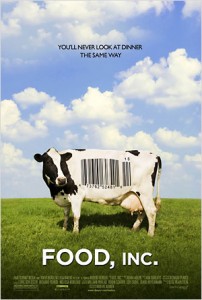 Our guides are the leading chroniclers of the domestic food industry, Eric Schlosser (Fast Food Nation) and Michael Pollan (The Omnivore’s Dilemma), whose unassailable credibility is enhanced by their low-key but impassioned demeanors. I recognize that firebrands and radicals are essential for change, but it’s also important to have the facts and strong arguments on one’s side. Or perhaps I simply appreciate the thoughtful gravitas of articulate middle-aged men (even those clad in denim work shirts) over the bouncy narcissism and gimmickry displayed by Morgan Spurlock in Super Size Me, his 2004 saga of eating nothing but fast food for a month.

It’s not the filmmaking in Food, Inc. that commands our attention, admittedly, but the content. (That’s the bottom line for most people when it comes to nonfiction, notwithstanding my quixotic insistence on calling attention to the craft and the art of documentary.) From Kentucky to Nebraska to Virginia, Kenner shows us chicken coops run by Tyson contractors and packing plants churning out beef for drive-through burgers. The footage is unpleasant but rarely harrowing or grisly; his intent isn’t to shock us or gross us out but to make us look at the real-world conditions of animals raised for meat.

The vegetarians in the crowd will watch these scenes with a measure of detachment and perhaps a little self-righteousness, but I defy anyone to keep their blood pressure level during the section on grain production. Much of the information will be familiar to moviegoers here in the slow-food capital of the U.S.: Lobbyists for Cargill and the other behemoths push farm bills that subsidize corn, which enables it to be sold on the market for less than it costs to produce. That accounts for corn’s use as cattle feed, and the ubiquity of cheap American beef. The glut of inexpensive corn also fueled the switch from sugar to high fructose corn syrup in countless products, driving up obesity and Type-2 diabetes levels.

The icing on this appetite-killing cake is Monsanto, which has employed the lethal combination of lawyers, technology, and money to steamroll Midwestern soybean farmers into buying the company’s seeds. It’s possible, I suppose, to watch Food, Inc. and remain unmoved by the treatment of animals or the waistlines of unseen Americans. But any remaining detachment disappears at the sight of weathered, lifelong farmers stomped like bugs by a heartless multinational system. If the realization hasn’t sunk in by this point that our system is broken, this episode delivers the message in spades.

Crisp and colorful, Food, Inc. is anything but dry viewing. It doesn’t qualify as medicine—i.e. you should see it because it’s good for you. But at the same time, it doesn’t sell out either its subject or its activist soul by embracing the prevailing ethos of documentary-as-entertainment. With broadcast (and cable) news divisions abdicating their basic responsibility to inform us about real issues, we are dependent on independent documentary makers to step into the breach. Food, Inc. does exactly that, powerfully and beautifully.

This review originally appeared on KQED.org.