DNA and the Protein Molecule: Chicken and the Egg 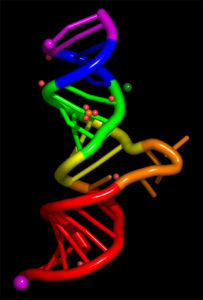 Genetic information flows from DNA, in the nucleus of each cell, to RNA, which carries the information out of the nucleus into the body of the cell and uses the instructions encoded in it to produce proteins (which act as enzymes and also provide the structural framework of cells). However, the duplication of DNA requires numerous enzymes that catalyze those reactions. And enzymes are proteins themselves – the end product of the information coded in DNA. In other words, proteins are required for DNA synthesis and DNA is required for protein synthesis.

How then could the first living cell with DNA-based molecular biology have originated by spontaneous chemical processes on the pre-biotic earth? This has been the chicken and egg problem of life’s evolution from chemicals: which came first, DNA or the protein molecule?

In the late 1960s, several biologists—including Francis Crick, Carl Woese and Leslie Orgel—suggested that the ancestor molecule was neither DNA nor protein, but RNA. RNA, they suggested, might have catalyzed reactions necessary for replication as well as provided the genetic information necessary to replicate itself. Self-replicating RNA-based systems would have arisen first, and DNA and proteins would have been added later. DNA could have evolved from RNA and, then, being more stable, taken over RNA’s role as the guardian of heredity.

This idea further got support in the early 1980s from the independent discoveries of Thomas Cech and Sidney Altman of a kind of RNA that catalyzes a reaction. These catalytic RNA molecules have subsequently been termed as “ribozymes.” In 1986, Walter Gilbert, in an article in Nature, portrayed the primordial world as “RNA World” where RNA molecules catalyze their own synthesis. Since then, the term “RNA World” has stuck to the general hypothesis: RNA first, DNA and protein later.

Researchers continue to discover new functions for existing RNA, illustrating repeatedly how versatile these molecules can be. The recent determination of the structure of the ribosome, showing that it is a ribozyme, gave further support to the belief in the RNA World. However, there are many difficulties and problems in the RNA World.

Leslie Orgel, one of the scientists who first proposed it in the 1960s, himself concedes that researchers who have attempted to illustrate the possibility of spontaneous generation of the chemical elements of RNA itself have had only modest success. Ribose, the sugar that is part of the backbone of the RNA molecule, is difficult to create from hypothetical early earth conditions, except in very small quantities. Stanley Miller and his colleagues have also recently reported “ribose and other sugars have surprisingly short half-lives for decomposition at neutral pH, making it very unlikely that sugars were available as pre-biotic reagents.”

RNA World assumes that in the primordial world, ribonucleotides spontaneously condense into polymers to form RNA molecules and RNA molecules, once formed, would have the catalytic activity to replicate itself, and a population of such self-replicating molecules would arise. However, it is objected that even if RNA could have formed spontaneously, it would have been continuously degraded by spontaneous hydrolysis and other destructive processes operating on the primitive Earth.

Joyce and Orgel point out many detailed problems with these postulates of RNA World. They finally suggest not to accept “the myth of a self-replicating RNA molecule that arose de novo from a soup of random polynucleotides. Not only is such a notion unrealistic in light of our current understanding of pre-biotic chemistry, but it should strain the credulity of even an optimist’s view of RNA’s catalytic potential.”

Similarly, Crick has expressed great doubt about the RNA World. He says, “At present, the gap from the primal ‘soup’ to the first RNA system capable of natural selection looks forbiddingly wide.”

This article is an excerpt from the late Dr. T. D. Singh’s book Life, Matter, and Their Interactions.

One Response to DNA and the Protein Molecule: Chicken and the Egg