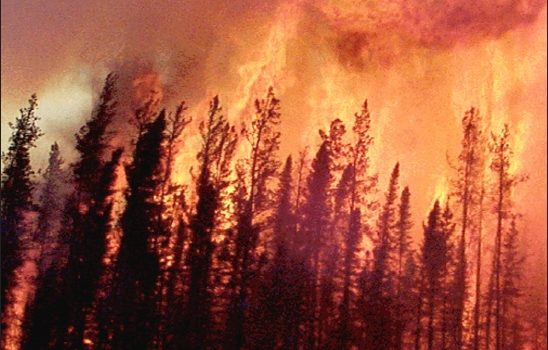 The Global Fire of Desire 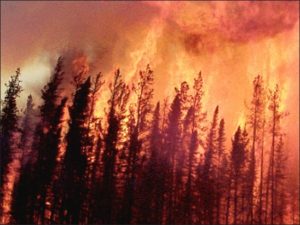 We’re a gloomy lot, with many of us insisting that there’s nothing we can do personally about global warming, or that the human race is over-running the planet like a plague.

But according to leading ecologists speaking this week in Albuquerque at the annual meeting of the Ecological Society of America, few of us realize that the main cause of the current environmental crisis is human nature.

More specifically, all we’re doing is what all other creatures have ever done to survive: expanding into whatever territory is available and using up whatever resources are available, just like a bacterial culture growing in a petri dish till all the nutrients are used up. What happens then, of course, is that the bugs then die in a sea of their own waste.

One speaker in Albuquerque, epidemiologist Warren Hern of the University of Colorado at Boulder, even likened the expansion of human cities to the growth and spread of cancer, predicting “death” of the Earth in about 2025. He points out that like the accelerated growth of a cancer, the human population has quadrupled in the past 100 years, and at this rate will reach a size in 2025 that leads to global collapse and catastrophe.

But there’s worse. Not only are we simply doing what all creatures do: we’re doing it better. In recent times we’re doing it even faster because of changes in society that encourage and celebrate conspicuous and excessive consumption.

“Biologists have shown that it’s a natural tendency of living creatures to fill up all available habitat and use up all available resources,” says William Rees of the University of British Columbia in Vancouver, Canada. “That’s what underlies Darwinian evolution, and species that do it best are the ones that survive, but we do it better than any other species,” he told me prior to the conference.

Although we like to think of ourselves as civilized thinkers, we’re subconsciously still driven by an impulse for survival, domination, and expansion. This is an impulse which now finds expression in the idea that inexorable economic growth is the answer to everything, and, given time, will redress all the world’s existing inequalities.

The problem with that, according to Rees and Hern, is that it fails to recognize that the physical resources to fuel this growth are finite. “We’re still driven by growing and expanding, so we will use up all the oil, we will use up all the coal, and we will keep going till we fill the petri dish and pollute ourselves out of existence,” he says.

But there’s another, more recent factor that’s making things even worse, and it’s an invention of human culture rather than an evolved trait. According to Rees, the change took place after the second world war in the US, when factories previously producing weapons lay idle, and soldiers were returning with no jobs to go to.

American economists and the government of the day decided to revive economic activity by creating a culture in which people were encouraged to accumulate and show off material wealth, to the point where it defined their status in society and their self-image.

Rees quotes economist Victor Lebow as saying in 1955: “Our enormously productive economy demands that we make consumption our way of life, that we convert the buying and use of goods into rituals, that we seek our spiritual satisfaction and our ego satisfaction in consumption. We need things consumed, burned up, worn out, replaced and discarded at an ever-increasing rate.”

In today’s world, such rhetoric seems beyond belief. Yet the consumer spree carries on regardless, and few of us are aware that we’re still willing slaves to a completely artificial injunction to consume, and to define ourselves by what we consume.

“Lebow and his cronies got together to ‘create’ the modern advertising industry, which plays to primitive beliefs,” says Rees. “It makes you feel insecure, because the advertising industry turned our sense of self-worth into a symbolic presentation of the possessions we have,” he told me. “We’ve turned consumption into a necessity, and how we define ourselves.”

The result is a world in which rampant consumption in rich countries is rapidly outstripping the resources in the world needed to satisfy demand.

For evidence, Rees developed in 1992 a process called ecological footprint analysis (EFA). Produced by combining national consumption statistics with calculations of the resources needed to meet reported consumption patterns, EFA generates figures that conveniently demonstrate where consumption is least sustainable, and how fast finite material resources are being used up (calculate your own here).

Rees’s latest figures, presented in Albuquerque, show that, globally, we’re already in “overshoot”, consuming 30 per cent more material than is sustainable from the world’s resources. At present, 85 countries exceed their domestic “bio-capacities”, compensating for their lack of local material by depleting stocks elsewhere, in countries that have “surpluses” because they’re not consuming as much.

Perhaps not surprisingly, given the encouragement from Lebow, North Americans are the most consumptive, eating resources equivalent to 9.2 global average hectares per capita.

The world can only supply 2.1 global average hectares per person, so already, Americans are consuming four times what the Earth can sustainably supply. “North Americans should be taking steps to lower their eco-footprints by almost 80 per cent, to free up the ‘ecological space’ for justifiable growth in the developing world,” says Rees.

The worrying thing is that if everyone on Earth adopted American lifestyles overnight, we would need four extra worlds to supply their needs, says Rees.

We haven’t yet mentioned climate change or global warming. What’s to be done? Marc Pratarelli of Colorado State University at Pueblo believes we need to snap out of our sleepwalking and begin to take real steps to cut consumption. “We have our heads in the sand, and are in a state of denial,” he says. “People think: ‘It won’t happen to me, or be in my lifetime, or be that bad, so what’s the point of change’.”

But there is hope, however slim, according to Rees, both from the top down and the bottom up. The hope from above is that governments will finally realize that never-ending economic growth is incompatible with the finite material resources Earth has to offer, and begin to manage those resources more fairly and equitably through some kind of world government.

Without global management, destruction will continue, producing food and energy “crunches” that make the credit crunch look like a tea party.

“We need to learn to live within the means of nature,” says Rees. “That means sharing and redistribution of wealth, and for that we need leadership at the highest level to understand that the competitive instinct and the drive for power and more resources is mutually destructive, so governments must act in our collective interest.”

From the bottom up, there are the glimmers of global grassroots organizations campaigning for global justice and global solutions, such as the internet-based justice organization Avaaz, which collects email votes for petitions on issues of international or personal justice.

Solving the other problem—the advertising that feeds our desire to acquire—might be more tricky. In an ideal world, it would be a counter-advertising campaign to make conspicuous consumption shameful.

“Advertising is an instrument for construction of people’s everyday reality, so we could use the same media to construct a cultural paradigm in which conspicuous consumption is despised,” he says. “We’ve got to make people ashamed to be seen as a ‘future eater’.”

Whether we’re capable of such a counter-revolution is doubtful, both because of our state of personal denial and because of the huge power of industry to continue seducing us.

“In effect, globalism and consumerism have succeeded in banishing moderation and sanctifying greed, thereby liberating Homo economicus from any moral or ethical constraints on consumption,” says Rees.

Pararelli is even more pessimistic. The only hope, he says, is a disaster of immense scale that jolts us out of our denial. “My sense is that only when the brown stuff really hits the fan will we finally start to do something.”

This article originally appeared on newscientist.com with the title, “Consumerism is ‘Eating the Future’.”

9 Responses to The Global Fire of Desire