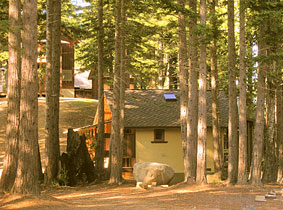 The following is an excerpt from Swami Tripurari‘s personal notes following the 9/11 terrorist attacks in New York.

We are very remote here at Audarya and other worldly at that, but the immediate impact and far reaching ramifications of the recent terrorism have not eluded us. That such acts of terror have been perpetrated in the name of God makes what is already unspeakable unimaginable.

Identification with humanity and life at large that reaches beyond immediate selfish concerns precedes self-realization and genuine understanding of the implications of karmic law. Compassion for humanity is the shadow of spiritual compassion that one must pass through to enter the heart of God conscious empathy.

After witnessing the plight of a maimed beggar in Calcutta, one of Srila Prabhupada’s disciples mentioned to His Divine Grace that sometimes he felt compassion for such people. Srila Prabhupada replied, “Why only sometimes?”

What must be the pain and personal hell of those moved to commit these acts of terrorism, and what must humanity do to deal with it appropriately? While lesser remedies involving well reasoned, qualified military action are likely in the immediate, in the long run we must rise to transcend sectarianism and the common human malady of material attachment that breeds it in order to affect a comprehensive solution.

I have been asked to write an article/chapter for a book discussing violence in the Bhagavad-gita, to be published by SUNY Press, and I have interrupted my work on a commentary for Gopala-tapani Upanishad to write it. It is a timely issue indeed.

TheGita advocates qualified violence in the realm of karma. Its firm position is that material life will never be altogether free from violence, and that qualified violence will at best affect damage control in a damage ridden domain. However, it stresses further that material life is life viewed from the wrong vantage point. Krishna implores Arjuna to change his angle of vision. To this end Krishna gives him knowledge and calls Arjuna to devote himself to God, and then charms Arjuna to love him unconditionally in his human-like appearance. Thus when we look closely we find that the Gita is ultimately about ending violence through knowledge, devotion, and unconditional love.

The ignorance of material attachment breeds bias. This bias distances us from, and often puts us at odds with, one another. It obscures the common ground on which we all stand, not only as humans, but as units of consciousness—that which animates the world. When we understand our common ground, difference arising out of this common ground becomes the ornament of variety. In this vision, all things are harmonized. The arrows Bhisma showered on Krishna during the battle of Kururksetra—the logical outcome of his discourse to Arjuna in the Gita—were perceived as flower offerings in love. Unconditional love of God has such inconceivable power.

The Gaudiya Vaishnavas consider the discussion that makes up the Gita, like the battle that followed it, to be an actual historical event. However, it is a history of Krishna lila, and Krishna lila is the influence of acintya-sakti, or inconceivable power, yogam aisvaryam. As in drama, the real life histories of Krishna lila involve no violence within an appearance of violence. This land of lila is the direction that the Gitapoints to. The land that this lila is staged on is saranagati (surrender), its dramatic acts playing over and over in eternity directed by love herself. From the Gita we learn that there is a plane of experience in which there is no violence, and this is ultimate reality. With the weapon of detachment derived from self knowledge we are advised to cut the root of material attachment and right the upside-down banyan tree of material existence; and through Purusottama-yoga know the Supreme Person, thus entering his land of no return. Where is that land? Change your angle of vision and it is here.

Here the season is changing. Autumn is beautiful and the weather is usually clement all the way through December. Those interested in visiting will find an endearing atmosphere, a different vantage point from which to view the turbulent world of the mind and senses. Here at Audarya we stress the highest vision. Sri Krishna has expressed it thus:

The yogi who measures the pain and pleasure of others as if it were his own, O Arjuna, is considered to be the best of all.

In this verse we ﬁnd the practical application of yoga in the world, what yoga practice will do to improve the world. Although this and the previous verses in this section refer to advanced yogis, it is they whom practitioners should try to emulate. Practitioners should strive to follow this golden rule of yoga. Only when practitioners do so will their practice of meditation be effective. How we deal with others and the world in everyday life will have considerable impact on our attempts at meditation. In Srimad-Bhagavatam it is mentioned that without cultivating this outlook, one’s devotional practices are performed in vain. Therein Krishna’s incarnation, Kapiladeva, instructs his mother thus:

I am present in every living entity as the Supersoul. If someone neglects or disregards that Supersoul everywhere and engages himself in the worship of the Deity in the temple, that is simply imitation. One who worships the Deity of Godhead in the temple but does not know that God, as Paramatma, is situated in every living entity’s heart, must be in ignorance and is compared to one who offers oblations unto ashes.

We are not hiding form the world here on a mountain top. We acknowledge that insensitivity to the plight of others sometimes predominates in those who have formally adopted the spiritual path. Using the logic of the scriptures and repeating the words of the sadhus can be abused to insulate oneself from one’ s own inner inadequacies in genuinely caring for others on a human level. This amounts to confusing genuine detachment with indifference to the suffering of others. Such self deception should be uprooted.

Here we are trying to affect a comprehensive solution to the suffering of the world. While the material world itself will never be free from violence and in this sense active participation in human welfare will never bring about an end to suffering, it does soften the heart. Thus, relative to one’s eligibility for spiritual culture, it should be encouraged, for as long as our heart is stonelike and we cannot shed a tear for not only the plight of humanity but all species, their is no question of developing a pure heart of spiritual compassion. Material compassion is contained within spiritual compassion. The breaking human heart is included within the deeper heart of wisdom and love of God, especially when that love of God is in relation to the human-like God—Krishna, and Sri Krishna Caitanya.

One Response to 911 Revisited