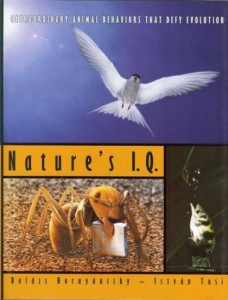 Nature’s IQ is the first book about evolution released by practitioners of Gaudiya Vaishnavism. Its publication coincided with the 200th birthday of Charles Darwin. As with many other religious approaches to the subject, the authors attempt to point out deficiencies in evolutionist explanations, specifically with regard to animal instincts. The approach is somewhat unique in that it limits the discussion to several complex mechanisms related to animal instinct, whereas many similar books in the past have tried to debunk evolution on any and all fronts—often at the price of clarity, focus, and authority. Tasi and Hornyansky do well by restricting their scope. The two hundred color photos in the book are illustrative and highlight aspects of nature that we are unable to completely understand and trace the origins of. One’s appreciation for the intricate structures in nature is enhanced by this presentation, and it can help one marvel at the beauty of nature’s creation.

Despite these positive features, there are some clear limitations in the text as well. First, the book is not clear about the audience it seeks to address: is the book meant to be a book of science or a book of philosophy, or both? Is it addressed to Gaudiyas only? Secondly, honest evolutionists admit that there are many things in nature that cannot be explained completely by basic Darwinian evolution, and they keep on adding new details into the basic structure to match the new empirical evidence. Apart from the basic evolutional mechanisms involving random mutations, genetic drift, and natural selection, new details (like epigenetic transmission of traits in species) have been introduced in recent times to account for complex behaviors. Any comprehensive address of evolution must include such additions. Even Michael Behe, one of the founders of the Intelligent Design theory, has conceded some ground to evolutionary theory in his new book, The Edge of Evolution.

The problem most scientists have with attempts to discredit evolutionary theory by books similar to Nature’s IQ is that while they do some good work in critiquing the existing explanations, they do not provide an alternative theory that can be tested according to the scientific method of empirical validation. And despite its intentions and some unique angles, Nature’s IQ’s basic premise is similar to all other attacks on evolutionary theory (i.e. complexity cannot be random) and therefore does not offer anything more for the scientific method to grab on to.

Some elements of the text just seem completely out of place. The book mentions that the jiva, or individual soul, leaves the spiritual world out of curiosity and the creation of material world follows from this reason. This theory is not accepted by most of the theistic Vedic sects and it is not clear to me how this theory can be taught as a science to the general public.

The authors argue that biblical creationism, intelligent design, and the Vedic creation theory outlined in the book should be taught to biologists and high school students as an alternative to evolution, but I am not sure these theories can be taught in a science class because they do not present a clear hypothesis that can be empirically validated. For example, verifying that Kasyapa Rishi populated the earth with various species of life under the direction of Brahma seems highly unlikely. It is very difficult to accommodate an unknown supernatural power—which is described differently by different religions—in a statistical validation test. That is why science leans towards the philosophy of naturalism, which helps them generate hypotheses that can be easily subjected to empirical tests. This does not mean that explanations given by Vedic or biblical scriptures are incorrect. They just cannot be subject to scientific testing. The scientific method in no way gives us absolute answers to origins in life; it is a particular approach to studying nature, but what nature is in itself will remain a mystery to science.

Ultimately, Nature’s IQ fails to clarify how its conclusion supports its objective: to bring out a new scientific theory that can replace evolutionary theory. While the introduction and conclusion are not tied together coherently, the middle portion of the book is the best, wherein the authors do a wonderful job of compiling captivating pictures and describing intricate and complex animal behavior prevalent in nature. If nothing else I think this middle portion makes Nature’s IQ a worthy purchase.