A New Level of Publishing 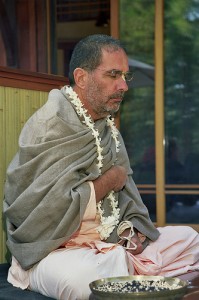 Q. I appreciated your Sanga entitled Being Chaste to Srila Prabhupada. In relation to that Sanga, I would like to ask about the International Society for Krsna Consciousness (ISKCON) policy prohibiting members from reading Vaishnava writings not published by that society. In ISKCON such literature is often referred to as unauthorized and anything published by former members of ISKCON like you seems to be particularly disparaged. What is your opinion of this policy?

A. If you are a member of a particular Gaudiya sect, it is best to follow its policies. The idea of restricting members of a sect to reading only its own published or approved material on the tradition is not altogether wrong. There may be a place for that in some instances, and if the sect’s leadership is spiritually sound its members will have faith in its leadership when the leaders determine that a particular translation, for example, is not accurate. In such instances members will save themselves time and trouble by listening to the sect’s leadership and avoiding any book not approved by it.

Then again, this principle can be abused. If you find that your sect’s policies concerning what is to be read and what is not to be read do not conform with your understanding of the tradition and its philosophy (even after discussing your doubts with senior members), you may be in the wrong sect, especially if there are other Gaudiya sects whose policies you feel more at home with. You ask specifically about Iskcon’s policy. Personally I do not know what its policy is, but I do know that some senior members not only discourage members from reading books on Gaudiya Vaishnavism published outside of the sect, books that in my opinion its members would do well to read, but moreover they also sometimes write and publish books that I consider misrepresentative of Gaudiya siddhanta.

If Iskcon does have an official policy of not allowing its members to read Gaudiya literature published outside of its corporate structure, its leaders may want to rethink such a policy. I say this because I know that my books and Sanga are read widely within Iskcon, as many of its members have written to me over the years expressing their appreciation of them. Many Iskcon leaders have also told me personally that they have read and appreciated my books. An institution’s policy that is not followed by its members, including some of its leaders, may need to be revised.

Q. What is your opinion of the way ISKCON’S publishing arm, the Bhaktivedanta Book Trust (BBT), has been managed? Would you do anything differently?

A. Srila Prabhupada wanted the publishing of Gaudiya Vaishnava literature within Iskcon to be centralized. He wanted a strict editorial policy and high quality production. In contrast, he wanted the temples and members of his society to enjoy a noncentralized form of management that fostered independently thoughtful membership and local leadership. In my opinion this policy of Srila Prabhupada seems to have been reversed, with the membership being over-managed. I say reversed because within Iskcon many devotees are publishing their own books independently of a centralized publishing arm, the BBT. To the extent that this is the case, it seems that book publishing has been decentralized and management has been centralized.

In my opinion, Iskcon’s BBT should become the premier Gaudiya Vaishnava book publisher in the world, such that other sects and all Gaudiya authors would feel they were most successful if the BBT elected to publish their manuscript. And the BBT should seek out such manuscripts. In other words, if a manuscript on Gaudiya Vaishnavism is worthy of print, the BBT should seek to acquire it and participate in its distribution. Such a policy would bring new life to a sleepy publishing organ that was intended to be the soul of Iskcon’s body. This policy would enable Iskcon to interact with other Gaudiya sects on the basis of siddhanta while maintaining its own institutional integrity and style. Rather than pretending that there is no Krishna consciousness outside of itself, Iskcon should be the over-reaching institution that points out Krishna consciousness wherever it is and celebrates and participates in it in a way that affords simultaneous integration and separation.

I am suggesting a bhedabheda unity/diversity policy, one that is both internally bhedabheda and also bhedabheda in relation to other similar institutions. The internal bhedabheda is realized in Prabhupada’s policy of decentralization of management (diversity) and centralization of publishing (unity)—one philosophy and many appropriate expressions of it. My suggestion of taking the BBT to a new level of publishing allows Iskcon to make a statement as to its oneness in philosophy with other Gaudiya sects and at the same time maintain its difference with regard to its own institutional integrity, management policies, and so on. Unfortunately, such a revolutionary bhedabheda idea may be acintya (inconceivable) to the present leadership of Iskcon. However, Iskcon’s present administration will eventually be replaced by another administration and what may be inconceivable to the present administration may not be so to a future administration.

2 Responses to A New Level of Publishing