The Full Moonrise After the Setting of the Sun 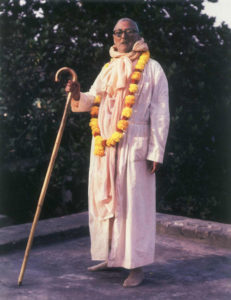 With the setting of the sun of the manifest pastimes of our beloved preceptor, Srila A. C. Bhaktivedanta Swami Prabhupada, the world became dark. He had, with the intensity of the sun’s direct rays, illuminated the entire world with the truth of the Supreme Personality of Godhead: Krishna As He Is, krsnas tu bhagavan svayam. With his disappearance, the reality of the Personality of Godhead remained, yet for a few, in the shadows of the night, the reflected light of the moon-like discourse of Srila Bhakti Raksaka Sridhara Maharaja focused on another reality—sweet Krishna, lover of the gopis, Krishna As He Feels.

Certainly Bhaktivedanta Swami Prabhupada had this sweet Krishna in mind when he named his Deities “Radha London Isvara,” “Radha Paris Isvara,” and so on. He wanted that the people of the world would know that Krishna was the adi deva, the original, all-powerful God, as well as the playful (deva) lover of Radha. As London Isvara, Krishna was to be understood first as the Lord of London (aisvarya), and eventually as the Britts own Krishna (mamata/madhurya). That our Prabhupada wanted the people of the world to think of Krishna as theirs, the ultimate reality of Vraja as seen through the eyes of Radha, was to a large extent the emphasis of Sridhara Maharaja, the moon of reflective light. Thus he taught us to reflect deeply upon the light of Srila Prabhupada’s teaching.

Hidden in the selfless garb of disinterested nature, he shared his inner passion for the highest ideal with others only with considerable coaxing. As “Sri dhara,” he bore the love of Sri (Radha) within, and as “Bhakti Raksaka,” he kept that love hidden from those who were unfamiliar with love’s ways, guhyam akhyati prcchati. Only to those whom the saints reveal their hearts to is the secret truth of paro dharma known: dharmasya tattva nihitam guhayam mahajano yena gatah sa panthah. Our beloved Sridhara Mahahaja is such a mahajana, a mahatma.

Mahatmanas. . .bhajanty ananya-manaso . . . and bhuda bhava-samanvitah. Those who are great souls worship Krishna without deviation, and moreover, with the knowledge (budha) that leads to feeling (bhava). This bhava is raga-samanvitah. Our Sridhara Maharaja served Sri Sri Radha Krishna with such feeling, the feeling that develops after knowing definitively that Krishna is the source of everything, in whom the fullest potential for loving reciprocation lies. Bhagavan svayam is akhila rasamrta murti. It is this loving Krishna, his potency, that comes to us as sri guru. There is no more dear friend than him/her, the servant-friend of Radha.

Oh, for the day when that inner wealth will be mine, to realize the import of the appearance of sri guru in my life. It is said in kavya (poetry) that if one sees a humming bird fly into the lotus, one will become wealthy. Such is our riches–yugal milan, to see to the union of the Divine Couple, as taught by sri rupanuga guru varga, and thereby reap the inner wealth of Sri Radha’s love for Krishna.

Who could speak of these things were it not for His Divine Grace. With towering stance and eyes of love, blind only to the faults of others, our Sridhara Maharaja lived in the reality of the poetry of the absolute, in the mythic reality of Vraja.

In poetry, one can do anything. Such is Vraja, where water turns to land and land into water at the sound of Krishna’s flute, tejo-vari-mrdam yatha vinimayo. This Vraja is not a fixed place, rather one that moves following the cowherd’s need for pasturing ground. And so our Sridhara Maharaja moved, never static, always dynamic, a great harmonizer of contradictions, a resident of that land of love.

In love all contradictions are resolved. In love one sees the faults of the object of one’s love as virtues. Such is the spirit of Vraja, and our Sridhara Mahahaja exemplified the implication of the appellation “Vraja,”—that land in which “all things are completely appropriate.” Sri Vraja dhama—the heart of religion—is, in the language of Saraswati Thakura, “proper adjustment,” that which Srila Sridhara Maharaja personified. May he graciously grant us residence therein, in the friendly service of the Sweet Absolute.