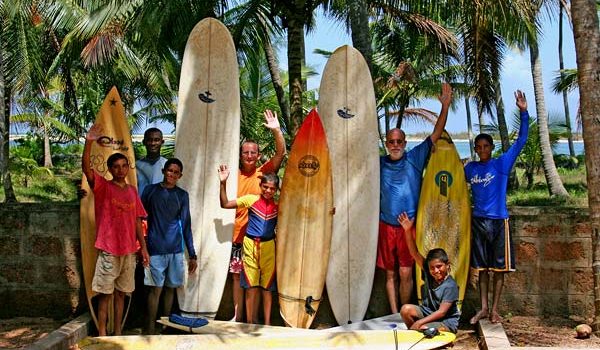 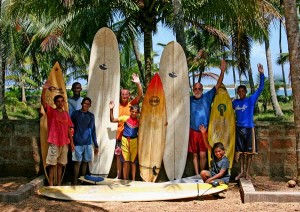 Surfing, a sport with devout followers from South Wales to New South Wales, has never caught on in India—despite the country having more than 4,500 miles of coast and giant waves during the monsoon.

That could now change as the world’s first surfing swami sets his sights on popularizing the pursuit across the subcontinent—a land that the holy man says has waves as attractive as those in the surfing mecca of Hawaii.

Swami Bhakti Gaurava Narasingha, 64, an American Hindu monk who has been living in India for four decades, has opened the country’s first surfing ashram—religious community—near Mangalore on the southwest coast.

At the Kaliya Mardana Krishna Ashram, ripping down the face of a glassy, peeling wave on a plank of polystyrene is considered a form of meditation. Set near the beach amid rice paddies and coconut groves, the commune has already attracted a handful of global surfing superstars, hundreds of Western amateurs, and scores of curious villagers.

“For some people, surfing is almost a spiritual thing,” Swami Narasingha said, explaining the link between the sport and his interpretation of Hinduism. “It’s to do with a very mellow connection to the ocean.”

Life at the ashram does not conform to the all-night party culture often associated with surfing, nor does it fit the common preconceptions of monastic life. Swami Narasingha—who also goes by his given name Jack Hebner—does not drink or smoke and is a strict vegetarian.

His followers are expected to live similarly abstemious lives. He took a vow of celibacy three decades ago and couples who stay at his ashram are requested to refrain from sex during their stay.

The monks who live at the ashram wake at four am to chant “Hare Rama, Hare Krishna”, but they do not beg for alms. Instead they earn money by doing freelance web-design work through a contractor in San Francisco and by running a local bottled-water company. Swami Narasingha also owns an art gallery in Bangalore.

The “Surfin Swamis”, as the community has become known, also rent boards and rooms to visitors. Swami Narasingha believes his is the only surfing ashram in existence—a claim that appears credible. Historically, the ocean has been looked upon with suspicion in Hinduism, the religion followed by 80 per cent of Indians.

According to some interpretations of Hindu mythology, the ocean—or “dark water”—is a resting place for the gods. Those who venture out into the sea risk disturbing them and could face the wrath of demons and monsters. In more modern times, a reluctance to enter the water may have more to do with the pollution that blights many beaches, which are often used as al fresco lavatories.

But Swami Narasingha believes that attitudes are slowly changing and that India is well on the way to becoming a global surfing hotspot for the sport’s cognoscenti. The beaches around his ashram get about 40 days “of really great surf” a year, he says. That may not sound like a great hit rate. but he adds that the real action is found at a small number of “secret offshore islands, where the waves are as good as Hawaii or anywhere in the world”.

This article originally appeared in the Times Online.

28 Responses to The Surfing Swamis