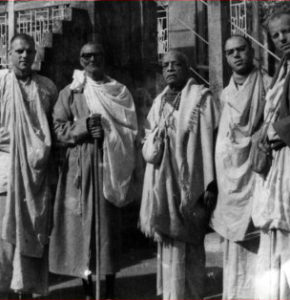 In the second portion of chapter 5, Swami B. B. Visnu continues to address to common objections, point-by-point.

Many Came to Take Initiation

Swami Maharaja had earlier approached me to train up some boys, but first he sent them to another Maharaja, disciples like Acyutananda, Ramanuja, Hrsikesa, and some others. But one of our godbrothers took one away from your Guru Maharaja and made him his own disciple, and then he wrote to me in the name of Govinda Maharaja asking me to look after the boys. That letter I still have. So Acyutananda and Ramanuja came first; he wanted me to train them up. He always had great trust in me that I would not make disciples out of his disciples. For this reason, he would come to me, and also he knew me from earlier days.

Pisima (Prabhupada’s sister, Bhavatarini) had taken hari-nama diksa from our Guru Maharaja, and she had come to me for the second initiation. At that time, I decided not to give any diksa because I thought myself unfit. But on the other side there was Prabhupada’s (Bhaktisiddhanta Saraswati’s) order to give diksa pracar. I was wavering between these two points: on one side my guru’s orders, and on the other side I thought myself unfit to give diksa. But the point that I did not want to give was more prominent. I went to Sripada Nityananda Prabhu’s birthplace, and there I felt an urge to give diksa. And then reading Srila Jiva Goswami, I came across a point where it is said that I should give what I have. If I don’t give what I have, I am a cheater. All these points, and Guru Maharaja was always in favor of kirtana and pracar.But Pisima came before this, so I had to turn her away. Many people had come, many, many nice people had come, but I had to turn them away, all of them.

They all wanted me to become acarya. Madhava Maharaja, Goswami Maharaja, and Kesava Maharaja would not have become acaryas if I had taken up this post of being acarya. They all wanted me to become the acarya, especially Madhava Maharaja and Kesava Maharaja, and many others, even Jajabar Maharaja. They started initiating because I did not want to initiate. Swami Maharaja had great faith that I would not try to lure away his disciples. I did not want to become a big person. That is not in my nature. I did not want to move around with many people. I’m just satisfied with whatever I have. I am only concerned about my high thinking. That is my life. My spiritual thinking is my life. The conclusions of the scriptures, the advice of the mahajanas, to relish them and practice them, and to discuss them in a small confidential circle, that is the main goal of my life. That’s why he trusted me.

Srila Sridhara Maharaja’s mood of disinterest in collecting disciples may be contrasted with the mood of other godbrothers of his, some of whom re-initiated or tried to capture Prabhupada’s disciples during the time of Srila Prabhupada. It would also be prudent to contrast his disinterested mood with regard to collecting disciples with the mood of those who criticized him, asserting that he was eager to collect followers and to live off Srila Prabhupada’s accomplishments.

We Will Be Responsible to Mahaprabhu

Srila Sridhara Maharaja related that he felt it his duty to give proper advice when requested by devotees—that it was an offense to not help. Although asked by the GBC to not advise members of Iskcon, it soon became apparent to Srila Sridhara Maharaja that it was the GBC’s activities that were the very cause of the majority of these devotees’ problems. The GBC wished to maintain the status quo without any suggestion of reform. By providing counsel to disturbed Iskcon devotees, Srila Sridhara Maharaja provided a forum for the many problems within Iskcon to be voiced and proper solutions suggested. However, any such suggestion of impropriety on the part of the GBC, or reform of such, was strongly opposed.

On August 25, 1981, Srila Sridhara Maharaja addressed accusations that his preaching to disenheartened devotees was inappropriate:

Your vision is different than mine. My vision is that a jiva is in the ocean and is going up and down with the weeds. Going down gradually. And anyhow he has come to the shore. And again I shall push him into the ocean? Consider his eternal life. This time he has come to you in his eternal chain of life, birth, and death and he can be saved. Back to God, back to home. He is coming home and I shall push him back into the ocean of this death and birth? I can’t be so cruel.

So many good souls came under the flag of Mahaprabhu through Swami Maharaja—will they fast and die? So, some relief work should be done, that was my intention, avoiding all possible clashes with the main distribution [preaching of Iskcon]. No clash with the main distribution, but only relief work, that is my only concern—the big souls, the great souls, they are being aloof, and going away and becoming indifferent to Swami Maharaja and Mahaprabhu and our Guru Maharaja, Srimad-Bhagavatam, and Krishna. And I shall stand and tolerate all these things-seeing that, I shall feel that I am not seeing the real thing. [It cannot be true.] That is difficult for me. So, I ask my friends, “Start some relief work, to save your own friends, those who are not encouraged by the present organizers.” It is obvious that they [gurus] will rely more on the sons [disciples] than on the [god] brothers. It is a general thing, and we have the sad experience in our own distribution like that [in the Gaudiya Matha]. So, I could conjecture that such things should occur, and we shall try to help them somewhat; otherwise, we will be responsible to Mahaprabhu, although personally I am not fit to carry on with the responsibility of many devotees, especially in this old age. Jiva Goswami says jnana sathya vittha sathya, that if I have some money and another person is suffering and I can’t pay—if I keep tight that money, and he lies fasting without food, then I’ll be responsible for that. Vittha sathya. So, jnana sathya is there, I have got some knowledge, I can help my neighbor, but if I don’t do that, then I am responsible. I shall commit an offense against the society and against the cause.

A more pertinent question to ask is whether the GBC’s mood is different from Srila Prabhupada’s. Srila Prabhupada was always ready to show with reason, logic, and scriptural references how all his plans and decisions were solidly Krishna conscious. The GBC, on the other hand, has shown a different mood over the years.

The GBC, in their 1995 Mayapur resolutions stated:

In the spirit of the Srila Prabhupada Centennial, the GBC formally extends apologies to any devotees who have been hurt by poor treatment or mistakes made by Iskcon leaders.

Somaka Maharaja, a respected sannyasi preacher in Iskcon, in his paper entitled In Search of Harmony, asks relevant questions in light of this GBC statement:

What is the plan to approach the devotees and actually beg pardon from them, admit our mistakes, give them a strong embrace and try to solve the differences? Is the GBC body going to approach Pradyumna Prabhu and apologize to him and give him back his service as translator as given to him specifically by Srila Prabhupada? Is the GBC going to recognize that in the letter that Pradyumna Prabhu wrote to Satsvarupa Maharaja in 1978 he pointed out all the defects that in 1987 [sic 1985?] due to so many falldowns they had to admit? Are the GBC men going to approach Paramadvaiti Maharaja to recognize that all the defects that he was presenting in his letter of 1984 were forcibly accepted in 1987? Vaisnavas do not get stature by bureaucracy and diplomacy; they get stature based on humility, simplicity, meekness, detachment, and so many other godly qualities. The rectification of our movement isn’t finished yet. There are still so many becoming dissatisfied and going away. Let us be more careful and kind to everyone. This is the first quality of a Vaishnava.

In the Prabhupadanuga newsletter (Vol. 1, No. 1), Sivarama Swami suggests that the GBC members should be more in touch with the rest of Iskcon:

The GBC could actually be leaders or sources of inspiration. Instead, they get there once a year [to the Mayapur GBC meeting] and try to be just simply administrators, and try to solve problems through administration.

Not just a formal meeting for two days, three days. But it must be a meeting to satisfy the real necessity of the day. That is a living committee that we want. Not a formal meeting. After one year, a formal meeting and some resolutions passed and everyone has gone to his own field and is doing as he likes. (Navadvipa conversation, 1980)

Srila Prabhupada himself personally fired the entire GBC on at least two occasions and always reviewed their resolutions and rejected inappropriate ones. For example, a memo was sent to all Iskcon temples on April 8, 1972:

I also understand that immediate actions are going to take place even prior to my permission, and that also, “without divulging to the devotees!” Under these circumstances, I authorize you to disregard for the time being any decision from the GBC men until my further instruction. Finally, I beg to repeat that all GBC orders are suspended herewith by me until further notice. Your ever well-wisher, A. C. Bhaktivedanta Swami.

There was to be immediate action without divulging the matter to the devotees. And I am surprised that none of the GBC members detected the defects in the procedure. It was detected only when it came to me.

What will happen when I am not here? Shall everything be spoiled by GBC? So for the time being, let the GBC activities be suspended until I thoroughly revise the whole procedure. So our view is that we shall be strictly following the rules and regulations. Monetary matters are secondary.

It is ironic that the far from perfect activities of the GBC differed from the standard of Srila Prabhupada greatly, while the apparent discrepancies between the teachings of Srila Prabhupada and those of Srila Sridhara Maharaja were misperceptions on the part of those who differed considerably from Srila Prabhupada in their administrative policy as well as their understanding of Gaudiya siddhanta.