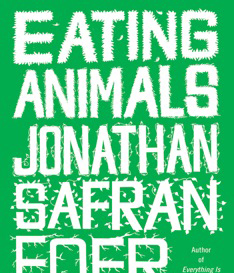 A friend of mine lamented that she knows several vegetarians who have recently abandoned their plant-based diets. She cited the influence of Michael Pollan (The Omnivore’s Dilemma) and his acolytes who have done much to popularize notions of “humane meat” and the “compassionate carnivore.” In particular, Pollan has portrayed strict vegetarians as the most anti-social and unrealistic variety of food activist.

I share my friend’s sense that Pollan’s books and articles on agribusiness and small farm alternatives have actually emboldened omnivores and prompted some vegetarians to rethink an important commitment. In this respect, a new non-fiction work called Eating Animals by best-selling novelist Jonathan Safran Foer (Everything is Illuminated) may contribute something valuable to the popular food and green living discourse.

Eating Animals is not a philosophy book. In fact, so much does Foer avoid highly intellectual perspectives on what to eat (and what not to eat) that the work of Peter Singer and similar thinkers is never once mentioned.  Instead, Foer primarily traces out the material consequences of humanity’s appetite for land and sea animals, withholding no graphic details in his descriptions of turkey farm conditions, slaughterhouses, and brimming manure pits. Foer’s literary ability is in evidence in these uniformly gruesome accounts, but the subject matter requires no embellishment in order to appall the reader.

Foer also includes language and data from industry publications, animal husbandry experts, and confessional statements from farmers themselves. It is unlikely that readers whose hearts are not softened by the brutality laid bare in Eating Animals would be swayed by philosophy, or more sentimental arguments for vegetarianism. As a result, Foer’s work does not seem deficient. For the non-vegetarian, I suspect that reading Eating Animals is an exercise in remembering what he or she has elected to forget: chicken is a chicken. The book is a call to basic reasoning, a faculty that Foer notes is conspicuously absent from most decision-making about what to eat. Set against the backdrop of obvious suffering and cruelty, Foer makes postmodern ambivalence about the lives’ of others appear unbecoming in the extreme.

Foer may be at his best when he addresses Pollan’s flimsy critique of vegetarianism and naïve notion that domesticated animal species entered a pact with humans, involving the exchange of protection and care in return for their flesh. Given the realities of modern farming, Foer deems this type of agricultural myth-making to be ludicrous.

Those already adhering to a vegetarian diet may take away from Eating Animals little more than updated facts and figures about pig farming, slaughterhouse techniques, and food-borne illness. Even so, it is noteworthy that someone of such literary prominence has devoted energy to exposing his (hopefully vast) fan base to a subject of such importance. Anecdotally, Foer’s recent publicity appearances have drawn enormous crowds in US cities.

At first glance, Gaudiya Vaishnavas—whose diet is predicated on a conceptual orientation that is not explored here—may find little to sink their teeth into within Foer’s work. An area of possible interest, however, is Foer’s exploration of the connections between food, memory, and what it means to be human. Like Pollan (and the Vedic view), Foer contends that sharing of food is an act of fellowship that establishes or fortifies social bonds. Moreover, humans have strong memories of (and attachments to) food that is served on holidays, doled out to us by loved ones, and put before us in our youth. The literature of Vaishnavism is peppered with examples of this sort.

Like Pollan, whom is alternately praised and critiqued throughout the book, Foer uses the expression “table fellowship” to express the kinship fostered by sharing food. Although every social-religious culture has elaborate rituals and rules pertaining to food, Gaudiya Vaishnavism is unique in its exploration and articulation of the farthest reaching possibilities of such a principle. Indeed, in the context of bhakti, “sitting down to lunch” can imply something incredibly extraordinary, such as described in Bhoga-arati-kirtana by Thakura Bhaktivinoda. Interestingly, the highest expressions of Vaishnava “table fellowship” remain very human in appearance, and not entirely unlike the vegetarian Thanksgiving feast Foer plans for his family.

On balance, I am optimistic that Eating Animals will help many readers face up to facts that the entire modern farming system is designed to help them ignore. Foer’s work adds a critical perspective to popular dialogue about food and agriculture, falling squarely (and thoughtfully) in the corner of vegetarianism. Given Foer’s reputation as one of the greatest novelists of his generation, it is conceivable that his widely-available work will draw new voices into that dialogue, and add more than footnote to current debate about what (and whom) many humans eat.