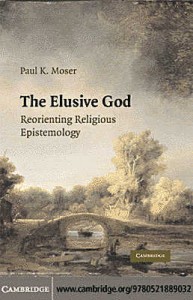 …Paul Moser thinks that certain sorts of experience provide conclusive evidence for the existence of God, but they are not “the mystical, spectacular, or fantastic religious experiences reported by many proponents of religious belief.”1 And he places little stock in the arguments from natural theology, describing them as “at best incidental, even a dispensable sideshow.”2 Moser thinks that experiential evidence of God’s existence comes through personal interaction with God’s Spirit and is available to everyone who is willing to receive it. It constitutes conclusive evidence for belief in God, that is, it not only justifies the belief that God exists but also warrants trust in God. By “conclusive evidence” he means “well-founded undefeated support suitable for (fulfilling the justification condition for) knowledge: it may or may not be logically, or deductively, demonstrative” (p. 2). By “God” Moser means “a being inherently worthy of worship who is morally perfect, morally authoritative, and perfectly loving to all persons, including enemies.”3

For Moser, the evidence that supports belief in God is non-propositional and comes through Spirit revealing itself in human conscience (p. 193). Again and again, he refers to such evidence as “purposively available authoritative evidence” of God’s existence and His willingness to help people become unselfishly loving (see all the entries in the Index on “purposively available evidence”). According to Moser, the experience of Spirit in conscience provides the “needed epistemological foundation” for experiential knowledge of God similar to the way that non-propositional olfactory, auditory, tactile, visual, and taste sensations provide the epistemological foundations for knowledge of things and events in the world. (Moser uses the example of someone whose red sensations provide evidence for her belief that there is a red patch in her visual field, p. 63). He writes,

He goes on to compare the available evidence of God in conscience to the evidence from conscience that supports our beliefs about what we have a duty to do, or refrain from doing (p. 62). Conscience convicts us of being too selfish, of failing to be unselfishly loving, and if we do not suppress the voice of conscience, “we then experience guilt, shame, and judgment” (p. 43). Moser does not think that the first-hand, foundational experiences of God in conscience are self-authenticating (p. 27). As such, they are not like our experiences of pain or, if Sartre is right, the awareness of another consciousness that results from realizing one is being looked at, perhaps in a compromising position. But Moser thinks that the reason we should believe that the experiences of Spirit in conscience are genuine experiences of God is that the assumption that they are is the best undefeated available explanation of those experiences and other evidence we possess.4

Part of this other evidence is to be found in the volitional transformation, the change in our wills and attitudes, that follows upon the apparent experience of Spirit in conscience (see p. 150 and the end of Chapter 2). Moser writes, “As human history and our own lives show, if they show anything, we lack the power on our own to love unselfishly as God loves.”5 However, people find that after their experience of Spirit in conscience they are empowered to love more unselfishly. Moser thinks that the best explanation of the change is that God, through his grace, has helped transform these people (p. 156; on p. 22 he writes of “a change in life-direction” as being “salient evidence of divine intervention” and on pp. 155-57 he argues that beneficial changes in a person’s life that follow the relevant experiences in conscience are best explained by God’s empowering the person to make those changes, that the changes for the better are “salient evidence” of God’s intervening).