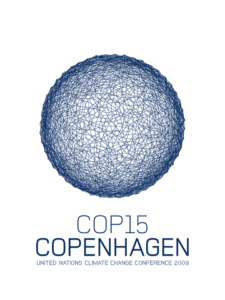 The vast majority of the world’s nations and about 100 heads of state are migrating to Copenhagen for a two week meeting to hammer out a plan to protect the Earth’s climate from human use of the atmosphere as a free sewer to dump our tailpipe and smokestack wastes, and some of the products of deforestation and land degradation.

“Hammer” may indeed be the right metaphor for the verbal head banging going on among those who are demanding major cuts in greenhouse gas emissions from the wealthy countries who produced most of the historic accumulated pollution. The ones pushing dramatic cuts by 2020 include small island states getting flooded out of house and home by sea level rise, or most western European states, on one side, and fossil fuel producing states and developing countries on the other side, the latter claiming they haven’t yet had their fair share of the atmosphere to dump their wastes in, refusing to take on much reductions for themselves.

The US, after two terms of Bush Administration climate change denial that virtually tied up progress in the negotiation progress, is strongly endorsing strict very long term targets—like an 80 percent cut in carbon dioxide emissions by 2050, but is proposing only minor cuts by 2020. The weak short term target from the US is angering those who are claiming that this will not help alleviate the planetary “climate emergency” we face. Compromise is predicted by some optimists and rejected by many pessimists. But it is still early in the game and national posturing always dominates early phases of negotiations like this. What is mostly lost in the middle of the posturing are our children and grandchildren’s interests in a sustainable world and the viability of the plant and animal kingdoms, that had no role in creating the problem and have the least adaptive capacity.

The past 40 years, when attached at the end of a reconstruction of the temperatures of the past 1000 years, look like a bit like a “hockey stick” with a wavy handle but a “blade” that rises above the climatic history of the millennium and exhibits the warmest decades in the record in the past 30 or so years. This reconstruction has been the object of intense arguments between the climatologists who constructed the hockey stick and some skeptical attackers who claimed it was erroneous. The US National Academy of Sciences conducted an extensive study on this and agreed that individual scientist’s assumption were occasionally questionable—the normal process of scientific progress—but that a dozen replicate studies added more waviness to the handle but the blade still stood out. Hockey stick denial was a favorite item of the climate skeptics, despite the NAS study.

Debate lines at Copenhagen over short term targets versus long term technology development plans and funds for adaptation and technology transfer to the lesser developed nations remain sticky—they are yet the latest re-rehearsal of a rich country-poor country divide that has been going on at these UN sponsored Conference of the Parties (COP) meetings since the Rio Earth Summit in 1992—where a protocol was signed by President Bush I and ratified by the US Senate. It declared that all signatories—about 190 countries—agreed to reduce greenhouse gas emission to a level that would prevent “dangerous anthropogenic interference with the climate system.” Unhappily, precious few countries have met that agreed to criterion. In the US it seems not to have been an impeachable high crime or misdemeanor to violate this law of the land contained in this treaty.

Now, however, after record melting of high mountain and polar ice, killer heat waves, intensifying wildfires and some stronger hurricanes, the Intergovernmental Panel on Climate Change (IPCC) declared anthropogenic global warming (AGW) as “very likely” over the past 40 or so years. “Very likely” in IPCC parlance means more than a 90 percent chance human activities were a prime cause of the record warming since the 1970s. In essence, what is different from when some of us warned about this problem to presidents, legislators and ministers in the late 1970s—when global warming was still largely theory—is that in the subsequent 35 years “Nature has been largely cooperating with theory”, as I phrased it in my new book Science as a Contact Sport: Inside the Battle to Save Earth’s Climate, which details the 40 year history of our failure to achieve meaningful emissions cuts at either a national or global level. Despite all this, concerning history, there is legitimate optimism as momentum is building for a global deal. Over the next two weeks the world will watch the Copenhagen delegates and tens of thousands of non-governmental “observers”—including yours truly—try to put our planetary future ahead of short-term national interests. The stability of the climate hangs in the balance, and history is not a promising model for success.

For Schneider’s take on “Climategate” read the full article from Huffingtonpost.com.

31 Responses to Update from Climate Conference 2009