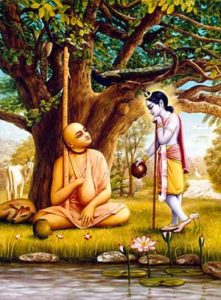 Faith is almost nonexistent to us in our present condition, but faith is the most substantial thing and it has got superior existence. Other things may vanish, but faith will stand forever. Faith is the particular potency of Srimati Radharani. Krishna is ecstasy himself and he feels himself, he tastes himself, he enjoys himself. The distribution of that sort of ecstatic joy to others, however, is only possible through faith, through sraddha. It is the very nature of the hladini-sakti, which is represented in full by Radharani.

Faith can transmit Krishna Consciousness to the outside world. Faith is the halo of Radharani, the light of which allows others to understand Krishna. Sraddha means faith and that peculiar sort of substance is to be understood by us. What is that? It is not a mere abstraction. We are wakeful in this material world, but there are others that are completely awake in that plane of faith. This world of matter is underground; it is far away from their conception.

This tangible world of exploitation and enjoyment is far, far away from those who are deeply engaged in the world of service through faith, sraddha. They believe that even to feel the need to see Krishna is a kind of enjoyment. They say,” No, we won’t disturb his sweet will. Whenever he likes he may come before us and then we will get the chance to see him; otherwise, not.” It is a kind of imposition of our exploiting nature that we should, for our satisfaction, want Krishna to stand before us. The devotees do not want that.

Madhavendra Puri was fasting so much so that he did not beg for food or his livelihood from others. If things came automatically, he would take them, otherwise, he would fast. Krishna came and supplied some food to him and said,” Why, Puri, do you not beg for your food?” We think that Madhavendra Puri was very fortunate that he was supplied food by Krishna, but we find higher devotion in Sanatana Goswami.

When Radharani came and supplied foodstuffs to Rupa Goswami for cooking rice, Sanatana Goswami became very disturbed at heart. “What is this Rupa? Did you aspire after something for me?” Rupa Goswami replied, ” Yes I did Gurudeva; I thought that if I got some milk and rice, I can prepare some sweet rice which is your favorite and so I then could invite you to take that prasada.” Sanatana replied,” You have done wrong. It is so tasteful that I have never had such tasteful prasada ordinarily prepared here. It must have some peculiar origin. Who gave you this material? You wanted it, so who gave it you?” Rupa replied,” A girl came from her family and presented it to me.” Sanatana inquired, “Who is that girl?” That girl was never found in that nearby village. Then Sanatana Goswami could understand that Radharani had come and supplied the ingredients. “We are hunting after her to serve her and she came to serve us! What is this? Just the opposite. What have you done, my brother? You wanted something for me and that was supplied by her. This is a great misfortune.”

Sanatana Goswami was very disappointed and he went away with that sort of mind. Rupa Goswami could not take that prasadam. Krishna had supplied food to Madhavendra Puri, and in some consideration that could be seen as a great fortune, but with this incident concerning Sanatana Goswami, we can see that the higher kind of devotion never requires that Krishna comes and supplies us with anything. To impose our will on him is not service proper. Whatever he likes he will do and whatever he requires from us, we should consider ourselves fortunate if we are able to supply it. All our desires should be exhausted and eliminated fully and we should place ourselves at the disposal of the Supreme.

It is Krishna’s nature to supply anything to his devotees, but the devotees do not want that the he will carry out fulfilling their necessities himself. Pure devotion is like that. Through faith, the devotees think, “he is my Lord and I don’t want to have darsana to satisfy my lower faculties.” It is a lower class of faith that demands that if I can see him then I’m satisfied that he exists. We have no capacity to see him. To be the subject and to see him as an object is a lower kind of faith. The higher kind of faith dictates that he does exist and that he is the cause of everything, wherefrom everything is coming, everything is being maintained and everything is, at last, entering into.

We should not think that the effect is everything. The cause is there as well. What is the nature of that cause? Some say Brahma is the cause, some say Paramatma, and some say Bhagavan is the cause of everything, the destiner and designer of everything. So try to keep the faith. It is meanness to search after proof whether or not he exists, for deep faith says he does.

One Response to Faith and the Darsana of Krishna