Review: The One Straw Revolution 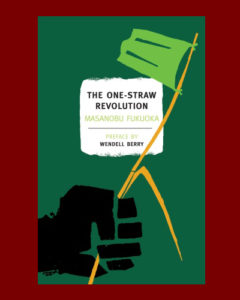 Prescriptive books about agriculture, how to eat and how to think about food seem more and more popular these days. (At least those written by Michael Pollan.) And with the resurrection of an old French-cooking warhorse to the best-seller list, I’m hoping we’re entering an age of rediscovery, where long-neglected books—books that have been more “influential” than, you know, actually read—will begin reappearing in bookstores and on nightstands.

One of those lost books was reissued this summer by the New York Review of Books Classics imprint, a handsome little tome called The One-Straw Revolution by a Japanese rice farmer named Masanobu Fukuoka. I had never heard of it before I saw an ad for the reprint in The New York Review of Books, though a blurb on the book’s back cover by Pollan, an introduction by Frances Moore Lappé and a preface by Wendell Berry (the three make up a formidable trident of Food Righteousness) all assert the influence the book had when it was first published in the late 1970s. The prices that used copies fetch on the Internet also seem to mark it as something widely sought after.

In the book, Fukuoka tells the story of his life after he had a revelation in his 20s that human knowledge is worthless and, specifically, that the agricultural application of that “knowledge” is destructive. He hung up his lab coat (he had been an agricultural inspector for the Japanese government) and left his cosmopolitan life behind. He returned to the plot of farmland he was raised on in the mountains of Shikoku, in southern Japan, and set out to do nothing. Literally.

Fukuoka espouses a philosophy of what he calls “do-nothing” farming, arguing against weeding, fertilization, pesticides, composting and cultivation, and arguing for humans to watch nature, learn her rhythm and then synchronize their farming with it. After a few disasters, he restores a natural balance to his fields. His rice yields skyrocket and his Mandarin oranges, grown without intervention, fetch the highest prices at market. Almost as important, he restores a lost balance to his life as a farmer: he has months of free time away from the fields, during which he can compose poetry and be in nature, rather than tied to trying to master it.

The One-Straw Revolution shifts in tone and scope during its brisk 185 pages. Fukuoka starts with his life and the discovery and development of his method of “do-nothing” farming and expands outward, holding forth on the right way to eat, when to eat what foods, the difficulty of using terms like “natural” and “right” when they’re applied to foods and farming, and eventually into a full-out denial of relativity.

Fukuoka’s tone is Zen didactic; at turns he employs ruefulness, scorn, enthusiasm, even simple facts (say, of the amount of rice a certain parcel of land can yield) in service of his arguments. In some ways it reminded me of Jun’ichiro Tanizaki’s “In Praise of Shadows,” a short essay on the erosion of the traditional Japanese design aesthetic in the 20th century that turns out to be a much broader address.

And while there might be a practical aspect to chapters like “Growing Backyard Vegetables Like Wild Plants,” I think that for most of us non-rice-growing city folk, the book’s appeal is more elemental: the accumulated life lessons of an old mountain man who turned his back on the way everybody else did things and struck out on his own. And how many food books have chapters that kick off like this?

A snake seizes a frog in its mouth and slips away into the grass. A girl screams. A brave lad bares his feelings of loathing and flings a rock at the snake. The others laugh. I turn to the boy who threw the stone: ‘What do you think that’s going to accomplish?’

This article originally appeared in tmagazine.