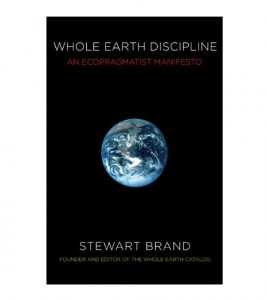 If we are serious about curbing climate change, what would actually help? More people in cities, lots of nuclear power stations and lashings of GM crops, urges Stewart Brand. Unless green activists embrace the benefits of all three, they are not part of the solution, but part of the problem.

This prescription, from the founder of that quintessential 1960s publication the Whole Earth Catalog, comes as a surprise. And his eclectically informative new book makes the most of it. I care about the Earth, and especially about the fate of humanity, says Brand. I have changed my mind about how to exercise that care, and so should you.

He builds his case skilfully, weaving together a wealth of sources. The most novel material concerns cities, now home to more than half of humanity, and set to attract many millions more. Most will begin their new urban lives in the shanty towns and slums of the southern hemisphere. Viewed from the comfort of the developed world, they are pretty terrible places. They are also, Brand insists, full of people working their way out of poverty as fast as they can. They offer freedoms denied to villagers, especially women villagers, and foster a zillion micro-enterprises. And cities new and old cram many people into small spaces, exacting a lower environmental cost than if they stayed in the countryside.

On nuclear power, he finds that those who know the most see the least to fear. The opposite is true of coal plants, and their vast outpouring of carbon dioxide. Monuments to nuclear fear, such as the $10bn Yucca Mountain waste depository in Nevada, are, he concludes after a visit, “nutty”. Why commit to entombing radioactive waste for thousands of years with existing technology? The question has additional force when posed by the co-founder of the Long Now Foundation – another of Brand’s many ventures – which is dedicated to long-term thinking. The way to deal with the long term is to allow for adaptation and keep options open, not lock into a single strategy. In a couple of hundred years, never mind a thousand, there is a good chance we will have far better ways of dealing with nuclear waste. On the other hand, if we are back in the stone age by then, decaying nuclear waste dumps will be the least of our worries.

On genetic manipulation, he relates no Yucca-style epiphany. Brand felt that swapping genes around was no big deal back in the 70s, when scientists first worked out how to do it. The profoundly unnatural human activity, for him, is agriculture. But it has become clearer that GM crops can make it better: more productive, more sustainable, and more adaptable to climate change. Opposing such use of helpful technology, in his view, is the biggest mistake the environmental movement has ever made.

Brand’s arguments are good, and his mind-changing, let’s-all-learn-from-my-mistakes rhetoric is pretty persuasive. How effective will it be? I am uncertain, because unsure how far environmentalists will accept his claim to be one of their own. Sure, he studied ecology with Paul Ehrlich, dropped acid with Ken Kesey and lives on a tugboat in San Francisco, so his 60s credentials are second to none. But he has always had an unusual appetite for ideas, and is as likely to be found talking to tech entrepreneurs as tree-huggers. Climate change really grabbed his attention when the Global Business Network – yet another venture he co-founded – did a famous study for the Pentagon on the dangers of rapid climate shifts.

His own big idea is that the best approach to the issues he discusses is pragmatism. He fleshes it out by example, rather than by discussing its philosophical defence by John Dewey or William James. He reckons it is an engineer’s approach, accepting whatever gets results. For environmentalists, he suggests, it means not a shift in ideology, but discarding ideology completely.

Maybe so, but there are deeper matters of world view at stake here than that simple suggestion recognises. Some of them are taken up in the latter part of the book, where Brand offers his own vision of caring for ecosystems even as we transform them – adopting lessons from everyone from Native Americans to modern, scientifically informed restoration projects. There is a long tradition of managing, maintaining and repairing ecosystems which we have to learn from, he argues. It begins with gardening, but can be scaled up to take in a whole planet.

In fact, we must use that tradition to expand our future repertoire to include geoengineering as well as the trio of cities, nukes and gene-tweaking he has already dealt with. This will be an even bigger stretch for old-school environmentalists. Discussion of serious options for geoengineering, such as pumping sulphur dioxide aerosols into the atmosphere or manufacturing artificial “trees” to remove carbon dioxide, is just beginning. But it can easily sound like a collection of hubristic schemes dreamed up by mad scientists.

Again, Brand is pragmatic and cautious. We will soon be considering geoengineering, he argues, because mitigation is not going to work. We do not yet know which geoengineering schemes will work, either, but we must do the research to find out, especially through investment in sensors and monitoring to improve understanding of earth systems. He foresees that old-school greens will go on clinging to their opposition to the technologies they love to hate. But if that happens, they will be marginalised by a new generation of science-led, environmentally aware ecoengineers who recognise that the state of the Earth is now in our hands. Contemplating the outcome of the Copenhagen climate conference, I can only hope he is right. There will be long, impassioned arguments along the way, but this wise book is a great start.
_________________

This review originally appeared in the Guardian.