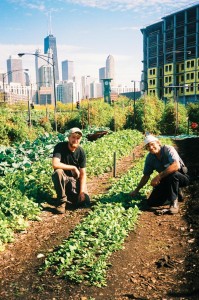 Detroit, Michigan is one of those places even hard luck has chosen to pass by. The city, long tied to the auto industry, has lost most of its manufacturing base, and close to a third of the 139-square mile cityscape is abandoned land and buildings.

What to do with all that abandoned space?  Let the city take it over and convert it to parks and recreation areas? Not plausible for a cash-strapped municipal government stretched far beyond its means just providing basic services.

John Hantz, founder and owner of Hantz Financial Services — and still a city resident — has another idea, based on some projects he’s seen in some other areas. Turn a huge swath of the city back into farmland.

Hantz was recently interviewed by Fortune’s David Whitford on the proposal. Hantz is also willing to commit $30 million of his own money, and sees a lot of upside potential to the idea:

“Farming could do his city a lot of good: restore big chunks of tax-delinquent, resource-draining urban blight to pastoral productivity; provide decent jobs with benefits; supply local markets and restaurants with fresh produce; attract tourists from all over the world; and — most important of all — stimulate development around the edges as the local land market tilts from stultifying abundance to something more like scarcity and investors move in.”

Hantz believes by consuming large pieces of available land across the city for farms, the result, in economic terms, will be a ’scarcity’ of available property — which would help increase the value of surrounding properties.

The Detroit farms won’t resemble the quaint spreads with barns and silos you see across rural North America, however. Rather, they will be multi-level state-of-the-art complexes employing the latest in farm technology, “from compost-heated greenhouses to hydroponic (water only, no soil) and aeroponic (air only) growing systems designed to maximize productivity in cramped settings.”

Hantz also has some powerful supporters for the proposal. Former HUD secretary Henry Cisneros, now chairman of CityView, a private equity firm that invests in urban development, is a booster for urban agriculture. The American Institute of Architects also agrees that “Detroit is particularly well suited to become a pioneer in urban agriculture at a commercial scale.”

Fortune’s Whitford also quotes Alex Krieger, chairman of the department of urban planning and design at Harvard, who says cities of the future may resemble “a checkerboard pattern” with “more densely urbanized areas, and areas preserved for various purposes such as farming.”

It’s an irony, since a century ago cities grew to huge proportions as people fled agrarian lifestyles to pursue better opportunities. Now, agriculture may pave the way to a new urban renaissance.

One Response to Urban Renewal: Turn Cities into Farms