Evidence of the Afterlife? 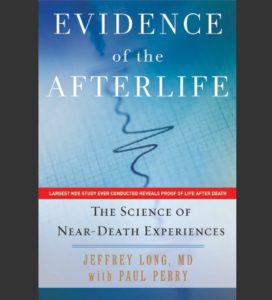 Laura Fitzpatrick of Time Magazine interviews Dr. Jeffrey Long, author of Evidence of the Afterlife: The Science of Near-Death Experiences.

Is there life after death? Theologians can debate all they want, but radiation oncologist Dr. Jeffrey Long says if you look at the scientific evidence, the answer is unequivocally yes. Drawing on a decade’s worth of research on near-death experiences — work that includes cataloguing the stories of some 1,600 people who have gone through them — he makes the case for that controversial conclusion in a new book, Evidence of the Afterlife. Medicine, Long says, cannot account for the consistencies in the accounts reported by people all over the world. He talked to TIME about the nature of near-death experience, the intersection between religion and science and the Oprah effect.

Medically speaking, what is a near-death experience?
A near-death experience has two components. The person has to be near death, which means physically compromised so severely that permanent death would occur if they did not improve: they’re unconscious, or often clinically dead, with an absence of heartbeat and breathing. The second component [is that] at the time they’re having a close brush with death, they have an experience. [It is] generally lucid [and] highly organized.

How do you respond to skeptics who say there must be some biological or physiological basis for that kind of experience, which you say in the book is medically inexplicable?
There have been over 20 alternative, skeptical “explanations” for near-death experience. The reason is very clear: no one or several skeptical explanations make sense, even to the skeptics themselves. Or [else ]there wouldn’t be so many.

In the book you say that some critics argue that there’s an “Oprah effect”: that a lot of people who have had near-death experiences have heard about them elsewhere first. How do you account for that in your research?
We post to the website the near-death experience exactly as it was shared with us. Given the fact that every month 300,000 pages are read [by] over 40,000 unique visitors from all around the world, the chances of a copycat account from any media source not being picked up by any one of those people is exceedingly remote. Our quality-assurance check is the enormous visibility and the enormous number of visitors.

You say this research has affected you a lot on a personal level. How?
I’m a physician who fights cancer. In spite of our best efforts, not everybody is going to be cured. My absolute understanding that there is an afterlife for all of us — and a wonderful afterlife — helps me face cancer, this terribly frightening and threatening disease, with more courage than I’ve ever faced it with before. I can be a better physician for my patients.

You say we can draw on near-death experiences to reach conclusions about life after actual death. But is that comparing apples and oranges?
Scientifically speaking, interviewing people that have permanently died is challenging. Obviously, given that impossibility, we have to do the next best thing. If these people have no brain function, like you have in a cardiac arrest, I think that is the best, closest model we’re going to have to study whether or not conscious experience can occur apart from the physical brain. The research shows the overwhelming answer is absolutely yes.

You raise the idea that your work could have profound implications for religion. But is whether there is life after death really a scientific question, or a theological one?
I think we have an interesting blend. [This research] directly addresses what religions have been telling us for millenniums to accept on faith: that there is an afterlife, that there is some order and purpose to this universe, that there’s some reason and purpose for us being here in earthly life. We’re finding verification, if you will, for what so many religions have been saying. It’s an important step toward bringing science and religion together.

Is there any aspect of human experience that you don’t think science can touch?
Oh, absolutely. What happens after permanent death — after we’re no longer able to interview people — is an absolute. To that extent, the work I do may always require some element of faith. But by the time you look at [the] evidence, the amount of faith you need to have [to believe in] life after death is substantially reduced.

One Response to Evidence of the Afterlife?