Reincarnation: The Cabinet of Dr. Stevenson 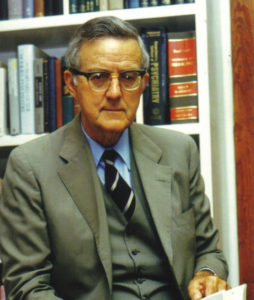 Why, in their past lives, was everybody a princess or mighty warrior? Didn’t anybody dig ditches in the ancient world? Who took out the garbage? Who fed the elephants? Despite these quibbles, reincarnation has many attractions as an idea: it offers us another spin of the wheel; it puts punishment or reward for our deeds into a more credible landscape than the flames or the clouds; it simplifies the question of where all this consciousness goes to or comes from. It’s tidy and sensible, like recycling. And it makes each of us special – if only because we once ruled Egypt.

If you shy away from this seductive principle because it is unscientific, take heart: Professor Ian Stevenson, described by colleagues as “a methodical, careful, even cautious, investigator, whose personality is on the obsessive side,” spent a lifetime documenting instances of “reincarnation-type cases.” A tall, reserved Scots-Canadian, Stevenson had none of the guru about him: kindly but by no means hypnotic eyes peered through functional glasses; tweed, not saffron robes, enveloped his lanky frame. First in his class at McGill medical school, he embraced the self-restrained style of scientific expression: his speeches and papers were the opposite of inflammatory. The only hint of unorthodoxy in his makeup was his mother’s devotion to Theosophy, which he described as “a kind of potted Buddhism for Westerners.” It was in her extensive library on mystical subjects that Stevenson first came across the idea that would occupy his life.

The evidence he presents is this: over 2,500 cases, from cultures around the world, where small children would describe previous lives and deaths they had experienced that turned out to correspond in detail with those of real people whose stories the children could not have known. The most extreme – and therefore most attractive – example was a boy in Beirut who described having been a 25-year-old auto mechanic, killed when he fell from a moving car on a road near the beach. The boy could apparently name the driver of the car and the close relatives of the dead man. Stevenson was as careful of fraud and premature conclusions as a scientist should be; he discounted muddled or clearly self-deluded accounts. Yet some stories simply didn’t submit to a “normal” explanation. Not only stories, in fact: one of Stevenson’s books documents hundreds of cases where the pattern of a child’s birthmarks or birth defects duplicates injuries received in the “past life” that child recalled.

Skeptics naturally shied away from research so redolent of signs and portents, but, to Stevenson’s credit, no one has pointed out obvious blunders in his data collection or reporting methods. It seems scientific – and indeed the problem may actually be with what “scientific” means. Science proposes explanatory hypotheses and then seeks to disprove them by counter-example. A “statistically significant” positive result in experimental science usually means that there is a less than 1-in-20 probability that the results seen were produced by chance alone. A well-conducted experiment isolates a proposed mechanism of causation sufficiently from the surrounding random phenomena to make a statistically-significant result genuinely tell us something about what is going on.

Now, Stevenson never proposed a mechanism; there was nothing here to test – no potential counterexample where a child with the same apparent memories could be shown not to be reincarnated. Stevenson also couldn’t gauge how likely this phenomenon was to appear by chance alone, because the data had selected itself – he only knew about a case because it was unusual. There was no way to isolate these remarkable stories from the other remarkable coincidences that mark life on this numerous earth.

For human life is filled with coincidence; the statistician Warren Weaver mentions hearing a stranger, a German professor at the University of Bogotà, suddenly describe every specimen tree surrounding Weaver’s house in rural Connecticut; he documents two men who, never having met, joined the Army simultaneously, served in the same unit, were the same age, and looked so much alike that they were taken for identical twins; one was named, Baker, the other Cook. There are six billion people on the earth. Even if there is only a one-in-a-million chance that you have a given characteristic, you share it as many others as would fill Carnegie Hall twice over.

Without a proposed mechanism and a method to quantify significance, Stevenson’s observations may have had science’s birthmarks, but not its life. Does that make them bunk? Not at all; but it leaves them, for the moment, outside the province of testable reality. His evidence is about something without explanation – and, unfairly for him, its whiff of the occult is likely to discourage further investigation.

Ian Stevenson died [on February 8] in 2007 – giving him the one chance to attempt an experiment in his otherwise anecdotal field. The combination for the lock on the filing cabinet in his office was set through a mnemonic known only to him. He said that, if he were able, he would attempt to communicate this from beyond the grave to a living consciousness – to prove that human existence is cyclical, and life not merely an arrow shot towards death’s target.