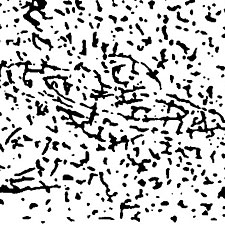 Imagine a time in your life when you felt out of control—anything from getting lost to losing a job. Now look at the top illustration on this page. What do you see? Such a scenario was presented to subjects in a 2008 experiment by Jennifer Whitson of the University of Texas at Austin and her colleague Adam Galinsky of Northwestern University. Their study, entitled “Lacking Control Increases Illusory Pattern Perception,” was published in Science.

Defining “illusory pattern perception” (what I call “patternicity”) as “the identification of a coherent and meaningful interrelationship among a set of random or unrelated stimuli … (such as the tendency to perceive false correlations, see imaginary figures, form superstitious rituals, and embrace conspiracy beliefs, among others),” the researchers’ thesis was that “when individuals are unable to gain a sense of control objectively, they will try to gain it perceptually.” As Whitson explained the psychology to me, “Feelings of control are essential for our well-being—we think clearer and make better decisions when we feel we are in control. Lacking control is highly aversive, so we instinctive­ly seek out patterns to regain control—even if those patterns are illusory.”

Whitson and Galinsky sat subjects before a computer screen, telling one group they must guess which of two images embodied an underlying concept the computer had selected. For example, they might see a capital A and a lowercase t colored, underlined, or surrounded by a circle or square. Subjects would then guess at an underlying concept, such as “all capital As are red.” There was no actual underlying concept—the computer was programmed to tell the subjects randomly that they were either “correct” or “incorrect.” Consequently, they developed a sense of lacking control.

Another group did not receive randomized feedback and so felt more in control. In the second part of the experiment subjects were shown 24 “snowy” photographs, half of which contained hidden images such as a hand, horses, a chair or the planet Saturn, whereas the other half just consisted of grainy random dots. Although nearly everyone saw the hidden figures, subjects in the lack-of-control group saw more figures in the photographs that had no embedded images.

In another experiment Whitson and Galinsky had subjects vividly recall an experience in which they either had full control or lacked control over a situation. The subjects then read scenarios in which the characters’ success or failure was preceded by unconnected and superstitious behaviors, such as foot stomping before a meeting where the character wanted to have ideas approved. The subjects were then asked whether they thought the characters’ behavior was related to the outcome. Those who had recalled an experience in which they lacked control perceived a significantly greater connection between the two unrelated events than did those who recalled an experience in which they had felt control. Interestingly, the low-control subjects who read a story about an employee who failed to receive a promotion tended to believe that a behind-the-scenes conspiracy was the cause.

7 Responses to Why We Rationalize