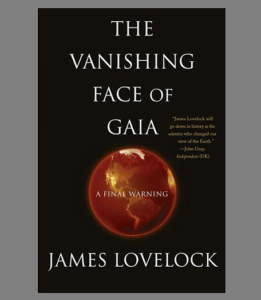 Unlike the big climate shifts of the geological past the one that is presently under way is a result of human activity. Despite a determined rearguard action by so-called sceptical environmentalists, there is no reasonable doubt that greenhouse gases released by industrialisation, together with the destruction of forest for farming and more recently bio-fuels, are at the back of global warming today. Possibly cosmic factors may also be at work – sunspot cycles, or whatever. But a mass of scientific evidence points to humanly produced carbon emissions over the past couple of hundred years as being the primary cause of the current process of global warming.

Humans started this process, and it is easy to conclude that humans can stop it. That has long been the Green refrain, now echoed by politicians in all parties. James Lovelock takes a different view: the planet is not a mechanism that humans can use as they please, winding it up like a clock and then winding it back when it seems to be running too quickly. In some respects functioning as a single organism, the Earth regulates itself so as to maintain conditions suitable to life. Humans are a part of this system, which they will never be in a position to control. The Earth system – Gaia, as Lovelock named it after the Greek Earth goddess – is incomparably more powerful than any human intervention, and when humans disrupt Gaia’s stability she will return to equilibrium without any regard for their interests or plans. That is what is happening at the present time, and there is nothing humans can do to stop the process running its course. As Lovelock puts it in The Vanishing Face of Gaia, which is the definitive statement of the Gaia theory and its implications for the future humans now face: ‘The Earth, in its but not our interests, may be forced to move to a hot epoch, one where it can survive, though in a diminished and less habitable state. If, as is likely, this happens, we will have been the cause.’

There is nothing that humans can do that can bring back the world as it was before global warming began. That does not mean nothing can be done to cope with ongoing climate change, but – rightly – Lovelock dismisses Green schemes for renewable energy as worse than useless. Preserving the rudiments of civilisation in the face of massive environmental disruption requires high-tech solutions – nuclear energy to secure our electricity supply and new techniques of synthetic food production to replace agriculture, for example. These technologies can be used to reduce the human imprint on the planet far more effectively than fashionable Green nostrums. Lovelock also suggests that geo-engineering techniques, such as introducing an aerosol of acid droplets into the stratosphere with the aim of slowing down global warming, should not be rejected out of hand, though he is worried about dangerous side effects.

Most importantly, Lovelock is clear that though technical fixes are indispensable in coping with present and prospective conditions, they cannot return the Earth to stability. The ultimate root of the environmental crisis is the present level of human population:

The disease that afflicts the Earth is not just climate change – manifest by drought, heat and an ever-rising sea. Added to this there is the changing chemistry of the air and the oceans, and the way the sea grows acidic. Then there is the shortage of food for all consumers of the animal kingdom. As important is the loss of that vital biodiversity that enables the working of an ecosystem. All these affect the working of the Earth’s operating system and are the consequences of too many people.

Despite the environmental catastrophes of the last century – including irreparable damage in Soviet Russia and Maoist China, where the belief that there are no natural limits on human expansion was an integral part of the secular state religion – right-thinking opinion in all parts of the political spectrum continues to view Malthus as a hate figure. Most Greens endorse the flabby anti-Malthusian consensus. As Lovelock writes, ‘The fundamental flaw of the green lobbies is revealed in the name Greenpeace; by conflating the humanism of peace movements with environmentalism they unconsciously anthropomorphize Gaia.’ But Gaia has no particular concern for humans, and will not be propitiated by empty gestures such as carbon trading or limits on air traffic. What is needed, in fact, is virtually the opposite of the standard Green mix of wind turbines and organic farms, which could at best enable an overblown human population to eke a precarious living from an overtaxed Earth. If there is a sustainable future it is in a compact, high-tech civilisation with far fewer people.
___________________________

One Response to Review: The Vanishing Face of Gaia