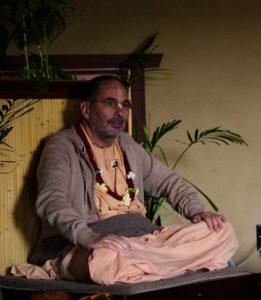 Q. In your commentary on Bhagavad-gita, you wrote that regardless of which path or rung of the ladder of yoga one identifies with, one cannot avoid the spiritual practice involved in controlling the mind and senses. However, some authors like to say that yoga and tantra, even though appearing to go in different directions, reach the same goal; yoga by controlling the senses, and tantra by surrendering to the senses. Is this just a game of words or does your path and the tantric path lead to the same achievement?

A. In my opinion popularized forms of tantra are almost meaningless for spiritual advancement. Tantras are ancient writings that outline religious practices and rituals involving visualization, mantras, meditation, and yoga, among other things. Gaudiya Vaishnavas follow the tantras, but sattvic tantras, such as the Gautamiya Tantra, written for people in the mode of goodness (sattva). What many are fascinated with today is neo-tantra or pop-tantra, names used to describe modern adaptations of the dark or tamasic tantras, which were written for those attracted to the extremes of sexuality, intoxication, the occult, and so forth. In his book Tantra: Path of Ecstasy, the learned Georg Feuerstein writes, “Many are attracted to Neo-Tantrism because it promises sexual excitement or fulfillment while clothing purely genital impulses or neurotic emotional needs in an aura of spirituality. If we knew more about the history of Tantra in India, we would no doubt find a comparable situation for every generation.”

Some tantric literature does encourage overindulging in sensual experience with an aim to create a catharsis that propels one beyond the attraction for sense objects, but this practice itself is dubious, what to speak of modern versions of it. The actual system is quite gruesome and very intense, nothing like that propagated by advocates of today’s neo-tantra.

See also:  Sadhana/Sadhya: The Path and the Goal

Q. Where I live an eclectic style of kirtana has become popular. In these kirtanas the names of a variety of Hindu deities are chanted, and sometimes even Christian, Jewish, and Muslim names for God are sung. I have been attending these events mostly because of a desire to maintain a sense of community with other spiritual seekers. However, my concern is whether participating in these multifaceted kirtanas will adversely effect the development of my devotion to Krishna. Is chanting the names of deities other than Krishna appropriate for those of us trying to be his devotees?

A. If you study the sacred literature, you will find that kirtana is a limb of bhakti and not a limb of other Hindu spiritual paths, such as jnana or yoga. Nowhere in the Hindu canon will you find deities such as Siva or Devi stressing kirtana as Krishna does in the Gita when he characterizes his devotees as those who are always doing kirtana about him (satatam kirtayanto mam). Only Visnu avataras and Krishna in particular make such statements, which has led to a theology of kirtana to be developed around them.

If you study other deities in comparison to Krishna (including Krishna’s avataras), you will understand that worshiping them through kirtana does not apply as readily as it does to Krishna. If you read in the sacred texts what other deities recommend as the means to worship them, kirtana is largely conspicuous by its absence. Meanwhile, Krishna kirtana takes many forms, such as nama and lila kirtana. After all, Krishna is the romantic heart of the Absolute and to sing about him in love is most natural.

It is Krishna who says, “O Narada, I am not in Vaikuntha; nor am I in the hearts of the yogis, but wherever my devotes are chanting my name I am present.” Do Siva or Ganesh say such things? Even Rama does not proclaim this, although as an avatara of Krishna, kirtana is more applicable to him as well. Where is there a liturgy of lila kirtana for any deity other than Krishna? Perhaps to a small degree we find nama kirtana in more obscure and questionable Siva Agamas, but not lila kirtana. The conclusion is that kirtana belongs to Krishna bhakti, where it reaches the zenith of its application and efficacy.

However, even though the scriptures promote Krishna/Visnu kirtana, the kirtana of Krishna nama is so nice that other spiritual paths have adopted the practice of kirtana and begun chanting the names of Siva, Durga, Kali, etc. It appears that Christian, Muslim, and Jewish presence in kirtana is beginning to emerge as well. No harm.

Nonetheless, as faith in one’s personal deity awakens, it is recommended to be single-minded in worship. Love is exclusive while at the same time universal. When one actually loves, one loves One yet all at the same time by way of seeing the multiplicity in relation to the One. In Krishna lila the gopis worshiped Devi, but with the desire to gain Krishna’s hand in marriage. So we worship all divine manifestations by way of seeing them in relation to Krishna. In this sense the names of all Hindu gods can be taken to be names of Krishna, and the names of all goddesses to be names of Radha. Siva means “auspicious,” and Krishna is most auspicious. Durga means difficult (dur) to go (ga) from, like a prison; but durga also means difficult to go to, meaning the service of Radha, being so high, is not easy to attain. This idea represents the ability of advanced devotees to naturally see everything in relation to Krishna, making it possible for them to take part in the kirtana of “om namah sivaya” and think of it in light of Krishna being all-auspicious, and Siva being a manifestation of Krishna.

However, those leading the type of kirtanas you have described are usually promoting something other than suddha-bhakti. Furthermore, it is with devotees like yourself in mind that Bhaktivinoda Thakura wrote, suddha-bhakta anugati kirtana haile sekhana yaya: one should not attend any kirtana unless it is performed under the auspices of a pure devotee (suddha-bhakta). Discrimination characterizes devotees concerned with making steady spiritual progress; for them adhering to these cautionary words from Bhaktivinoda Thakura is essential.

Q. The Srimad-Bhagavatam relates that Dhruva was a pure devotee who entered the spiritual world (Vaikuntha) in his selfsame body. Why then is Dhruva given as an example of materialistic devotion–karma-misra-bhakti? Does it have something to do with Dhruva’s desire to take his mother with him to Vaikuntha?

A. The Bhagavatam story of Dhruva teaches readers about the nature of pure love of Krishna (prema bhakti), which is possessed by the inhabitants of Vrindavana. These lessons inform us directly and indirectly (anvayad itaratah) what prema bhakti is and what it is not.

With regard to Dhruva, we find that he set out to attain a kingdom of his own, one greater than that of Brahma, the demigod of creation. His strategy was to attain this unparalleled kingdom with the help of the all-pervading Godhead, Visnu. In the course of this pursuit, he was graced with the association of the great sage Narada, who being impressed with Dhruva’s determination to meet Visnu, despite his less than spiritual objective, gave him a Visnu mantra and sent him to the forest of Madhuvan in Vrindavana to chant and perform austerity.

In due course Lord Visnu appeared to Dhruva and bestowed upon him the benediction he had sought. However, upon attaining the darsana of Lord Visnu, Dhruva lost all interest in his material objective, realizing how petty earthly gain was in comparison to love of God. In this state of enlightenment, Dhruva prayed for the salvation of his mother, who was the person who had initially inspired him to seek out Lord Visnu for the fulfillment of his material desires.

This is the gist of the story of Dhruva, one that Sri Caitanya Mahaprabhu loved to hear and recite. Mahaprabhu heard this story from Gadadhara Pandit, and he recited it to his mother Saci Devi. This story is very instructive to us, as it teaches that meditation on Visnu, even for a less than spiritual purpose, will bring about a spiritual result. It also informs us not to approach God for material gain, a lesson that Dhruva fully understood upon seeing God. In this sense the story of Dhruva is an example of how not to approach God, as Dhruva’s devotion was karma-misra-bhakti, or bhakti mixed with material desire. Our goal is to aspire for pure devotion unencumbered by any desire for knowledge or material gain, as only this type of devotion can bestow prema—pure love of Krsna.

Still, the determination of Dhruva is laudable and the power of bhakti is evident from the history. Dhruva’s approach is to be followed only in terms of his determination to tread the path to God. With his kind of single-minded determination, we should follow in the footsteps of the inhabitants of Vrindavana as they appeared in this world: as Sri Caitanya and his associates, headed by Rupa and Sanatana Goswamis.

Regarding Dhruva’s desire to take his mother with him, this can be interpreted in various ways. It may be seen as an example of his material attachment, or better yet, his purified respect for the person who initially showed him the path, his vartma-pradarsaka-guru. Taken in the latter sense, we learn from the example of Dhruva the importance of guru-bhakti, as Dhruva refused to enter Vaikuntha without his guru. In this way he placed service to guru (guru-seva) over service to God.

Finally, we learn from the history of Dhruva that the sadhaka-deha, the body of a spiritual practitioner on the path of bhakti, is not an ordinary material body. The Bhagavatam describes how Dhruva left the material world and entered the spiritual abode of Visnu in his selfsame body. Visvanatha Cakravarti Thakura comments that this pastime of Dhruva was revealed by God just to stress the spiritual position of the devotee’s body. Although this is not the norm, we should nevertheless learn to appreciate that even the bodies of sadhakas take on a spiritual quality in proportion to their absorption in devotional practice. The practitioner’s body is thus both material and spiritual at the same time, and eventually it is completely spiritualized—its apparent death a divine illusion. As such, the form of the departed devotee who has attained prema is itself an eternal object of veneration. According to Visvanatha Cakravarti, other than the devotee, no one—not the jnani, yogi, or any other transcendentalist’s body—is completely free from material qualities. He supports his position with Sri Krishna’s words to Uddhava in Srimad-Bhagavatam (11.25.26). Therein the Lord tells Uddhava that one who is free from attachment (the jnani or yogi) remains influenced by sattva, whereas one has taken shelter of him in devotion is free from all material qualities, nirguno mad-apasrayah.