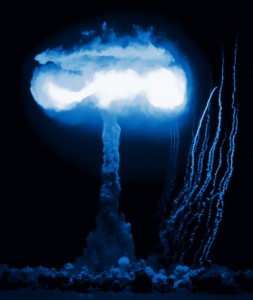 This excerpt originally appeared in In Character with the title The Promethean and Copernican Traditions in Science.

Humility is one of the virtues most heavily stressed, and least practiced, by all great ethical traditions. My biblical concordat contains ninety references to variations on the theme of “walk humbly in the eyes of the Lord.” “Pride cometh before a fall” is the proverb that captures this message.

But humility is just not part of primate nature. Chimpanzees, baboons, and gorillas are very different from each other, but none are humble. Humility is work.

As a practical doctrine, environmentalism most often collides with our current way of doing business and living our lives over exactly this issue of hubris – the assumption that we understand and can calculate the results of our actions when we have only the vaguest awareness of the extent of the interconnections they affect.

So it should not be surprising that science itself is deeply riven over this virtue. In Greek mythology, Prometheus stole fire from the gods and gave it to humankind. This makes him a hero to those scientists who pride themselves on their ability to transform and “conquer” nature, and who consider the natural world the rightful laboratory for their experiments. The apotheosis of Promethean science was the atomic bomb, which once again stole the gods’ fire for mortal use, but the Promethean scientific tradition goes back at least as far as the thirteenth century, to Roger Bacon. Bacon embedded his radical new notion of the control of nature through science in a thoroughly religious context, but over the centuries the modest religious injunction to humility that tethered Bacon atrophied in a progressively secular world.

The first cautionary note against Promethean science – the first hint that humility needed to get back in the picture – came with the atomic bomb. J. Robert Oppenheimer, the manager of the Manhattan Project, greeted the first successful nuclear test with a sobering quote from the Bhagavad Gita: “I am become death, the great destroyer.” Most of the scientists involved in the development of the bomb subsequently pleaded with political leaders for deeper and more restrictive limitations on nuclear technology. But they lost, and the minority, led by Edward Teller, the model for Dr. Strangelove, prevailed. Instead of using nuclear weapons as a cautionary parable and model for a more humble scientific endeavor, the U.S. government offered hallucinatory promises of “electricity too cheap to meter” in the guise of a bold – but utterly arrogant – “Atoms for Peace” program. (Atoms for Peace is still creating mischief, as we hear every day in the news about the Iranian claims to their right to control the nuclear fuel cycle, and the West’s lament that in this case, what they really want is a weapon. Both, of course, are right – that is the fatal flaw in the Promethean perspective.)

But science has a powerful, competing tradition. In medieval times the scientific enterprise was rescued from stagnation in alchemy by measurement, not conquest. Bacon’s great successor, Newton, didn’t engineer new tools for controlling the natural world. He studied the cosmos. Advances in optics and navigational instruments helped launch the age of discovery and helped astronomers understand and explain the universe, particularly the movement of heavenly bodies. Copernicus, who established that Earth revolves around the sun, is the archetype for this approach to science.

The Copernican tradition seeks to explain and understand – not necessarily change – the world. Through observation, Copernicans are continually reminded how complex the world is, and how little of it they comprehend. Consequently, there is a certain humility in their enterprise – although that quality is not, of course, exclusive to any group.

Science is a stochastic process involving both observation and intervention. The ability to observe and understand natural processes rests on the foundation of instruments and technologies that emerge from experimental interventions; even Copernicus needed better glass grinding technology to explore the cosmos. So while the Promethean and Copernican approaches relate to the value of humility in importantly different ways, both are key to the scientific endeavor. Indeed, a fundamental question might be framed, “How do we get the Prometheans to listen to the Copernicans?”

Rachel Carson, for example, was perhaps the most famous recent Copernican. A marine biologist by training, she sounded the alarm about the dangers of chlorinated organic pesticides, particularly DDT, in her groundbreaking bookSilent Spring. Humility was explicitly a core value in Carson’s worldview: “It is a wholesome and necessary thing for us to turn again to the earth and in the contemplation of her beauties to know of wonder and humility.” But the Promethean chemical engineers of Carson’s era blasted – and continue to blast – her as not a true scientist, because she is too humble about science.

Carson’s work helped launch the modern environmental movement. At its heart, environmentalism wove the insights of science into the precepts of traditional ethics, so that “thou shalt not kill” applied not only to a wielded ax or a hurled spear, but to mercury emissions from a coal-fired power plant. The capacity to measure consequences – and the scale of the industrial endeavor that created quite significant consequences – set Copernican and Promethean perspectives at war.

The clash between humility and arrogance, Prometheus and Copernicus, lies not only in the methods of discovery. Today the clash has come to a head over the fate of the climate. The overwhelming data gathered by scientists who measure the world – the Copernicans – strongly suggests that the fossil fuel and chemical revolutions unleashed by the Prometheans are eroding the climatic stabilizers upon which human civilization rests. For twenty years, calls for a little humility – often expressed in the language of buying insurance – have been rejected by the political, economic, and scientific elites of the industrial world.

This response illustrates just how deep the human aversion to humility runs. Faced with measurements showing that unlimited consumption of fossil fuels was destabilizing the climate, the scientists and engineers aligned with the exploitation of nature simply allowed themselves to be corrupted into cooking the books.

With increasing boldness, industry began to fund researchers to parrot its views on topics like global warming and clean air. These Promethean contrarians offer the promise of profligate energy use and industrial expansion with no negative consequences. They rarely published in peer-reviewed scientific literature and sometimes showed a cavalier disregard for basic scientific norms. Thus the Promethean view on global warming is laid out not in scientific journals but in the editorial pages of the Wall Street Journal. The scientists who float these ideas know that the threat from climate change is not just the warming, but the disruption of an anomalous 10,000-year period of climactic stability that enabled humans to develop civilizations.

When political and public pressure for action built, the Prometheans responded with the concept of “geo-engineering,” the idea that perhaps by sending massive quantities of sulfuric acid droplets into the atmosphere, seeding the ocean with iron, or spewing thousands of tiny mirrors into space we could undo the “warming” caused by massive buildups of carbon dioxide.

Scientists – of either variety – have a difficult time when their roles morph from doing science to informing the public. They are not by temperament communicators. They are truth finders, but the habits that make truth tellersare different. Galileo, with his putative “nonetheless it moves” sotto vocecomment, is the first recorded example of this squirming. The awkward conversations among climate scientists about how to explain to the public that we really ought to be doing something about climate change even if the computer models show substantial uncertainty are the most recent. But the Copernicans have a disadvantage – unlike the Prometheans they have no “gee whiz” technology – think fire – to bring to the party – they are more purely judged by their evaluations. By and large the public is too impatient to listen carefully, which can easily lead the scientific community into telling people what they think they need to hear, instead of what the science says. The recent leaks of climate science memos in which some of the climate scientists urged squelching awkward data points is one example – and an earlier and far more consequential one was the decision by the nuclear fraternity after World War II to pretend that radiation was almost a friendly neighbor to human beings, to avoid a public panic about the nuclear deterrence strategy.

The geo-engineering debate brings into harsh contrast just how addictive the concept of “mastery” is for primates. While some geo-engineering projects might, in theory, lower mean temperatures, none would curb the continual unraveling of the micro-climates on which individual agricultures or urban societies depend. (The sulfuric acid project, for example, would greatly accelerate the alarming acidification of the ocean that terrifies Rachel Carson’s successors in the field of marine biology.) So geo-engineering can’t solve the problem it proposes to, but how seductive it is to play with the idea of intentionally – as opposed to merely accidentally – controlling the shape of our planet.

Climate scientists warn us that time to reverse course and display humility is short. The strong and arrogant “try it out” traditions of chemistry, engineering, biotechnology, and nuclear physics have the bit in their mouths and are not prepared to be reined in. In recent decades, however, technological innovation has shifted to the fields of electronics and genetics. While these advances have given the Prometheans vast and potentially destructive new powers, they may ultimately prove more useful to the watchful Copernicans. Computer technology, modern optics, and advances in cellular biology have dramatically increased scientists’ ability to monitor the global atmosphere, map genetic differences among closely related species, and detect the buildup of dangerous hormone-mimicking chemicals in human tissues, to name a few. As a result of their new powers of observation, many scientists are becoming increasingly uncomfortable with what their instruments are telling them, and increasingly worried about what the Prometheans have wrought.