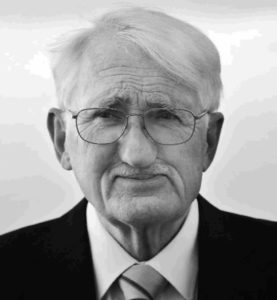 The German philosopher Jürgen Habermas has long been recognized as the most persistent and influential defender of an Enlightenment rationality that has been attacked both by postmodernism, which derides formal reason’s claims of internal coherence and neutrality, and by various fundamentalisms, which subordinate reason to religious imperatives that sweep everything before them, often not stopping at violence.

In his earlier work, Habermas believed, as many did, that the ambition of religion to provide a foundation of social cohesion and normative guidance could now, in the Modern Age, be fulfilled by the full development of human rational capacities harnessed to a “discourse ethics” that admitted into the conversation only propositions vying for the status of “better reasons,” with “better” being determined by a free and open process rather than by presupposed ideological or religious commitments: “…the authority of the holy,” he once declared, “is gradually replaced by the authority of an achieved consensus.”

In recent years, however, Habermas’s stance toward religion has changed. First, he now believes that religion is not going away and that it will continue to play a large and indispensable part in many societies and social movements. And second, he believes that in a post-secular age — an age that recognizes the inability of the secular to go it alone — some form of interaction with religion is necessary: “Among the modern societies, only those that are able to introduce into the secular domain the essential contents of their religious traditions which point beyond the merely human realm will also be able to rescue the substance of the human.”

The question of course is what does Habermas mean by “introduce”? How exactly is the cooperation between secular reason and faith to be managed? Habermas attempted to answer that question in the course of a dialogue with four Jesuit academics who met with him in Munich in 2007. The proceedings have now been published in Ciaran Cronin’s English translation (they appeared in German in 2008) under the title “An Awareness of What is Missing: Faith and Reason in a Post-secular Age.”

Habermas begins his initial contribution to the conversation by recalling the funeral of a friend who in life “rejected any profession of faith,” and yet indicated before his death that he wanted his memorial service to take place at St. Peter’s Church in Zurich. Habermas decides that his friend “had sensed the awkwardness of non-religious burial practices and, by his choice of place, publicly declared that the enlightened modern age has failed to find a suitable replacement for a religious way of coping with the final rite de passage.” The point can be sharpened: in the context of full-bodied secularism, there would seem to be nothing to pass on to, and therefore no reason for anything like a funeral.

To be sure, one could regard funerals for faith-less persons as a vestige of values no longer vital or as a concession to the feelings and desires of family members, but Habermas chooses to take it seriously “as a paradoxical event which tells us something about secular reason.” What it tells us, he goes on to say, is that secular reason is missing something and without it threatens to “spin out of control.”

What secular reason is missing is self-awareness. It is “unenlightened about itself” in the sense that it has within itself no mechanism for questioning the products and conclusions of its formal, procedural entailments and experiments. “Postmetaphysical thinking,” Habermas contends, “cannot cope on its own with the defeatism concerning reason which we encounter today both in the postmodern radicalization of the ‘dialectic of the Enlightenment’ and in the naturalism founded on a naïve faith in science.”

Postmodernism announces (loudly and often) that a supposedly neutral, objective rationality is always a construct informed by interests it neither acknowledges nor knows nor can know. Meanwhile science goes its merry way endlessly inventing and proliferating technological marvels without having the slightest idea of why. The “naive faith” Habermas criticizes is not a faith in what science can do — it can do anything — but a faith in science’s ability to provide reasons, aside from the reason of its own keeping on going, for doing it and for declining to do it in a particular direction because to do so would be wrong.

2 Responses to Jurgen Habermas’ Thoughts on Reason and Faith