The Theft of Yoga 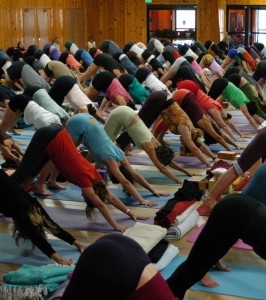 Nearly 20 million people in the United States gather together routinely, fold their hands and utter the Hindu greeting of Namaste — the Divine in me bows to the same Divine in you. Then they close their eyes and focus their minds with chants of “Om,” the Hindu representation of the first and eternal vibration of creation. Arrayed in linear patterns, they stretch, bend, contort and control their respirations as a mentor calls out names of Hindu divinity linked to various postures: Natarajaasana (Lord Shiva) or Hanumanasana (Lord Hanuman) among many others. They chant their assigned “mantra of the month,” taken as they are from lines directly from the Vedas, Hinduism’s holiest scripture. Welcome to the practice of yoga in today’s western world.

Christians, Jews, Muslims, Pagans, agnostics and atheists they may be, but they partake in the spiritual heritage of a faith tradition with a vigor often unmatched by even among the two-and-a half-million Hindu Americans here. The Yoga Journal found that the industry generates more than $6 billion each year and continues on an incredible trajectory of popularity. It would seem that yoga’s mother tradition, Hinduism, would be shining in the brilliant glow of dedicated disciples seeking more from the very font of their passion.

Yet the reality is very different. Hinduism in common parlance is identified more with holy cows than Gomukhasana, the notoriously arduous twisting posture; with millions of warring gods rather than the unity of divinity of Hindu tradition–that God may manifest and be worshiped in infinite ways; as a tradition of colorful and harrowing wandering ascetics more than the spiritual inspiration of Patanjali, the second century BCE commentator and composer of the Yoga Sutras, that form the philosophical basis of Yoga practice today.

Why is yoga severed in America’s collective consciousness from Hinduism? Yoga, meditation, ayurvedic natural healing, self-realization–they are today’s syntax for New Age, Eastern, mystical, even Buddhist, but nary an appreciation of their Hindu origins. It is not surprising, then, that Hindu schoolchildren complain that Hinduism is conflated only with caste, cows, exoticism and polytheism–the salutary contributions and philosophical underpinnings lost and ignored. The severance of yoga from Hinduism disenfranchises millions of Hindu Americans from their spiritual heritage and a legacy in which they can take pride.

Hinduism, as a faith tradition, stands at this pass a victim of overt intellectual property theft, absence of trademark protections and the facile complicity of generations of Hindu yogis, gurus, swamis and others that offered up a religion’s spiritual wealth at the altar of crass commercialism. The Maharishi Mahesh Yogi, under whose tutelage the Beatles steadied their mind and made sense of their insane fame, packaged the wonders of meditation as Transcendental Meditation (TM) just as an entrepreneur from here in Minneapolis applied the principles of Ayurveda to drive a commercial enterprise he coined as Aveda. TM and Aveda are trademarked brands–a protection not available to the originator of their brand—Hinduism itself. And certainly these masters benefited millions with their contributions, but in agreeing to ditch Hinduism as the source, they left these gifts orphaned and unanchored.

6 Responses to The Theft of Yoga