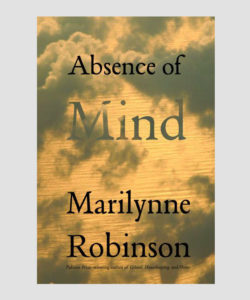 From the Globe and Mail:

Marilynne Robinson, Absence of Mind: The Dispelling of Inwardness from the Modern Myth of the Self. New Haven: Yale University Press, 2010.

The power of imagination that makes a novelist seldom goes together with the analytical abilities needed to be a philosopher. George Santayana wrote The Last Puritan (1935), a bestseller and also a fine novel, but in this as in many other respects the Spanish-American philosopher was highly unusual. There have been very few novelist-philosophers, and in recent times most of that small number – the business-class Nietzschean Ayn Rand, for example – have been noteworthy for the childishly primitive quality of their thinking.

One of the great writers of fiction, Pulitzer Prize-winner Marilynne Robinson (for Gilead, in 2005) may be the only living novelist who has made a genuine contribution to philosophical reflection. Comprising four closely reasoned and richly imaginative chapters based on a distinguished lecture series at Yale, Absence of Mind is one of the most thought-stirring inquiries into fundamental questions that has appeared in many years.

Robinson aims to clarify the relations of science with religion, a subject on which it might seem difficult to say anything that is at once new and illuminating. She succeeds not by defending religious belief but by examining the claims for science made by enemies of religion. Her target is not science itself, but the “para-scientific” ideologues that claims to explain consciousness in reductively materialist terms. Most influential among these ideologues, Richard Dawkins and his followers have argued that the ability to turn back on oneself and look into one’s thoughts, a type of “inwardness” that seems peculiarly human, is an accidental product of natural selection.

Demonstrating a command of the history of ideas that few contemporary philosophers can boast, Robinson argues that this neo-Darwinian attempt to supply “the one thing needful, the one sufficient account for literally everything” is only the latest in a long line of similar efforts, none of which can properly account for what she describes as “the great fact of human exceptionalism.”

Writing with forceful elegance, Robinson shows how in the reductive ideology that animates much recent evolutionary theory, “reflection and emotion are only the means by which the genes that have colonized us manipulate us for their purposes.” She argues persuasively that when human experience is explained in this way, phenomena such as altruism are reduced to “illusory sensations,” a conclusion that goes against the experience and testimony of humankind.

Absence of Mind is a gush of fresh air in the controversy over science and religion, a book that anyone who wants to see beyond the stale platitudes of current debate has a duty to read. Yet Robinson seems to me to fall short in her central thrust, which is to put the human mind back at the centre of things. One reason lies in the terms in which she frames the debate. When she challenges the reductionist claim that “the Western understanding of what a human being is has been fundamentally in error,” it is not difficult to see why non-Western philosophies are left out of the picture. Quite a few non-Western thinkers would agree with Robinson that materialism is an incomplete account of things without believing there is anything particularly special about human consciousness. The transmigration of souls from humans to other animals and back again features in ideas of reincarnation in many religions and philosophies (including some in ancient Greece and Rome). In some strands of Hinduism and Buddhism, humans are figures in the dream of an impersonal super-mind – a view not all that different from Plato’s, which was revived by 19th-century German philosopher Arthur Schopenhauer. If we move beyond currently dominant versions of Western thought, it becomes clear that there is no connection between rejecting materialism and asserting that human consciousness is in any way special.

At the same time, it is far from obvious that neo-Darwinian ideologues have abandoned human exceptionalism. Just like the monotheists they obsessively attack, Dawkins and his followers believe that consciousness makes humans categorically different from their animal kin. To be sure, these ideologues insist (they always insist) that consciousness emerged without any kind of supernatural intervention. Now that consciousness has appeared among humans, they – or at least the most advanced members of the species, the self-styled “brights,” as Dawkins and his followers describe themselves – can master the blind forces of evolution. As he put it at the end of The Selfish Gene, “We, alone on earth, can rebel against the tyranny of the selfish replicators.” There is nothing in science that warrants such a claim, which simply reasserts the Judeo-Christian faith in free will.

Today’s Darwinian missionaries are vehement opponents of religion. That does not mean their thinking is not still shaped by religious ideas. On the contrary, they have renewed one of the central concepts of monotheism, which is the idea of human uniqueness. But it is not clear that consciousness is peculiarly human; as Aristotle recognized long ago, dolphins display many signs of conscious awareness. Who can say that they do not also have their own kind of inwardness?

Whatever the answer may be, the true obstacle to reductive materialism lies somewhere else. What is truly mysterious is not the capacity for inwardness, which is a byproduct of language. It is the outer world of sensation, the realm of vision and sound, touch and smell in which we live. Before the emergence of complex forms of life, the environments that humans and other animals experience weren’t simply unperceived. They didn’t exist. Will we ever fully grasp the unimaginably strange process whereby the physical universe has spawned these virtual worlds? The mystery isn’t inside us. It’s all around us.

One Response to Review: Absence of Mind