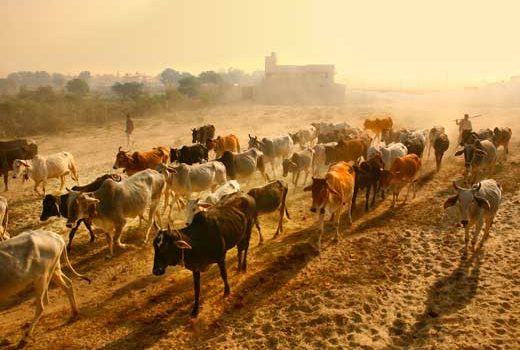 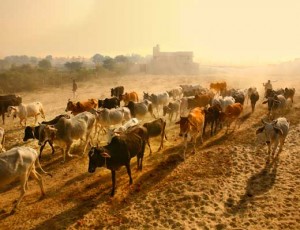 Excerpted from a discussion on Brahma-vimohana-lila by Swami Tripurari

Seeing the cows and elderly cowherds rush to greet their calves and sons, Balarama was concerned that the very essence of Vrindavana seemed to be lost. How could maya enter into the Lord’s domain?

But on this occasion, Balarama saw just the opposite. Krishna was coming back from the forest, and instead of running to get the darsana of Krishna, practically he was ignored, and the children and calves were treated with love as if they were Krishna himself. Balarama thought, “Oh, how can this be? Has maya entered here? Maybe we’ve all fallen from Vaikuntha.”

Philosophically it’s not possible, but it appeared as if maya-sakti had entered the spiritual world. Maya has no standing in Vrindavana, “maya ca tad apasrayah.” Vyasa saw her keeping a distance (apasrayah), embarrassed to approach the Lord directly on account of her task of punishing and chastising the conditioned souls, providing negative impetus to push them in the direction of their highest prospect. So Balarama was concerned, “What’s happening here, ahetu-vid acintayat?” Then he reasoned, “No, it’s not possible for maya to enter here. This must be something divine.”

Previously Balarama had conceived of the cowherd boys as rsis and devas who had joined the nitya-lila—sadhana siddhas. As Sukadeva previously stated, it is possible to attain this status as one of Krishna’s eternal friends, “sakham vijahruh krta-punya-punjah.” They are so dear to Krishna. He knows them so well—their hearts—that he could manifest replicas of them such that their parents could not tell they were not their own sons. The mothers of the boys loved these replicas more because ontologically speaking they were Krishna himself. Yet Krishna, even after manifesting himself in the form of replicas of the cowherd boys, could not be satisfied until the original boys were returned. When they were returned, he extended his kumara-lila another year for their sake.

Everyone in Vrindavana loves Krishna more than themselves or anyone else, and Krishna loves his Vrindavana devotees more than his own self. We cannot imagine how much he loves the cowherds. Sanatana Goswami teaches us in Brhad-bhagavatamrta that each and every one of the cowherd boys feels that Krishna loves him the most, and each and every one of them is absolutely right. Krishna loves them dearly, and the cowherd boys love him so much that even if he even momentarily goes behind a tree, they cannot bear to lose sight of him for such a brief period.

Once when Sridhara Maharaja conjectured that Prabhupada—who left the world in the midst of translating this very lila—had affinity for sakhya-rasa, some of our godbrothers complained that he was criticizing him, but Sridhara Maharaja replied in utter amazement, “Do they think it is a bad thing? I thought it was rather a compliment.”

After pondering the situation philosophically Balarama could understand that these cowherd boys and calves were Krishna himself. Otherwise, how could these cowherds and cows be so attracted to these boys and calves? If it were for another reason—the influence of mahamaya—then the very heart of Vrindavana would be lost. This is the contrast between the material and spiritual worlds. In Vrindavana everything is Krishna-centered, and in the material world everything is self-centered. If we want to enter Krishna lila, we must start here.

When we find selfishness in ourselves, we must convert it into selfless action. From this the heart will be purified, self knowledge will arise, and devotion proper becomes a real possibility, “mad bhaktim labhate param.” This is the simple formula for actually understanding the most complex theology. Krishna lila in Vrindavana is not a story for our entertainment. If we listen closely from the right person, we will understand that it has an agenda for radical change, and we are on it. It is both beautiful poetry and a bitter pill at the same time.

Once at Gita Nagari Prabhupada spoke about Vrindavana. We were standing in the barn and there were elders and children, cows and calves, there was a dog and a cat, and a mouse ran by. Everybody noticed the mouse. It ran right in front of Prabhupada. Suddenly Prabhupada turned and said with big eyes, “Did you see it? The adults and the children, the cows and calves, the cat and the dog, and the mouse, all living harmoniously—this is Vrindavana.”

The next morning Prabhupada turned to me again and asked, “Did you see it?” “See what, Prabhupada?” I asked. He said, “There were the cows and the calves, the adults and the children, the cat, the dog, and the mouse—all living harmoniously. This is Vrindavana.”

As it will be stated later in the narrative of this lila, yatra naisarga durvairah sahasan nr-mrgadayah mitranivajitavasa-druta-rut-tarsakadikam, “Vrindavana is that place where there is no hunger or thirst, and beings naturally inimical to one another live in harmony.”

This harmony that is realized in selfless love is Vrindavana. As Sri Jiva Goswami has said, “Vraja” implies that place in which all things are completely appropriate. We are not to deny anything, rather to find the appropriate center around which all things can be harmonized. This center is Krishna, and real service to Krishna involves loving one another in concurring to love Krishna.

We love our body because we are within it in the sense that we have identified with it. If we are introspective, we can understand that it is the self that we love, not the body, for as our body changes and we change bodies we continue to love the body we have identified with, not caring for the one’s we have left behind. It is the self that is dear to us—more so than our bodies—and this self is a particle of Krishna’s jiva-sakti.

As the self is more dear than the body, Krishna is more dear than the self. Thus if we understand ourselves, we will understand that Krishna is the most dear object and learn to love him. Try to do that and thereby love one another. Get used to one another, because no one is going anywhere. We are all in this together, forever and ever. If you must change anything, change yourself.

7 Responses to Did You See It?