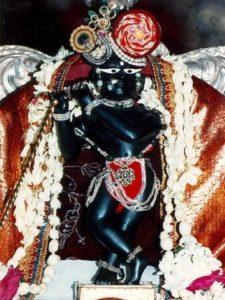 B. R. Sridhara Deva Goswami on Sri Raghunatha dasa Goswami (From Sermons of the Gaurdian of Devotion: Volume Two.)

Srila Raghunatha dasa Goswami appreciated the acme of divine service, the culminating point of divine service, Radha dasya , which is servitude unto Srimati Radharani. Therefore he is called the prayojanacarya. Srila Sanatana Goswami is generally conceived of by his successors as the acarya of sambandha-jnana. Sambandha refers to “what is what”—”what is my position in the spiritual hierarchy.” That was explained most clearly by Srila Sanatana Goswami. And abhidheya, what we should cultivate in order to attain to our objective—was mainly given by Srila Rupa Goswami. He taught us how we can attain fulfillment of our life in the domain of love. And what is particularly the highest point of our attainment, or prayojana, was very vividly shown by Srila Raghunatha dasa Goswami. In his famous sloka he says:

This sloka has given us the highest conception of our attainment in the school of Sri Caitanya Mahaprabhu. What is that? Srila Raghunatha Goswami is addressing Srimati Radharani: “O Queen of my heart, for a long, long time I am waiting with great patience to have your mercy, which is so sweet to me that I cannot avoid it. It is heart-melting, heart-attracting, heart-crushing. It is so deeply touching me, I can’t avoid your service connection. Somehow I have managed to come such a long way, to endure such a long time, but I am impatient now. Be gracious; if you are not gracious upon me, I have got no hope. I will come to the end of my patience.

“So please be gracious upon me. You are all-in-all. Without you, Krishna consciousness is not Krishna consciousness. Your position is so great, so beautiful in Krishna lila. You are the center of all the lila of Krishna. Without You I can’t conceive of any life worth living. I utterly surrender unto You, my Queen.

This is Radha dasya . Our best fulfillment is in the service of Sri Radha, because only she can fully attract the grace of Krishna. She is the other half who can draw the maximum rasa, ecstasy, from Krishna, in quantity as well as in quality. So those who are serving Srimati Radharani get the highest type of qualitative rasa from Krishna in reciprocation for their service. That cannot be had through any other channel. Service that comes through Srimati Radharani is of the highest quality, so her service should be our summum bonum of life. This was announced clearly by Srila Raghunatha dasa Goswami who is considered to be prayojanacarya , the guide to show us our highest fulfillment of life. By our association with this day and by our humble attempt to discuss all these matters, we may be benefited in the achievement of our goal. This is the day of the advent of such great personalities
_____________________

Swami B. V. Tripurari on Sri Gopala Bhatta Goswami (From a 1997 discourse.)

Gopala Bhatta is also a sastra-guru of our bhakti sastra. As I mentioned, under the guidance of Sanatana Goswami, he compiled the Gaudiya Vaisnava smrti, Hari- bhakti-vilasa. In this book and his Sat-kriya Sara Dipika he has given all the behavioral codes and ritualistic procedures for our sampradaya. Although he is most well known for these works, he was also a principal contributor to Jiva Goswami’s Sat-sandarbha. In each of the six sandarbhas, Sri Jiva offers his respect to Gopala Bhatta Goswami, noting that his own work on the sandarbhas is merely what he considered a rearranging of notes gathered by Gopala Bhatta Goswami.

Perhaps Gopala Bhatta Goswami is best known for having established the Radha-Ramana deity and temple in Vrindavana. This event is connected to the story of his collecting Salagramas at Mahaprabhu’s request. After arriving in Vrindavana, he worshipped the Salagramas, keeping them around his neck or hanging them from a tree in a basket. Great kings patronized the Goswamis in Vrindavana. Under their patronage, big temples were built, and through the preaching of the Goswamis, Vrindavana became the place to be. If you were a Hindu king and you did not have a temple in Vrindavana, you were nobody.

When Gopala Bhatta received the offering of ornaments and clothing from one wealthy patron, he placed it before his Salagramas and lamented on two accounts. First of all, he could not use the ornaments for the Salagramas, as they were suitable for a deity in human form. Secondly, he lamented because Mahaprabhu had promised that Gopala Bhatta would again get his darsana, but this had not come to pass. Mahaprabhu was in Puri, and although he sent Gopala Bhatta his kaupina and asana, he had not personally come to give him darsana.

Lamenting on two accounts, Gopala Bhatta became unconscious on the Buddha Jayanti after contemplating the significance of Prahlada Maharaja’s experience of Sri Narasimha. When he awoke, he noticed that the lid of the basket hanging from the tree was half open. He thought that perhaps a snake had gotten inside, so he tried to push the lid down, but it would not go down. When he opened it up, there was Radha-Ramana! The Damodara salagram had manifested as a one foot deity of Krishna in a pose playing the flute. It is considered that Radha-Ramana was the fulfillment of Mahaprabhu’s promise to give Gopala Bhatta his darsana a second time. Radha-Ramana is considered to be Radha and Krishna combined. He is thus nondifferent from Mahaprabhu. Since that day, Gopala Bhatta Goswami’s desire to offer ornaments to his deity have been more than fulfilled, as worship of Radha-Ramana has been in place for over 500 years. Indeed, he is perhaps the best dressed deity in town.