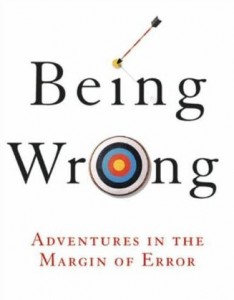 Kathryn Schulz. Being Wrong: Adventures in the Margin of Error. Ecco/HarperCollins, 2010.

In 1650, Oliver Cromwell asked the Church of Scotland to reconsider its decision to side with the royalists instead of him. “I beseech you, in the bowels of Christ, think it possible you may be mistaken.” The church didn’t think it possible, of course, so Oliver’s army took Scotland.

According to Kathryn Schulz, each of us is our very own Church of Scotland — ­often mistaken, oddly oblivious and typically immune to a good beseeching. ­“Being Wrong: Adventures in the Margin of Error” is an insightful and delightful discussion of the errors of our ways — why we make mistakes, why we don’t know we are making them and what we do when recognition dawns.

Schulz begins with a question that should puzzle us more than it does: Why do we love being right? After all, she writes, “unlike many of life’s other delights — chocolate, surfing, kissing — it does not enjoy any mainline access to our biochemistry: to our appetites, our adrenal glands, our limbic systems, our swoony hearts.” Indeed, as she notes, “we can’t enjoy kissing just anyone, but we can relish being right about almost anything,” including that which we’d rather be wrong about, like “the downturn in the stock market, say, or the demise of a friend’s relationship or the fact that at our spouse’s insistence, we just spent 15 minutes schlepping our suitcase in exactly the opposite direction from our hotel.”

Schulz teases out answers to this question over two rather different halves of her book. In the first half, she conducts a scientific tour of everyday wrongness that includes optical illusions, memory failures, neurological deficits and irrational beliefs, describing how they arise, how they are perpetuated by those around us and why we find it so difficult to see them for what they are. Much of this territory will be familiar to readers of such recent popular psychology titles as “Mistakes Were Made (But Not by Me)” or “The Invisible Gorilla.” Although Schulz, a journalist, covers this material less expertly than the experts, she compensates by drawing on a wider pool of informants, from Wittgenstein to Hamlet to Alan Greenspan. By the end of the tour, we have a pretty good sense of why we see what isn’t there, believe what isn’t true and remember what didn’t happen.

Schulz then shifts from origins to experience — from “how our senses, our minds and our allegiances can all lead us into ­error” to “how we react when our convictions collapse out from under us, and how we are changed by that experience.” This shift in perspective is accompanied by a sudden shift in form that compels Schulz to pop out of her narrative after 249 ­pages and discuss her plan with the reader. Hearing no objections, she offers several chapters that tell personal stories in classic New Yorker style (“On April 4, 1968, the day that Martin Luther King Jr. was killed, Claiborne Paul Ellis threw a party”). Case histories of a Klansman who became an unlikely advocate for civil rights, of a doomsday prophet whose apocalypse wasn’t now, of a sexual assault victim whose mistaken testimony jailed an innocent man allow Schulz to explore what happens to us when our wrongness is exposed and we must accept it, deny it or be transformed by it. The stories are mainly gripping and always well told, though sometimes more powerful than the points they are meant to illuminate.

From the expository first half through the character-driven second, Schulz remains good company — a warm, witty and welcome presence who confides in her readers rather than lecturing them. It doesn’t hurt that she combines lucid prose with perfect comic timing: “Witness, for instance, the difficulty with which even the well-mannered among us stifle the urge to say ‘I told you so.’ The brilliance of this phrase . . . derives from its admirably compact way of making the point that not only was I right, I was also right about being right. In the instant of uttering it, I become right squared, maybe even right factorial, logarithmically right — at any rate, really, extremely right, and really, extremely delighted about it.”

Schulz is not just a quotable writer; she is also a canny and original observer ­adept at pointing out things that we should have known, but didn’t. For example, she suggests that one reason people are so wildly overconfident in the accuracy of their beliefs is that being wrong has no telltale phenomenology. We know what it feels like to have been wrong in the past, perhaps just seconds ago, but not what it feels like to be wrong in the present, because the instant we realize that what we believe is wrong, we no longer believe it. “It does feel like something to be wrong,” she says. “It feels like being right.” When Schulz suggests that memory and imagination are essentially forms of error — the perception of events that aren’t actually happening — we wonder what she could be thinking, and why we didn’t think of it first.

“Being Wrong” is smart and lively, but not without its faults. Schulz promises what she calls a “wrongology” but never builds the systematic arguments that “­-ology” requires. Instead we get a “wrongologue” — a series of observations and insights that leave us feeling that we’ve had all the good thoughts one could possibly have about wrongness, but that we still don’t know which ones are . . . well, right. Compelling points are not assembled into necessary conclusions, and so her book ends up being the sum of its parts, but not more.

Error, though, is a sweeping subject, and a rigorous wrongology may be too much to ask of anyone. Schulz tells us early on that her goal is “to foster an intimacy with our own fallibility” and to “linger for a while inside the normally elusive and ephemeral experience of being wrong.” These goals she accomplishes with aplomb. For most of us, errors are like cockroaches: we stomp them the moment we see them and then flush the corpse as fast as we can, never pausing to contemplate the intricate design of nature’s great survivor, never asking what it might reveal beyond itself. But Schulz is the patient naturalist who carefully examines the nasty little miracles the rest of us so eagerly discard.

This review originally appeared in the New York Times.

9 Responses to Review: Being Wrong