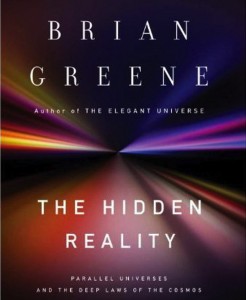 Brian Greene, The Hidden Reality: Parallel Universes and the Deep Laws of the Cosmos. Knopf, 2011.

When Moses asks to see who or what he has been conversing with on Mount Sinai, he is placed in a crevice and told to look out once the radiance has passed (no peeking now!). Anything more than a glimpse of God’s receding back, the story implies, would blow his mortal fuses. The equivalent passage in Hindu scripture occurs in the Bhagavad-gita – and, as befitting that most frank of all religions, is more explicit about the nature of the fatal vision. Krishna responds to the warrior Arjuna’s request by telling him that no man can bear his naked splendor, then goes right ahead and gives him the necessary upgrade: “divine sight”. What follows is one of the wildest, most truly psychedelic episodes in world literature.

No longer veiled by a human semblance, Krishna appears in his universal aspect: a boundless, roaring, all-containing cosmos with a billion eyes and mouths, bristling with “heavenly weapons” and ablaze with the light of a thousand suns. The sight is fearsome not only in its manifold strangeness but because its fire is a consuming one. “The flames of thy mouths,” a horrified Arjuna cries, “devour all the worlds … how terrible thy splendors burn!”

Until recently, a physicist would have regarded this scene as the picturesque delirium of a pre-scientific age. Most still would. And yet the contemplation of the unspeakable flowering of an infinity of worlds is no longer the province of “mystics, charlatans and cranks”, as the leading string theorist Michio Kaku has written, but instead occupies “the finest minds on the planet”. Welcome to the multiverse.

Five hundred years ago, the western mind considered itself the lordly possessor of a solid, unmoving world. It was as recent as the 1920s that Edwin Hubble found galaxies beyond our own, then realised they were racing away from us (some faster than the speed of light, a supposedly impossible feat that is allowed here since it’s not the galaxies that are moving but space that’s expanding – got it?). And now, as the latest in an increasingly vertiginous series of perspectives, comes the chance that the universe is but one among many: a leaf in a cosmic wood. What is more – as Brian Greene notes in this progress-report on what some are calling the golden age of cosmology – such ideas are not the fevered speculation of autistic savants but “emerge unbidden” from the calculations of physicists.

The multiverse can have several forms, depending on the theoretical path you take. In the Quilted Multiverse, Greene explains, the universe’s infinite extension in space leads to worlds necessarily repeating themselves (like the endless library in the Borges story, which contains not only every conceivable book but a multitude of “imperfect facsimiles: works which differ only in a letter or a comma”). In the Inflationary Multiverse, universes randomly pop into being like holes in a hyperspatial emmental, then fly apart as the cheese itself – the technical term is “inflaton field” – grows at an exponential rate. It is the stuff of delirium. The Brane Multiverse posits other, unseen universes hovering a whisker from our own. In the chapter on the Simulated Multiverse, Greene sees our universe is a virtual one programmed by an alien civilisation. (As he wryly puts it: “evidence for artificial sentience and simulated worlds is grounds for rethinking the nature of your own reality”.)

The mother of them all is what Greene calls the Ultimate Multiverse, which states that any world that can be mathematically modelled – or even imagined – must perforce exist. We are back to Arjuna, agog in front of a reality that encompasses “the visions from thy innumerable eyes, the words from thy innumerable mouths”. It is a joyfully bewildering concept that flags up the impossibility of the endeavour; surely trying to define All That Exists is like trying to box the wind or weigh a dream. What seems certain, as Greene writes, is that “what we’ve thought to be the universe is only one component of a far grander, perhaps far stranger, and mostly hidden, reality.” And what a delicious irony it is that science, that model of sober investigation, is inexorably returning us to vistas so peculiarly like the deranged imaginings of our “superstitious” past.

3 Responses to Review: The Hidden Reality