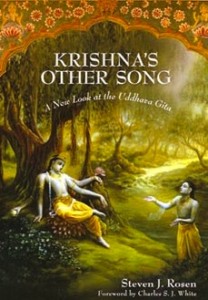 Steven J. Rosen (Satyaraja Dasa) is one of the most prolific of our modern Gaudiya Vaishnava authors, with innumerable books and articles to his credit. Not only is his production large, it is also extremely variegated: he has authored everything from Vaishnava hagiography (Black Lotus: The Spiritual Journey of an Urban Mystic) to interfaith dialogues (Krishna Consciousness and Christianity: East-West Dialogues), popular presentations on vegetarianism and spirituality (Diet for Transcendence: Vegetarianism and the World Religions), and scholarly presentations on Vaishnava Hinduism (Essential Hinduism). Additionally, in several books he has engaged in a fruitful dialogue with popular culture (e.g. In Defense of Reality, Jedi in the Lotus: a Hindu Perspective on Star Wars). Many are the young Krishna devotees that have been inspired by his way of showing that one can walk the bhakti path without turning into an automaton or losing one’s sense of what’s happening. On top of this, Steven Rosen is also founding editor of Journal of Vaishnava Studies, an important academic journal that will soon celebrate its twentieth year of continuous publication.

In Krishna’s Other Song, Steven Rosen attempts something new: scriptural commentary. As the title indicates, he has done so with Krishna’s better-known Gita before (Krishna’s Song: a new look at the Bhagavad Gita, 2007), but while Krishna’s Song was a collection of essays on the Bhagavad-gita, Krishna’s Other Song is a translation of and commentary on the original verses of a related text, the Uddhava-gita. The reason for this difference is not difficult to understand: while there are many different Vaishnava Bhagavad-gitas readily available, there is a clear need for a readable Uddhava-gita from Vaishnava perspective. By leaving out the Sanskrit and keeping the commentary short and to the point, Rosen manages to present the whole Uddhava-gita in less than 300 pages. Hardbound and with an attractive cover, this makes for very appealing packaging.

What about the contents, then? First of all, it is no mean feat that Rosen has managed to engage noted Hinduism scholar Charles S.J. White to write a brief but very informative and positive Foreword. This is followed by a brief Introduction, in which Rosen locates the Uddhava-gita within its larger context, the Bhagavata Purana, but also offers the reader some hints into the uniquely Gaudiya Vaishnava insights on Uddhava, as detailed in works such as Rupa Goswami’s Uddhava Sandesha. Rosen then gives a very useful summary of the Uddhava-gita as a whole, ending with a few lines about his translation and commentary.

As Rosen himself writes, his edition is not meant to be a literal translation. Since Rosen is not a Sanskritist, that would probably not have been possible, but most of all, such a translation would not have accomplished his purpose: to bring out the essential devotional meaning of the Uddhava-gita by paraphrasing the text according to the understanding of the Gaudiya Vaishnava teachers. In practical terms, this means that the verses of the original text have been rendered into separate pieces of easy English prose in the style of Srila Prabhupada. In terms of layout, the translations are indented and printed in bold. This is graphically not a very attractive solution, especially in the cases where there is little commentary.

I should have wished for a little more stringency in the translations. Sometimes for example the term bhakti is left untranslated, sometimes it is translated as “spiritual devotion” and at other times as “devotional service”.  Phrases such as “make no mistake” and “this is the point” or terms such as “spiritual seekers” may make for easy reading, but at least to my ears, they sound rather too modern in an ancient text. But in general, the translation is very clear and readable, and since that is Rosen’s explicit goal, he must be said to have succeeded well.

However, I do have one other gripe with the language: while the book downplays or even hides the connection between the author and Iskcon—Srila Prabhupada and even some present Iskcon gurus are mentioned several times but never the movement itself—the language is to a large extent the same old Iskcon lingo. Since Steven Rosen in no way is an insulated temple devotee, it is both surprising and disappointing to see him use words such as sun planet, pastimes, or deity worship when trying to reach a general, spiritually interested audience.

While much of the commentary simply elucidates difficult concepts in the text itself (such as some of the details of Varnashram society), one consistent thrust is aimed at refuting a non-dualist understanding of the Uddhava-gita. Considering that the best-known translation available of this text (by Swami Ambikananda Saraswati) is heavily slanted in this “mayavadi” direction, this decision is both understandable and corrective, but I think a more nuanced understanding could have been possible. Rosen himself hints at this when he speaks of the “advaitic theism” of the Bhagavata Purana (p. 7), borrowing Daniel Sheridan’s apposite phrase. Another general theme is comparisons with the Bhagavad-gita and, to a smaller extent, Patañjali’s Yoga Sutra, which is often quite useful. From time to time, Rosen also engages in interreligious comparisons (e.g., 7, 28, 268), but the limited amount of space at his disposal perhaps restrained him here.

This limitation of space also limits the usefulness of the commentary. I would especially have liked to see more of what I feel Rosen does best: presenting ancient teachings in a way relevant for people of today. There are attempts at this here and there, particularly in the last chapter (on bhakti-yoga), but Rosen must have felt restrained by the format of the book. It seems to me that he would have come into his own if another devotee (e.g. Graham Schweig) had done a straight translation and he could have written a separate book on the Uddhava-gita instead.

In closing, it should be noted that whatever negative critique I have offered above has been stated with much reluctance. It is doubtful whether any other living Gaudiya Vaishnava has done more to bring Srila Prabhupada’s teachings into new circles: popular, spiritual and academic. In doing this, Rosen has several times had to take stern criticism from more fundamentalist quarters of Iskcon, but he has not let it change his agenda.  I have personally benefitted greatly from both his books and his journal, in the latter case both as a reader and contributor. If Steven Rosen would permit it, though I doubt he would, I would hold his feet on my head. This book is an important addition to the library of any spiritual seeker. The Uddhava-gita deserves many more readers, and will surely find many of them through Rosen’s new edition.

13 Responses to Review: Krishna’s Other Song