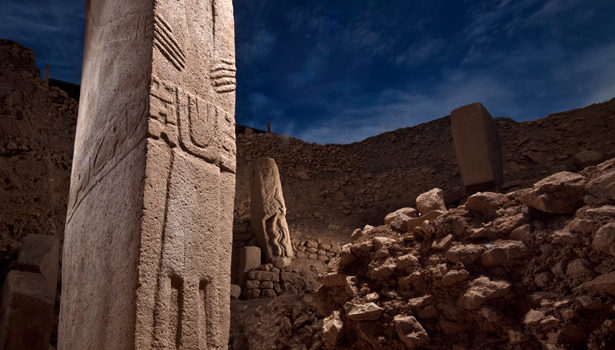 Did the Drive to Worship Give Rise to Civilization? 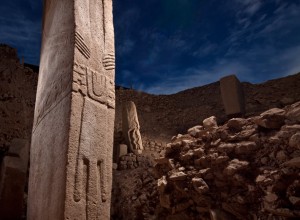 [In southern Turkey,] buses (white, air-conditioned, equipped with televisions) blunder over the winding, indifferently paved road to the ridge and dock like dreadnoughts before a stone portal. Visitors flood out, fumbling with water bottles and MP3 players. Guides call out instructions and explanations. Paying no attention, the visitors straggle up the hill. When they reach the top, their mouths flop open with amazement, making a line of perfect cartoon O’s.

Before them are dozens of massive stone pillars arranged into a set of rings, one mashed up against the next. Known as Göbekli Tepe (pronounced Guh-behk-LEE TEH-peh), the site is vaguely reminiscent of Stonehenge, except that Göbekli Tepe was built much earlier and is made not from roughly hewn blocks but from cleanly carved limestone pillars splashed with bas-reliefs of animals—a cavalcade of gazelles, snakes, foxes, scorpions, and ferocious wild boars. The assemblage was built some 11,600 years ago, seven millennia before the Great Pyramid of Giza. It contains the oldest known temple. Indeed, Göbekli Tepe is the oldest known example of monumental architecture—the first structure human beings put together that was bigger and more complicated than a hut. When these pillars were erected, so far as we know, nothing of comparable scale existed in the world.

At the time of Göbekli Tepe’s construction much of the human race lived in small nomadic bands that survived by foraging for plants and hunting wild animals. Construction of the site would have required more people coming together in one place than had likely occurred before. Amazingly, the temple’s builders were able to cut, shape, and transport 16-ton stones hundreds of feet despite having no wheels or beasts of burden. The pilgrims who came to Göbekli Tepe lived in a world without writing, metal, or pottery; to those approaching the temple from below, its pillars must have loomed overhead like rigid giants, the animals on the stones shivering in the firelight—emissaries from a spiritual world that the human mind may have only begun to envision.

Archaeologists are still excavating Göbekli Tepe and debating its meaning. What they do know is that the site is the most significant in a volley of unexpected findings that have overturned earlier ideas about our species’ deep past. Just 20 years ago most researchers believed they knew the time, place, and rough sequence of the Neolithic Revolution—the critical transition that resulted in the birth of agriculture, taking Homo sapiens from scattered groups of hunter-gatherers to farming villages and from there to technologically sophisticated societies with great temples and towers and kings and priests who directed the labor of their subjects and recorded their feats in written form. But in recent years multiple new discoveries, Göbekli Tepe preeminent among them, have begun forcing archaeologists to reconsider.

At first the Neolithic Revolution was viewed as a single event—a sudden flash of genius—that occurred in a single location, Mesopotamia, between the Tigris and Euphrates Rivers in what is now southern Iraq, then spread to India, Europe, and beyond. Most archaeologists believed this sudden blossoming of civilization was driven largely by environmental changes: a gradual warming as the Ice Age ended that allowed some people to begin cultivating plants and herding animals in abundance. The new research suggests that the “revolution” was actually carried out by many hands across a huge area and over thousands of years. And it may have been driven not by the environment but by something else entirely.

After a moment of stunned quiet, tourists at the site busily snap pictures with cameras and cell phones. Eleven millennia ago nobody had digital imaging equipment, of course. Yet things have changed less than one might think. Most of the world’s great religious centers, past and present, have been destinations for pilgrimages—think of the Vatican, Mecca, Jerusalem, Bodh Gaya (where Buddha was enlightened), or Cahokia (the enormous Native American complex near St. Louis). They are monuments for spiritual travelers, who often came great distances, to gawk at and be stirred by. Göbekli Tepe may be the first of all of them, the beginning of a pattern. What it suggests, at least to the archaeologists working there, is that the human sense of the sacred—and the human love of a good spectacle—may have given rise to civilization itself.

5 Responses to Did the Drive to Worship Give Rise to Civilization?