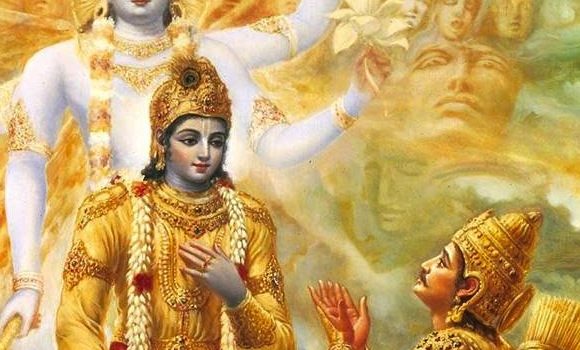 Georges Bataille and the Devouring Economy of Nature 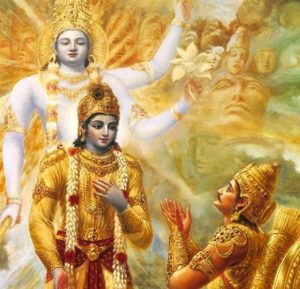 No doubt most readers of The Harmonist are familiar with Bhagavad Gita, the famous and sublime conversation between the ancient warrior Arjuna and his charioteer Krishna. We learn through the unfolding dialog of the Gita that Krishna is the human manifestation of the Supreme God and the true friend of all beings. Krishna is the beneficiary of every kind of love that reveals the best in each of us. It is all the more striking then when Arjuna, while talking to God in the person of his intimate friend and overcome in a rapture of mystical vision (BG 11.24-31), unsettlingly describes him thus:

Having seen your mouths made frightening by many teeth and glowing like the fire of universal destruction, I have lost my sense of direction and find no comfort. . . . All the worlds rush into your mouths, just like moths swiftly entering a blazing fire to be destroyed.1

In response to Arjuna’s dismay, Krishna speaks the famous line quoted in shock and awe by physicist J. Robert Oppenheimer upon witnessing the fulfillment of his scientific work and invention, the first atomic bomb:

I am time, powerful destroyer of the world, who has come forth to annihilate everyone.2

While we usually take the apocalyptic image of flaming mouths to represent the principle of time, which spares no one, I’d like to suggest something more; that is, that the universe itself is all-consuming, that it spends itself. Further, that we humans are inextricably involved in this consumption and that without participating in it through ways of sacrifice, that is, through conscious consumption such as that described in Bhagavad Gita, we cannot avoid rushing into the mouths of unnecessary horror and waste of which Oppenheimer’s invention is one manifestation.

Parallel to the Gita in some ways are the ideas of a modern French writer named Georges Bataille (1897-1962), whose views are not only interesting but offer insight into the current predicament of the West and are charged with urgency in confronting the crisis of Modernity.

Bataille’s metaphysical conception is a kind of mystical materialism. For him, “matter” is the substratum of the universe; but it is a notion like the materia prima of Western mysticism or the Indian concept of prakrti: dynamic and ineffable nature. Unlike the scientific concept of matter, his matter can be intuited but not empirically quantified or rationally explained. It is infinite, infinitely abundant, and ever-expanding. The sun, he thinks, the center of our immediate universe, is the central metaphor for his idea of matter, the center of its “economy.” The sun is both the source of energy and also pure consumption; a blazing mass, it devours itself and hurls its energy in all directions, sustaining life everywhere.

Taking on endless forms, life, like the solar energy (or as the solar energy as Bataille might put it) fills every recess of space: every region, every geographical condition, the land and sea, even to the bacteria in our guts. As it expands in space, it also extends through time, for nature is continually killing off all living beings to make room for new ones. In a sense, death is part of the generous expenditure of nature. It is an overflow of nature. As living beings, we are both spenders and the spent. We are spenders only as long as we can absorb energy for our own growth, and after which, we are literally spent. It is awareness of the tension between the finite individual and infinite nature that constitutes the problem of the human. Bataille says:

I will begin with a basic fact: The living organism, in a situation determined by the play of energy on the surface of the globe, ordinarily receives more energy than is necessary for maintaining life; the excess energy  (wealth) can be used for the growth of a system (e.g. an organism); if the system can no longer grow, or if the excess cannot be completely absorbed in its growth, it must necessarily be lost without profit; it must be spent, willingly or not, gloriously or catastrophically.3

Bataille calls this excess “the accursed share,” for as suggested above, it is potentially problematic. According to Bataille, a society must find a way of draining off energy in excess of what it needs or risk being destabilized and destroyed by that very wealth. It may seem counterintuitive in our age of impending scarcity with predictions of economic collapse and dwindling resources how we could have “too much energy,” but our resource problems are ironically a result of our civilization’s strategy of dealing with its wealth.

Bataille’s book The Accursed Share details how various human societies spend energy, whether through elaborate gifting ceremonies, warrior culture, monasticism, or capitalist industry. Basic features of human collectivity including religion, art, war, and time spent doing nothing, but also celebrations, pageantry, spectacle, entertainment, sports, dancing and music, eroticism (vs. procreative sex), and many others including even human sacrifice and prolonged mourning all constitute a “useless” expenditure of wealth. Human endeavor falls into two classes: the productive, which is concerned with growth and maintaining the lives of individuals, and the consumptive, which dissipates the energy beyond what can be “used.” We are impelled, even against reason, to engage in “consumptive” activity not just because it’s fun but because it is one with the essential nature of existence of which we are inseparable.

Interestingly, Bataille shows how Modernity, the core value of which he takes to be capitalism (with it’s alienating individualism), is entirely rooted in productive values and language against pre-modern times and cultures, which were attentive to the values of consumption. Prior to Modernity, in later medieval times, the increase in European wealth was applied to religious culture: cathedral building, monasteries, pilgrimages, crusades, numerous holy days (time spent feasting and not working), and in general, time spent (again, not working) in acts of personal piety, attending daily mass and the like. After the Reformation, and especially after Calvin, the idea that religious observances would bring spiritual merit in the eyes of God lost traction for many Europeans, for as Luther preached, Salvation is obtained by grace alone and never by pious works. The reformers also preached that simple work was noble and that worldly prosperity could be taken as a sign that one was blessed by God, an indication in the predestined scheme of life that one was “elect” or chosen by God to be saved.4

Thus begins what later came to be called by German sociologist Max Weber, the Protestant Work Ethic, one of several motivating ideologies behind the rise of capitalism.5 Building on Weber’s theories, Bataille suggests that the Protestant reformers had unknowingly shifted the means of wealth expenditure from religious culture (and also games, singing and dancing, gambling, and eroticism, which leaders like Calvin sought to suppress with totalitarian zeal) into the means of production itself: more industry, business, restraint, frugality, fiscal discipline. Since then, Western civilization has been obsessed with the ever-increasing expansion of commerce, industry, and the control of nature to ensure the survival of the individual.

Equally notable is the explosion of violence that the Reformation unleashed (much to the shocked horror of the early reformers), costing the lives of millions in over a century of religiously justified warfare and persecutions. Even beyond the 17th century we must note the untold misery and death later inflicted by Europeans through colonization, slavery, and genocide throughout the world to support the West’s productive values.

We begin as spenders and end being spent. But as Bataille demonstrates, there are many ways to engage in the sacrificial economy of nature. Knowing this, we are left with a choice between conscious sacrifice and blind waste as monstrous as the atomic bomb. He says:

We can ignore or forget the fact that the ground we live on is little other than a field of multiple destructions. Our ignorance has only this incontestable effect: It causes us to undergo what we could bring about in our own way, if we understood.6

We must seek out pure acts of expenditure that have no benefit to our immediate survival, which undermine our sense of individuality, which go against pragmatically oriented reason; we must learn to give freely and understand actual sacrifice in the midst of life or have it imposed on us as we rush past teeth of fear into the flaming mouth of destruction. We are already impelled to do so as this is what connects us to the nature of life itself. On this topic the Gita has much to say. In fact, Bhagavad Gita can be read as a solution to Bataille’s problem of the accursed share, and moreover one that takes us well beyond his concept of mystical materialism to an intimate knowledge of the enjoyer of all sacrifice himself, as our own friend.

8 Responses to Georges Bataille and the Devouring Economy of Nature