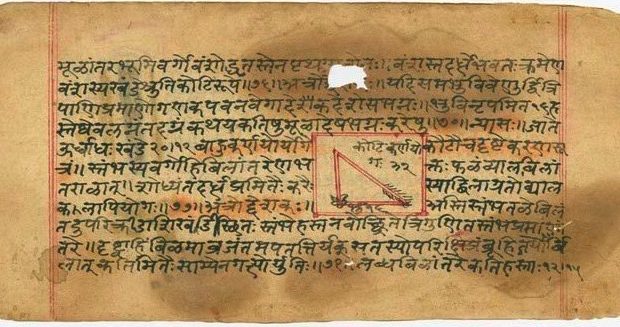 A page from a manuscript of Lilavati showing the Pythagorean Theorem

Did you know that Vedic priests were using the socalled Pythagorean theorem to construct their fire altars in 800 BCE?; that the differential equation for the sine function, in finite difference form, was described by Indian mathematician-astronomers in the fifth century CE?; and that “Gregory’s” series π/4 = 1−1/3 +1/5 −· · · was proven using the power series for arctangent and, with ingenious summation methods, used to accurately compute π in southwest India in the fourteenth century? If any of this surprises you, Plofker’s book is for you.

Her book fills a huge gap: a detailed, eminently readable, scholarly survey of the full scope of Indian1 mathematics and astronomy (the two were inseparable in India) from their Vedic beginnings to roughly 1800. There is only one other survey, Datta and Singh’s 1938 History of Hindu Mathematics, recently reprinted but very hard to obtain in the West (I found a copy in a small specialized bookstore in Chennai). They describe in some detail the Indian work in arithmetic and algebra and, supplemented by the equally hard to find Geometry in Ancient and Medieval India by Sarasvati Amma (1979), one can get an overview of most topics.2 But the drawback for Westerners is that neither gives much historical context or explains the importance of astronomy as a driving force for mathematical research in India. While Western scholars have been studying traditional Indian mathematics since the late eighteenth century and Indian scholars have been working hard to assemble and republish surviving Sanskrit manuscripts, a widespread appreciation of the greatest achievements and the unique characteristics of the Indian approach to mathematics has been lacking in the West. Standard surveys of the history of mathematics hardly scratch the surface in telling this story.3 Today, there is a resurgence of activity in this area both in India and the West. The prosperity and success of India has created support for a new generation of Sanskrit scholars to dig deeper into the huge literature still hidden in Indian libraries. Meanwhile the shift in the West toward a multicultural perspective has allowed us Westerners to shake off old biases and look more clearly at other traditions. This book will go a long way to opening the eyes of all mathematicians and historians of mathematics to the rich legacy of mathematics to which India gave birth.

The first episode in the story of Indian mathematics is that of the Sulba-sutras, “The rules of the cord”, described in section 2.2 of Plofker’s book.4 These are part of the “limbs of the Vedas”, secular compositions5 that were orally transmitted, like the sacred verses of the Vedas themselves. The earliest, composed by Baudh¯ayana, is thought to date from roughly 800 BCE. On the one hand, this work describes rules for laying out with cords the sacrificial fire altars of the Vedas. On the other hand, it is a primer on plane geometry, with many of the same constructions and assertions as those found in the first two books of Euclid. In particular, as I mentioned above, one finds here the earliest explicit statement of “Pythagorean” theorem (so it might arguably be called Baudh¯ayana’s theorem). It is completely clear that this result was known to the Babylonians circa 1800 BCE, but they did not state it as such—like all theirmathematical results, it is only recorded in examples and in problems using it. And, to be sure, there are no justifications for it in the Sulba-sutras either—these sutras are just lists of rules. But Pythagorean theorem was very important because an altar often had to have a specific area, e.g., two or three times that of another. There is much more in these sutras: for example, Euclidean style “geometric algebra”, very good approximations to p2, and reasonable approximations to π.

Another major root of Indian mathematics is the work of Panini and Pingala (perhaps in the fifth century BCE and the third century BCE respectively), described in section 3.3 of Plofker’s book Though Panini is usually described as the great grammarian of Sanskrit, codifying the rules of the language that was then being written down for the first time, his ideas have a much wider significance than that. Amazingly, he introduced abstract symbols to denote various subsets of letters and words that would be treated in some common way in some rules; and he produced rewrite rules that were to be applied recursively in a precise order.6  One could say without exaggeration that he anticipated the basic ideas of modern computer science. One wishes Plofker had described Panini’s ideas at more length. As far as I know, there is no exposition of his grammar that would make it accessible to the non-linguist/Sanskrit scholar. P. P. Divakaran has traced the continuing influence of the idea of recursion on Indian mathematics,7 leading to the thesis that this is one of the major distinctive features of Indian mathematics.

Pingala, who came a few centuries later, analyzed the prosody of Sanskrit verses. To do so, he introduced what is essentially binary notation for numbers, along with Pascal’s triangle (the binomial coefficients). His work started a long line of research on counting patterns, including many of the fundamental ideas of combinatorics (e.g., the “Fibonacci” sequence appears sometime in 500-800 CE in the work of Virahanka). There is an interesting treatment of this early period of Indian mathematics in Frits Staal’s excellent recent book Discovering the Vedas,8 ch.14. For example, Staal traces recursion back to the elaborate and precise structure of Vedic rituals. After this period, unfortunately, one encounters a gap, and very little survives to show what mathematicianswere thinking about formore than 500 years. This was the period of Alexander’s invasion, the Indo-Greek Empire that existed side by side with the Mauryan dynasty including Asoka’s reign, and the Indo-Scythian and Kushan empires that followed. It was a period of extensive trade between India and the West, India and China. Was there an exchange of mathematical ideas too? No one knows, and this has become a rather political point. Plofker, I believe, does a really good job discussing the contentious issues, stating in section 4.6 the “consensus” view but also the other points of view. She states carefully the arguments on both sides and lets the reader take away what he or she will. She deals similarly with the early influences from the Middle East in section 2.5 and of the exchanges with the Islamic world in Chapter 8. For my part, I follow my late colleague David Pingree,whotrainedawhole generationof scholars in ancient mathematics and astronomy. He argues that the early version of Greek astronomy, due to Hipparchus, reached India along with Greek astrology. The early Indian division of the ecliptic into twenty-eight Naksatras, (the moon slept with a different wife every night in each trip around the ecliptic)was replaced by theGreek zodiac of twelve solar constellations and—more to the point—an analysis of solar, lunar, and planetary motion based on epicycles appears full-blown in the great treatise, the Aryabhatiya of Aryabhata, written in 499 CE. But also many things in the Indian treatment are totally different from the Greek version. Their treatment of spherical trigonometry is based on three-dimensional projections, using right triangles inside the sphere,9 an approach which I find much simpler and more natural than Ptolemy’s use of Menelaus’s theorem. Above all, as mentioned above, they found the finite difference equation satisfied by samples sin(n..θ) of sine (see Plofker, section 4.3.3). This seems to have set the future development of mathematics and astronomy in India on a path totally distinct from anything in the West (or in China).