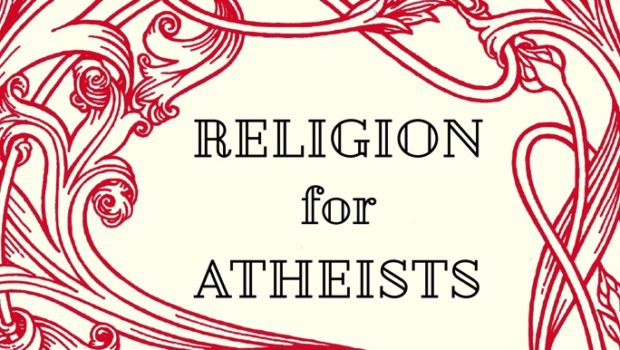 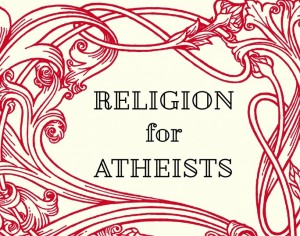 Alain de Botton, Religion for Atheists: A Non-believer’s Guide to the Uses of Religion. Pantheon: 2012.

Both friends and foes of the Church of England might think that the title of this book, Religion for Atheists, is one we’ve already claimed. We set a low hurdle, it is said, which many sceptics clear with ease, and once over they seem to find the tentativeness of our enthusiasms, the Gwen John palette of our prayer, if not exactly congenial, then not unpleasant.Alain de Botton might belong to this group, were it not for this, in the first chapter: “Let us state that of course no religions are true in any God-given sense.” That he should reach his conclusion so confidently and so early on would, you’d think, spare him the effort of engaging seriously with religion and spare us the effort of reading the rest of the book. He does persevere, however, and so should we, for our efforts are rewarded. His prose is lovely: clear, gently persuasive, light of touch – he would have made a marvellous preacher – and the text is illustrated with helpful photographs suggesting, to paraphrase Emily Dickinson, that the truth is best told slant.

It is a great relief, also, to come across a book with the word “atheists” in the title that responds to the claims of religion and its adherents with something more than an attack of the vapours. Others, more hostile in intent, leave their readers with the impression that affiliation to a church is equivalent to, say, participating actively in the Spanish Inquisition. De Botton, in welcome contrast, concedes that religion might not only be benign but also offer things of value for all. In my little town, for example, if you are old and alone, church and chapel between them provide daily amusements, solidarity with one’s peers, contact with the young, practical support and help and a fathomless wealth of biscuits. Seven centuries ago, in this unremarkable part of the English Midlands, the town folk built a church so beautiful that it gave shape to their hopes of a life transcending this worldly weal and woe – a function that it continues to perform today.

De Botton suggests that these modest examples are derived from religious faith and commitment, powerful stuff, which on a wider scale have enabled liberal education to flourish, societies to cohere, and individuals to engage with one another in peculiarly rich and successful ways. He rather interestingly contrasts going out to eat in a restaurant with the Eucharist. The former gathers people in a convivial setting to eat together only for them to pretend that they are in fact alone, sitting there in isolating pools of light whispering to one another over their sea bass. The latter, originally a shared meal, turns strangers into brothers and sisters through the practice of what theologians call koinonia – communion through participation. This is not to say that De Botton is unmindful of the yawning chasm between what religious people hope to do and what they actually achieve, but he does think that there is credit in having a go.

For these, and other reasons, De Botton urges his readers not to ignore or scorn religion but to steal from it. We may no longer feel the need to profess extraordinary beliefs and circumcise our boy children but we could all use a revived sense of community, an enlivening of our sympathies, and a strengthening of our powers to enjoy or endure existence. He recommends, for example, the erection of temples to secular virtues, structures – like mosques or Stonehenge or St Mary the Virgin, Finedon – in which our values and aspirations are “solidified and celebrated”. That makes sense, and some illustrations are provided; but to me – and here is where we part company – they look like pavilions from a minor Baltic expo. Could a Temple of Reflection or Campanile of Perspective or Henge of Higgs Bosons ever do for us what Lincoln Cathedral or the Al-Azhar mosque did for our ancestors? I do not think so, because they do not have the same designs on us, body and soul. In these secular temples our deepest longings and fears may indeed be “mirrored and contextualised” but they are not redeemed.

I think I share a secular person’s sense of awe and wonder at a starlit sky or a subatomic particle behaving ambiguously; I too find deep consolation in the sublime indifference of nature – the one thing that makes me feel nostalgic for atheism – but Christianity does not offer consolation, it offers salvation. That is why people built cathedrals, and in other dispensations enormous mosques and complexes of temples: they sought, and seek, salvation, and for this God‑givenness seems to me essential.

This article originally appeared on The Observer.

3 Responses to Review: Religion for Atheists