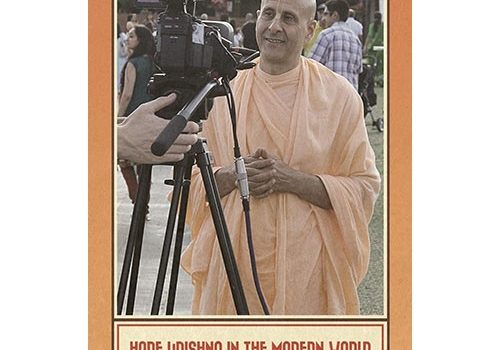 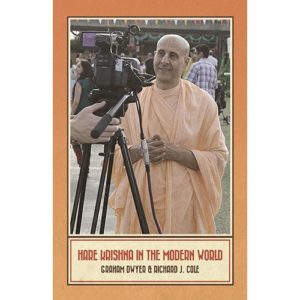 ISKCON has a long history of interaction with academics. The first in-depth study of the movement, J. Stillson Judah’s Hare Krishna and the Counterculture (1974) was much appreciated by Srila Prabhupada himself, and when ISKCON became embroiled in the cult-controversy in the mid-seventies, one source of legitimization as a “bona fide” religion rather than as a “cult” was sought by deliberately cultivating the scholarly community.

The first major fruit of this work was Steven Gelberg’s Hare Krishna, Hare Krishna: Five Distinguished Scholars on the Krishna Movement in the West (1983), featuring interviews with A.L. Basham, Harvey Cox, Shrivatsa Goswami, Thomas J. Hopkins and Larry Shinn, but it is an effort that has continued. In 1992, Steven Rosen (Satyaraja Dasa) published Vaisnavism: Contemporary Scholars Discuss the Gaudiya Tradition, featuring a much larger cast than Gelberg’s book, and this time including scholars from within ISKCON as well.

The authors of the present text, Graham Dwyer and Richard J. Cole, published in 2007 The Hare Krishna Movement: Forty Years of Chant and Change, drawing together essays by several scholarly ISKCON devotees and two outsiders, Thomas J. Hopkins and Anna King. While not being an ISKCON publication with an explicit religious agenda, it is not unreasonable to place it together with Gelberg’s and Rosen’s work above. With the present book, the editors add another and updated chapter to the tale, this time returning to the interview format followed by the previous texts.

The main part of the book—the interviews—is prefaced by a brief introductory essay by E. Burke Rochford, called Sociological Reflections on the History and Development on the Hare Krishna Movement. The essay focuses on the “Hinduisation of ISKCON”, a topic that will be familiar for those familiar with the previous work of this scholar. Many of the interviews refer back to this essay and sometimes criticize it. I agree with the comments of Dr. Edith Best, when she points out that the development of ISKCON in the United States is not in every case indicative of the movement’s development elsewhere (“America is not the world”). Unfortunately, Burke Rochford’s USA-centered approach to ISKCON is somewhat mirrored by the book is a whole: all of the persons featured are either from the USA or from Great Britain.

The book contains seven interviews. Three are with well-established outside scholars, Dr. Anna S. King from the University of Winchester, Professor Julius Lipner from the University of Cambridge and Professor Kim Knott from the University of Leeds. All of these scholars reminiscence about their studies of and engagement with the movement in a sympathetic way, viewing its prospects with optimism. Sometimes they offer words of advice—Kim Knott for example would like to put children and transmission on the agenda—but it is only Anna S. King that really gives voice to criticism. Given her very sympathetic view of the movement, I feel that ISKCON devotees should take her seriously here. The first criticism is in regards to the way in which many if not most devotees within ISKCON view science. It is difficult not to agree with her here: the campaigns against evolution or, even more bizarrely, against a heliocentric view of the solar system, are not only a huge waste of resources, but are not likely to attract many people to the movement—even were they miraculously to succeed. I mean, if Darwin was wrong, why would the next step be to shave up and move into a Hare Krishna temple?

Anna King’s second criticism concerns the nostalgia for varnashrama dharma within the movement. Having worked with dalits in India for many years, she can clearly see how such a project is not only totally unrealistic; it would also contribute to violence and oppression.

Four scholarly ISKCON devotees are interviewed. Kenneth Valpey (Krishna Kshetra Dasa) brings up the need for ISKCON-friendly but independent think-tanks, such as the ISKCON Studies Institute, and also voices the idea that the mission of ISKCON as an institution really is to foster the development of sadhus, non-political people interested in their own spiritual life and in disseminating that to others.

Steven J. Rosen (Satyaraja Dasa) talks at some length about his work with Journal of Vaishnava Studies, and how interacting with the scholarly community has strengthened his faith in the “basic” or “fundamental” truths of Gaudiya Vaishnavism, calling issues such as whether there really was a Rama in Treta Yuga “almost irrelevant” in this regard—and thus firmly placing himself in the camp of “flaming liberals.” Rosen also comments at length on the conflict between ISKCON and Srila BV Narayana Maharaj, an issue very much topical at the time of the interviews. Unlike other ISKCON devotees in the book (and outside), Rosen shows sympathy and understanding for Narayan Maharaj’s point of view. Such a view is easy to take now that Narayan Maharaj has departed this world, but at the time of the interview it was a strong, even courageous statement.

Joshua M. Green (Yogesvara Dasa) speaks about bringing the teachings of Gaudiya Vaishnavism into the wider world, but also raises a painful fact: ISKCON in North America has gone from being ridiculed and being feared to today being utterly irrelevant.

Edith Best (Urmila Devi Dasi) comes last, but then again, she also has the most to say in terms of substance. She links the influx of Hindus in, as she carefully points out, selected parts of ISKCON with the conservation of social capital, using Pierre Bourdieu’s term, and has a lot to say about training and engaging the next generation of devotees. As she says, “We have not understood the value of our children.” She is also the only one of the interviewees offering something of a global perspective, as well as a very important female insider voice, often modifying or even contradicting the rather unrealistic views on the relationship between the genders in ISKCON today voiced by outsiders or male insiders.

The book ends with a short final remark by another devotee scholar, Michael J. Gressett, summing up some of what has been said before and discussing the legacy of Shrila Prabhupada.

What does the book teach us about ISKCON, then? While I primarily view this book together with the ISKCON insider material I mentioned at the beginning, I do not intend to say that it lacks scholarly value. Far from it. Since most of the interviewees are influential ISKCON devotees, it offers an important viewpoint into current discussions within the movement. In this sense, it can function as a sourcebook to what is going on within ISKCON in the 2010s.

The book suffers from two major drawbacks—the absence of an Indian and of a conservative voice—but it does illustrate the fact that ISKCON of today is no monolith. It is an organization vibrant with activity and energy in some parts of the world but moribund in others, it is in some cases despairingly insular and bigoted but in others welcoming and open. For despite the lofty goals of both its founder and present leaders, ISKCON is a movement of human beings, and it is perhaps here that both its perdition and salvation lies.

19 Responses to Review: Hare Krishna in the Modern World