I Am Not Alone 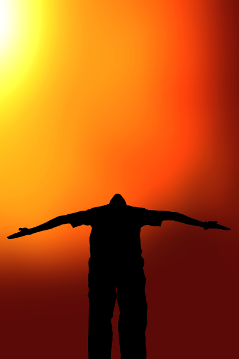 We think “I am Finnish,” I am American,” I am male,” “I am female,” and so on. However, whether it be “I am this” or “I am that,” such identifications with the objective world are at best fleeting—here today and gone tomorrow. All that I really know is that “I am.” And in an enduring sense that corresponds with the I that no one can escape, nothing from the objective world comes close to defining the subjective “I.”

The objective world of matter only matters because of our subjective “I.” Any attempt to define this “I” in objective terms amounts to that which is inherently meaningful attempting to make itself meaningless. “What am I” is a question that seeks meaning, and meaning derives only from the subjective world. Our “I” gives meaning to all things and it itself is nothing like the things it measures. Hence our “I” is a unit of meaning, an instrument of measurement. And that which measures is itself immeasurable. We define things by way of comparing them to other things. And there is no “thing” comparable to “I.” Fortunately the best things in life are not things.

In the Bhagavad-gita it is said that “Some look on the “I” as amazing, some describe “I” as amazing, and some hear of “I” as amazing, while others, even after hearing about “I,” cannot understand “I” at all.” To say “I am amazing” is accurate, as much one has not conflated the enduring, subjective “I” with the passing, objective things of the world the “I” examines.

But is “I” not merely a collection of subjective experiences? No, the “I” is the experiencer of these experiences. The “I” is more like Schrodinger’s canvas upon which a collection of data is collected than it is any single piece of or collection of data. It is akin to the subjective existence in which subjective experiences appear. In Berkeley’s mind it is the distinction between any one of one’s ideas and that which is entirely distinct from them and in which they are contained. Of course such analogies do not define our “I” but rather seek to explain its indefinable nature. Indeed, “I” is impossible to define other than in terms that are unintelligible without knowing what “I” means.

How can the “I” know itself? As little as we do know about it, it is at the same time the only thing we know. Bertrand Russell concluded in his analysis of matter that in the end the only thing we know is our own consciousness, our “I.” And I would add that the “I” itself is unknowable, at least in the way in which we think we know anything else. It is that which enables the power of reasoning that reason itself can not know in its entirety, if by reason we really know anything at all. But if we are to apply reasoning to this subject, as we must, we are left with the conclusion that the “I’s” experience of the objective world is that it is distinct from it, and arguably from its limitations of time and space. The “I” is a manifestation of an enduring, knowing, and feeling existence quite distinct from matter, in as much as matter in all of its manifestations is non enduring, unknowing, and without feeling.

The “I” vaguely experiences itself and serves as the seat of all experience. That vague experience can be honed through a trans-rational methodology. Such is what we refer to when we speak of sadhana. And when we speak of sadhana-bhakti, we speak not only about subjective “I’” being different from objective matter, but also of its potential to love, and thus of “Another.” In bhakti we meet the “I” and find that fortunately, “I am not alone.”

One Response to I Am Not Alone