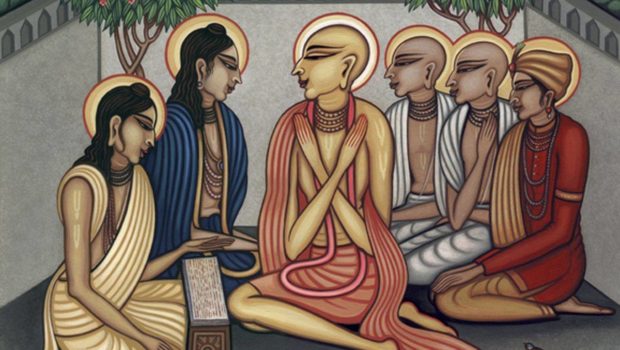 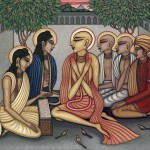 Srila Bhaktisiddhanta Saraswati Thakura wrote, “The idea of an organized church in an intelligible form marks the close of a living spiritual movement. The great ecclesiastical establishments are the dikes and the dams to retain the current that cannot be held by any such contrivances. They, indeed, indicate a desire on the part of the masses to exploit a spiritual movement for their own purpose. They also unmistakably indicate the end of the absolute and unconventional guidance of the bona fide spiritual teacher.” (The Harmonist, January 1929)

Q. I read in an Iskcon publication that there are four disciplic successions and the leaders of these successions are known as adi-gurus, or original gurus. The duty of each member and all subsequent gurus in the sampradaya is to simply transmit the message as received from the adi-guru without adulteration. Is this correct?

A. The Padma Purana says that there are four Vaisnava sampradayas. In relation to this statement our sampradaya would be the Brahma sampradaya and our adi-guru would be Brahmaji. He passed the teachings through Narada to Vyasadeva, who compiled the Vedas. When the teachings came to Madhvacarya, he did not simply repeat what he had heard from others, rather he shed new light on the Vedas by interpreting them according to his own spiritual realization. His interpretation, known as dvaitavada, gave birth to a new spiritual movement, in which prominent members further elaborated on the philosophy of Madhva, as the tradition developed its own rites, rituals, and spiritual practices.

Later in the Brahma-Madhva sampradaya, Sri Caitanyadeva, in accordance with his own spiritual experience, shed new light on the teachings that Brahma received from Krishna. His disciples, the Six Goswamis of Vrindavana, further elaborated on the teachings of Sri Caitanya. In this way the Caitanya branch of the Madhva sampradaya came into being and developed its own rites, rituals, and spiritual practices. It is the religion of Sri Caitanya that Srila Prabhupada came west to establish. He did not come to establish a new sampradaya or religion. He came to promote the Brahma-Madhva-Gaudiya sampradaya, which he did by innovative preaching, not by simply parroting what he had heard from his guru.

The point here is that while it is true that the teachings should be passed on without adulteration, the real spirit of the parampara involves shedding new light on the teachings, making them relevant to people of the times. While Srila Prabhupada would often say to pass on what you have heard without adulteration, his own example of adjusting the teachings according to time and circumstance clearly demonstrates that preaching involves understanding the teachings enough to deliver the essential message, in the midst of altering many nonessential details. Disciplic succession is not simply about repeating what you have heard from the previous guru. It is about realization.

Q. I read that the adi-guru is the devotee who founds the disciplic succession and establishes its original teachings, and that “founder acarya” refers to the devotee who redirects the parampara and corrects the teachings when they become lost or altered. In this regard some consider Srila Prabhupada’s contribution to be like that of Madhva and Ramanuja, who are founder acaryas. Some consider them adi-gurus as well, so I guess Srila Prabhupada could also be both an adi-guru and a founder acarya. The book I read says further that Bhaktivinoda Thakura explains that devotees who succeed the founder acarya are duty bound to see the teachings of the parampara through the founder acarya’s instructions. There was however no reference from the writings of Bhaktivinode Thakura given to support these statements. Did Bhaktivinoda Thakura actually say all this?

Srila Prabhupada himself never explained the terms adi-guru and founder acarya in the way that you have done. So from the start we are left to accept the explanation of these terms with no supporting evidence. Indeed, there is evidence to the contrary.

Srila Prabhupada writes, “If we are to accept guru, so the original guru is Krishna because He instructed Lord Brahma, the first living creature within this universe. Tene brahma hrda ya adi-kavaye [SB 1.1.1]. He instructed the adi-kavi (Brahma, the original poet from whom the Vedic scriptures emanate). He is the guru, Krsna. And in the Bhagavad-gita, he also says, imam vivasvate yogam proktavan aham avyayam [Bg. 4.1]. So He (Krsna) is adi guru. In Bhagavad-gita also he is instructing Arjuna. He is adi guru.”

Bhaktivinoda Thakura writes, “The adi-guru of all the spiritual masters in the disciplic succession is Bhagavan, the Supreme Personality of Godhead. Showing his great mercy, he instructed Brahma, the adi-kavi. These truths were in turn taught by Brahma to Sri Narada, by Narada to Sri Vyasa, and by Vyasa to Sri Madhvacarya. Such instructions as received through this disciplic succession are called guru-parampara-upadesa.”

Q. I am trying to understand the role of the siksa (instructing) guru in the Gaudiya sampradaya. Some people are under the impression that the Gaudiya sampradaya means Iskcon exclusively and are teaching that members of Iskcon should not receive instruction in Gaudiya Vaisnavism from devotees outside that organization. What is your opinion on this?

A. The International Society for Krsna Consciousness (Iskcon) is the largest international Gaudiya Vaisnava organization. Some members of that organization may believe that Iskcon alone, at the exclusion of other similar Gaudiya sects, represents the Gaudiya Vaisnava sampradaya. In my limited experience, even when they know otherwise in theory, in practice some Iskcon devotees tend to forget this fact, which sometimes leads them to disrespect the rest of the sampradaya. While you may have accurately described Iskcon’s official policy in regards to siksa guru, the truth is that many disciples of Srila Prabhupada have at one time or another accepted advice and spiritual instructions from senior devotees outside that organization.

In spite of their rules to the contrary, I have found that Iskcon members have no difficulty in applying the principle of siksa guru in a way that extends beyond the borders of that society. Many Iskcon devotees subscribe to Sanga and send me relevant questions on Gaudiya Vaisnavism, although I have not been a member of Iskcon for twenty years. Others regularly read the writings of acaryas who are outside of Iskcon or have accepted one or more these acaryas as their siksa guru(s), while remaining within Iskcon for convenience sake or other nobler reasons.

Yet some members of Iskcon are still blinded by the glaring misconceptions that their official siksa guru policy is based on. The official position, stating that disciples of Srila Prabhupada, my beloved diksa guru, cannot accept someone outside of Iskcon as their siksa guru without being considered deviant, is understood by many devotees as not only theologically unacceptable but insulting as well. One result of this ill-conceived policy is that devotees who practice Krishna consciousness outside of Iskcon are ostracized and vilified by Iskcon members, instead of being embraced as fellow Vaisnavas, which is the type of non-sectarianism that Srila Prabhupada had ultimately hoped for.

At any rate, differences of opinion are a fact of spiritual life and it should be clear on this matter that I differ with Iskcon’s official policy. However, differences should only remain if each party can muster sufficient scriptural support to justify their opinion. I have yet to see any actual scriptural support justifying the theory that one can only take siksa from a member of one’s own religious institution. Indeed, if this were an actual scriptural imperative then no member of any other Gaudiya Vaisnava sect or organization could take siksa from anyone in Iskcon.

Q. I read that there are many types of siksa gurus and their role is to give instruction in devotional service, generally known as abhideya. Is it correct to say that a founder acarya is the siksa guru for his or her followers, and the diksa guru initiates disciples giving instructions in devotional science, known as sambandha?

A. There are many types of siksa gurus and of course the founder acarya of an institution is certainly one of them. The founder acarya’s influence on the spiritual life of any particular devotee will depend on many factors, but generally the best siksa guru for a devotee is the one who is helping him or her the most at any particular point in time. While Srila Bhaktisiddhanta, Srila Prabhupada, Srila Sridhara Maharaja, Srila Kesava Maharaja, and so many others are founder acaryas for their respective missions, it is left to those who represent them to make their teachings understandable and accessible to devotees and the general public. This is what these founder acaryas did with regard to the teachings of the acaryas who came before them. Therefore to the individual, a particular representative of the founder acarya may be even more important than the founder acarya of the institution. This is the dynamic principle of disciplic succession.

Otherwise, when it is said that the diksa guru gives sambandha jnana, this really refers to the fact that he or she gives the mantra, wherein knowledge of one’s relationship with Krishna is found. Diksa means giving the mantra. Everything else that follows is siksa. The disciple requires siksa at every stage of progress. There is siksa on sambandha (conceptual orientation), siksa on abhideya (the nature of the path), and siksa on prayojana (the goal). Siksa may come from friends and associates, but the most helpful and meaningful siksa comes from the association of advanced devotees. One should seek out this type of siksa regardless of where it is found. Prohibiting devotees from going beyond institutional boundaries to seek advanced association can sometimes constitute an offense to the principle of guru, of which Krsna is the adi-guru. Krsna cannot be imprisoned within the walls of any particular religious institution and offenses to the principal of guru cannot be counteracted by official institutional policy.

2 Responses to Adi-Guru and Founder Acarya