Review: Realization and Manifestation of Your Eternal Identity 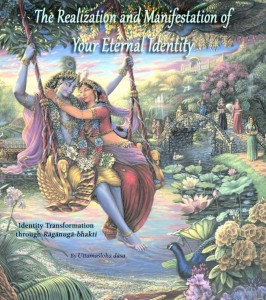 In his Gaura-Govindarcana-smarana-paddhati, Dhyanacandra Goswami presented a systematic internal practice for the cultivation of raganuga-bhakti that over time formed the basis of what became known as siddha-pranali. Siddha-pranali is literally a lineage (pranali) of perfected souls (siddhas), but in more recent times the term has come to be identified with that which is thought to descend through such a lineage: information about and realization of one’s internal spiritual, lila-seva form, one’s siddha-deha. Thakura Bhaktivinoda followed this so-called siddha-pranali system when taking diksa from Bipin Bihari Goswami, even while being a radical reformer of Gaudiya Vaishnavism at a time when siddha-pranali diksa had become corrupted by non-siddhas giving out siddha-dehas. In recognition of this corruption, Sri Bhaktisiddhanta Saraswati chose to take a more conservative approach to raganuga-bhakti. He totally downplayed the extant siddha-pranali system and ekadasa-bhava meditations in favor of the natural awakening of ruci in the context of nama-kirtana and responsible service in an institutional structure. This accounts for the dim view A.C. Bhaktivedanta Swami took of siddha-pranali. And this view was in turn passed along to his disciples. Many of them, unaware of the system’s origins, consider it to be fabricated in the minds of men seeking only to fill their bellies. Uttamasloka dasa seeks to rectify this misunderstanding, among others, in his breakdown and overview of raganuga-bhakti.

Uttamasloka has given his readers what he calls a “study guide” to the corpus of Gaudiya writings dealing with the vast topic of raganuga-bhakti. He covers an impressive amount of ground indeed, dealing with basics like how the material identity arises all the way to the very esoteric asta-kaliya-lila smaranam in one’s siddha-deha. The book is clearly written with an Iskcon audience in mind, as the author seeks to address several misconceptions unique to that society in order to highlight their potential as obstacles for those becoming eligible for raganuga-bhakti. These misconceptions include the “fall of the jiva” (there is none); that studying the books of acaryas other than Prabhupada is detrimental (not only is it not, reading the books of the purvacaryas is essential to truly understanding Prabhupada’s books); and, a personal favorite, that one does not “chant 16 rounds and follow the 4 regs” and somehow magically wake up in Krishna lila after remembering Krishna at the time of death.

In making this information freely available, Uttamasloka seems to be implying that it’s time for the older followers of Srila Prabhupada to start thinking in earnest about where all the book distribution, chanting in the streets, etc., is supposed to lead. I can go with that; after all, a spiritual life consisting of only anartha-nivrtti is really not much of a life at all. Artha-pravrtti has to be there, and to acquire some of the theory underlying a genuinely spiritual life can be helpful indeed in awakening raga. Studying the many books on this topic is clearly something Uttamasloka has done a fair bit of, and it’s only natural to want to share one’s preoccupation. If more people become similarly preoccupied that would be a good thing; at least then perhaps some of the petty bickering we see on the internet might disappear because devotees have better things to do.

Still, there is a part of me that wonders just how relevant this information actually is owing to its highly esoteric nature. Full-on raganuga-bhakti (jata ruci) is a very high and rare thing, which is why the Saraswata sampradaya characteristically is quick to caution those interested in it to not get ahead of themselves: “pujala raga-patha gaurava bhange, the path of raga is worshipable and to be regarded with utmost respect.” In this connection, Srila Sridhara Maharaja used the expression “Fools rush in where angels fear to tread.” While I certainly don’t think Uttamasloka involved in folly, I do believe that caution in such lofty matters is called for. No doubt raganuga-bhakti is the Gaudiya sampradaya‘s specialty, but books like this one can tend to make it all sound a bit easier than it really is, and so I read with an eye toward how exactly the information in it will be put to practical use.

A crucial point I think Uttamasloka could have done more to bring out is that there is a middle position between anartha-nivrtti and full-on raganuga-bhakti, which might be characterized by ekadasa-bhava meditation and asta-kaliya-lila smaranam. This middle position was termed “ajata-ruci raganuga-bhakti” by Sri Jiva Goswami, a somewhat oxymoronic phrase by which he referred to those whose sadhana is not yet fueled by taste (ruci), but can still adopt the practices of raganuga-bhakti according to their level of spiritual realization. For those whose inclination to follow in the wake of the love of the Vrajavasis is still weak, this amounts to maintaining a desire to become eligible for raganuga-bhakti. Thus while one’s focus at this stage begins to shift from a predominance of effacing the negative to a tangible desire for Vraja bhakti, there is still a huge gap between that and meditating on one’s siddha-deha in the kind of detail outlined by the eleven bhavas. Having a conceptual map of the territory is a good thing as long as people don’t think they’ve actually gotten standing in that realm just by acquiring the map. Presumably the audience Uttamasloka is addressing here may very well still harbor misconceptions about many things. If he succeeds in convincing them that they were mistaken and they wish to tread the raga-marga as outlined herein, they still have only the most meager eligibility for raganuga-bhakti. This means that they would need practical information on how to begin incorporating the elements of raganuga-bhakti while still being ajata-ruci sadhakas. But moreover, it means that they will have to engage in the sravanama-kirtanam of vaidhi-bhakti with a view to attain the stage of ruci in sadhana-bhakti. Ruci arises out of nistha, constant engagement in bhakti without confusion about Gaudiya siddhanta. Then in ruci the desire to attain an affectionate relationship with Krishna descends.

One issue that will definitely get the attention of readers is the section in Chapter 5 on whether or not manjari-bhava is the highest and only rasa for Gaudiyas. Uttamasloka makes the point, and rightly so, that manjari-bhava is not the only rasa Sriman Mahaprabhu made available, as some claim. One can in fact attain any one of the four primary rasas of Vraja bhakti (dasya, sakhya, vatsalya, and madhurya). Uttamasloka breaks with the tradition, however, when he concludes that manjari-bhava is not the highest attainment possible for the baddha-jiva. He arrives at his conclusions based mostly on the fact that the Goswamis, and Sri Rupa in particular in Sri Ujjvala-nilamani, have not directly written anything to indicate that manjari-bhava is any more exalted than any of the other gopi bhavas. Where the Goswamis do so, as in the case of Raghunatha dasa Goswami, Uttamasloka attributes it to their personal bias in favor of their own bhava and therefore should not be taken as statements of siddhanta on that bhava. This issue was discussed at length on the book’s forum with arguments for both sides given. I leave it up to the reader to decide whether the traditional argument or Uttamasloka’s is more compelling.

The overall tenor of Uttamasloka’s approach seems to be that the only way to attain one’s sidda-svarupa is to take up the meditational practices of raganuga-bhakti (such as those given in Dhyanacandra Goswami’s paddhati, included at the end of the book) in a systematic fashion. He says, “Make no mistake about it–there are specific detailed processes. To achieve the goal of direct association with Krishna in Goloka, in any of the four primary rasas—dasya, sakhya, vatsalya and, especially madhurya, all Caitanya Gaudiya Vaisnavas will necessarily tread this path.” (p. 11) Unfortunately the section seems to advocate  a “get your siddha-deha now” mentality, when in fact this sacred identity is a gift from the guru-parampara to be bestowed by the grace of Guru and Krishna. He also makes a statement to the effect that realization of the siddha-deha does not arise solely from chanting Harinama. Let us remember that Krishna is non different from his holy name. And all of this is somewhat surprising given the Saraswata sampradaya‘s history and emphasis and that he is a disciple of one of that sampradaya‘s most noteworthy members. It’s not difficult to bring evidence to the contrary to bear; Bhaktivinoda Thakura says in his Sri Nama-Mahatmya, “Such is the power he manifests that when his holy name starts to blossom a little further it then reveals his own divine form and qualities. Thus the holy name steals my heart and takes it to Krishna’s side. When the flower of the holy name is fully blossomed it takes me directly to Vraja and reveals to me his own love-dalliance. This name awards me my own eternal spiritual body, keeps me right by Krishna’s side, and completely destroys everything related to this mortal frame of mine.” Even more compelling is Gaurakisora Dasa Babaji Maharaja’s famous reply when asked about this issue: “The Hare Krishna mantra is a siddha mantra. Within this mantra are the siddha-rupa of Sri Krishna and the siddha-rupas of all living entities. If you chant the maha-mantra purely the syllables of the mantra will gradually reveal the spiritual form, qualities, and pastimes of Sri Krishna. This chanting will also reveal your eternal spiritual form, service, and the eleven particulars of your spiritual identity.”

My conclusion is that as a book to acquaint and inspire those who have yet to embark on the path of raganuga-bhakti it for the most part succeeds, but caveat emptor applies. An emphasis that diverges from that of Sri Siddhanta Saraswati’s along with heterodox theology mandates that the reader must have a very solid grounding in sastra as well as have competent guidance (either one’s diksa-guru or a siksa-guru, or both) for this information to bear positive fruit and for its wheat to be separated from its chaff.

89 Responses to Review: Realization and Manifestation of Your Eternal Identity