Review: Pluralism and the Mind 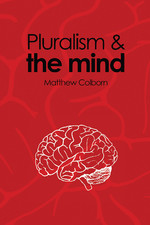 By Robert McLuhan, originally published on his blog, Paranormalia.

It’s normal to suppose that human beings are conscious. However, until recently science could barely bring itself to accept that there was such a thing as “consciousness.” Now it agrees that it does exist—sort of. Most neuroscientists and philosophers still think it’s an illusion, but since they have come up with viable tools and concepts they want to apply them to find out how the trick is done.

How can these wildly different viewpoints ever be bridged? And could there one day be a theory about consciousness that will satisfy everyone?

These are questions that Matthew Colborn asks in his new book Pluralism and the Mind, a critique of current neuroscience and philosophy of the mind. Colborn is a freelance writer with a background in cognitive science and an interest in parapsychology. The book provides an admirably clear overview of the existing approaches and some of the more “alternative” ones also. That makes it appealing to people like me who are skeptical about the insistence that “the mind is what the brain does.”

A typical statement by a neuroscientist is that

the mind is fundamentally a sentient computing device, taking sentences as input from sensory transducers, performing logical operations on them, and issuing other sentences as output.

It makes no sense (in scientific terms) to try to distinguish sharply between acts that result from conscious intention and those that result from our reflexes or are caused by disease or damage to the brain.

Colborn starts by showing us how wildly incongruent such confident assertions seem in the face of very different types of conscious activity, from the typical stream of thoughts and impressions in daily life, to considering the view from the window, or, at the further extremes, mystical experience and ketamine drug trips. Then again, how can the life-or-death decisions involved in the struggle of a concentration camp inmate to survive be considered on the same level as unconscious reflex actions?

A lot of the book is a well-argued critique of current thinking, which largely follows from the insistence on a monist (non-dualist) materialist framework for understanding consciousness. Colborn puts this into a historical context. Deterministic ideas were developed in the seventeenth century but received a strong impetus after Darwin, with T.H. Huxley arguing that consciousness was a side effect, or “epiphenomenon,” of brain activity, having no causal effect. In the twentieth century the philosophy of mind was seduced into behaviourism and the idea of the “blank slate.” In the context of ‘a Cold war technocracy,” he says, “humans and machines came to be seen as literally interchangeable.”

That still largely applies. Behaviourism gave way to a modified view derived from information theory, of which Daniel Dennett is the best known but by no means the only advocate, that we don’t have subjective experiences at all—we just think we have them. The logical extension of this is that we don’t have free will: the appearance of it is just an illusion. Our brains make up our minds, and if we think we do something because “we” will it, we’re wrong—we’re just rationalizing it after the fact.

Despite the limits of physicalism, which Colborn ably exposes, there remains a confidence that wholly conventional theories will eventually crack the problem, given enough time, money and new techniques. This confidence is largely the result of the burgeoning of neuroimaging technology, which is correlating brain activity to specific types of mental activity in ever greater detail.

But here too there are important constraints. Mapping various localities is good as far as it goes, but it also exposes how widely distributed cognitive functions actually are. That makes it hard to establish whether a particular area is carrying out a specific task on its own or whether it is just a critical line of communication between other areas. Some of the apparently intractable questions surrounding memory—how it is defined; how it persists; whether it really is encoded via synaptic charges—may be settled as neuroscience develops. However neuroimaging only provides correlations, not explanations. Also, there is still no theoretical framework that can accommodate all the data. Colborn quotes Steven Rose’s remark that we are “still trapped within the mechanistic reductionist mind-set within which our science has been formed.”

It’s true that neuroimaging data provides abundant indications of information-processing and representations taking place in the brain. But these presuppose a conscious observer to make sense of them: the information that researchers derive from the results of their experiments is in their minds, not in the brain itself. We can’t point to evidence of particular types of brain activity and call it a “brain language” of symbols, information and representation, any more than we can call rings in tree trunks a “language” from the fact that we can use them to derive information about past climate conditions.

Colborn’s preference is for pluralism, following William James’s pragmatic refusal to agree that the universe consists only either of matter or of mind. As James complained, “All philosophers… have conceived of the whole world after the analogy of some particular feature of it which has particularly captivated their attention.” Colborn also frequently cites Paul Feyerabend, who challenged the right of science to insist on a single correct method, and instead advocated a more open, even anarchistic approach.

Accordingly he refers to thinkers with more radical views, lying at the margins of established thinking. One is Walter Elsasser, who argued for an alternative “holistic” biology, on the grounds that some organisms are too complex to be understood in terms of their constituent parts. Elsasser’s work bears some resemblance to Rupert Sheldrake‘s theory of morphic fields, Colborn suggests, although he adds that the latter is short on evidence to back it up. He looks, too, at the ideas of Mae-Wan Ho, who explores features of living organisms such as wholeness and individuality and has concluded that consciousness occurs throughout the whole organism.

He also examines Henry Stapp’s quantum model, which Edward Kelly discussed in Irreducible Mind as a possible contender for a dualist conception of consciousness. Stapp argues that neuron firings at the nerve terminals are capable of creating quantum effects, causing probability clouds to occur throughout the brain. If true, that would mean the brain’s operations cannot be understood purely in classical terms. His approach has been criticised on a variety of fronts, and Colborn himself thinks it will probably not be taken seriously until the role of quantum mechanics in biological systems is better understood. But even if the details are wrong, he points out, Stapp has shown that it is at least “possible to talk about the world in a formal way that is not wholly deterministic.”

The need for a pluralist approach becomes all the more pressing when we consider parapsychological phenomena, as Colborn believes we should. He is not at all dogmatic about this, but includes a brief consideration of psi phenomena, and tackles some of the key skeptical objections (for instance Ray Hyman’s insistence on treating parapsychology on the same level as physics and biology). Where survival evidence is concerned, he notes the difficulty of disentangling it from evidence of psi on the part of the living. The best we can do, he thinks, is balance probabilities in individual cases.

So Colborn ends by rejecting the view that a single model holds all the answers, and, when discovered, will sweep all before it. The current reductionist approach is too narrow, and also dehumanizing, and although dualism is severely problematic from a scientific viewpoint he sees a combination of both as the eventual solution. In other words, we may come to accept that both are valid within certain situations and not in others. He returns to Elsasser, who believed that, while science must remain “rational” there is no guarantee that nature can be comprehensively ordered into a rational scheme.

[T]he “universe of mindless, meaningless, brute physical particles” does not exist out there in the phenomenological world, but only within the models of science. To understand this, we should recall Protagoras’s point about “man being the measure of all things.” We project various qualities and properties out into the world, and as the ancients and medieval thinkers projected life and animation, many scientific rationalists tend to project mechanism and meaninglesness. But the latter is just as much a conceptual, imaginative vision as the former. The main reason it has such force is that it is built into the very fabric of our culture, and reinforced via the practical marvels and achievements of science. But these achievements do not point to such a vision being “true’; in fact, Einstein was probably right to suggest that they constitute fictions by which we make broad sense of the cosmos.

Admitting some form of dualist thinking would mean abandoning the hope of discovering a grand scheme of consciousness, he concedes, and it also smacks of relativism, which hard-headed scientists run a mile from. But it may be more realistic: we may have to accept that many conceptual worlds remain possible, and we must “learn to love difference.”

If we accept that all of our models are partial, distorted, and adaptations to local demands, cultures, environments, ways of life, etc. and that these external pressures themselves constantly fluctuate, then this pluralistic viewpoint seems preferable to a zero-sum battle for the One True Way.

In my view, this is science writing of the first order. It isn’t flashy—it contains few flamboyant images and metaphors—but it’s clear, detailed and thoughtful. It gives a highly readable account of the story so far, and if you want an account that is open to non-dualist thinking, this is an ideal choice. It also sticks relentlessly to the central theme: that the knowledge elite has created a series of myths and models which we are in danger of mistaking for reality itself, and that we need to remain open to all kinds of approaches, however heretical they may seem to some.

This is important, because there just isn’t much out there that challenges the materialist consensus about consciousness, that is also scientifically and philosophically literate, and that talks the language of the scientific mainstream. Irreducible Mind was something of an ice-breaker in that respect, and Colborn himself says it motivated him to put develop his own views. This new literature is significant for those of us who would like to see alternative approaches to consciousness taken more seriously. If we want parapsychology to be better understood, there needs to be a conceptual framework in which it starts to make sense.

Excerpts from the book can be read here. Colborn blogs here.

4 Responses to Review: Pluralism and the Mind