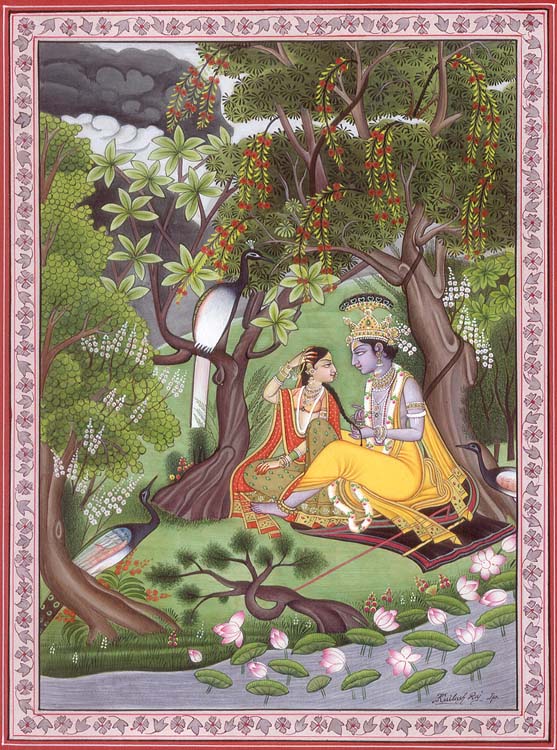 In his Yoga Sutras, Patanjali denies the efficacy of sexual contact altogether, attributing all impulses, sexual and otherwise, to impressions on the mind made by external objects. The ultimate goal of yoga in Patanjali’s system, kaivalya, is a state in which consciousness is aware only of itself, to the complete exclusion of external objects including the mind. As such, controlling one’s sexual energy is strictly a matter of restraining a desire that poses an obstacle to yoga: there’s no scope for spiritual sexuality in the Yoga Sutras.

By contrast, the ultimate goal of Vaishnava Bhakti (devotion to Vishnu or Krishna) is ascension to a spiritual world where innumerable enlightened beings enjoy spiritual relationships, especially with Krishna, who is the fountainhead of all relationships (hence, Krishna is the “Supreme Personality of Godhead“). The idea of a spiritual world within which sex life exists in an original form is unique to the philosophy of Vaishnava Bhakti. The Sanskrit term adi-rasa is used to indicate the original mood, or ‘flavor’, of the intimate relationship between Radha, the feminine aspect of Divinity, and Krishna, the masculine aspect. Radha is the embodiment of Krishna’s own potential for the experience of pleasure (hladini-shakti). As such, she is uniquely qualified to be the ultimate source of Krishna’s enjoyment. Even though Krishna is the personification of erotic attraction and the definitive object of devotion, the power of Radha’s devotion is so overwhelming that Krishna becomes her submissive lover (radha-preyan).

No pleasure can top the feeling of knowing that we’re the source of pleasure for the one we love. Radha loves Krishna immeasurably so she’s not motivated by a desire for her own pleasure; she’s motivated by the prospect of Krishna’s pleasure. By being the source of Krishna’ enjoyment, Radha’s enjoyment is automatically achieved. Inspired by Radha’s love, Krishna reciprocates by further inspiring her love and their exchange of love in blissful union increases exponentially and infinitely. The experience of such infinite pleasure (ananda) is the very nature of spiritual sexuality.

We experience a reflection of spiritual sexuality when our desire to please our beloved—and the pleasure we experience in doing so—totally eclipses any desire to be pleased by our lover. Conversely, when our pursuit of sex is motivated by a desire for our own sensual pleasure or ego fulfillment then the reflection is distorted by virtue of being based on a case of mistaken identity—thinking the spiritual self to be the material body—and a misunderstanding of our position—thinking ourselves to be the enjoyers rather than the enjoyed. From the perspective of devotional yoga, sexual indulgence merely for the sake of gratifying our libidinous desires is a symptom of estrangement from our true spiritual identity.

In a culture that regards guiltless self-pleasure as a paragon of liberation from the oppression of life denying religions and archaic social power structures, this proposition will sound very counterintuitive or even regressive. From the standpoint of yoga, however, what’s really life denying is when a quantum of eternal spiritual consciousness misidentifies itself as a temporary material body. Though animated by a resident consciousness and used as a vehicle for sensual experience, our material bodies are actually as lifeless as the keyboard on which I’m tapping out these words, ‘alive’ only in the sense that someone is living in it, and will ultimately be a vehicle for the experience of death. Death is about as life denying as life denying gets.

“An intelligent person does not take part in the sources of misery, which are due to contact with the material senses. Such pleasures have a beginning and an end, and so the wise do not delight in them.” Bhagavad Gita 5.22

In my next post I’ll offer some thoughts on how something that tastes like nectar in the beginning but acts like poison in the end can be dovetailed into something that leads to non-stop nectar.