The Philosophy of Captivity 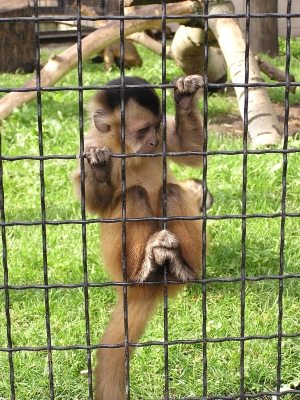 An interview with Lori Gruen by Richard Marshall, originally published at 3:AM Magazine.

3:AM: A recent book of yours looks at ethics and animals. You begin by looking at the position of human exceptionalism, something that goes back to at least Aristotle. What is the position, and is it a kind of default position for those who just don’t think we should think about animals ethically?

LG: Human exceptionalism is a prejudice that not only sees humans as different from other animals but that also sees humans as better than other animals. Of course humans are unique in a variety of ways, although those differences are often articulated based on naïve views about other animals. In Ethics and Animals, I explore some of the claims that have been made to differentiate humans from other animals (that we are the only beings that use tools or that use language or that have a theory of mind) and show that they do not establish that humans are unique in the ways postulated. But I also discuss the ways that other animals are indeed different from us and different from each other. These differences are important for understanding them and for promoting, or at least not negatively impacting, their well being.

Human exceptionalism also underlies skepticism about including other animals in the sphere of moral concern. It is related to two other views that are discussed more often in the literature about moral considerability – speciesism and anthropocentrism. Speciesism is the view that I only owe moral consideration to members of my own species. Although this view is usually thought to be focused on humans, it seems consistent with the view that only Vulcans matter to members of that species, or only orangutans matter to that species. Anthopocentrism is the view that humans are at the center of everything and that everything is understood through our human interpretive lenses. Of course we humans experience everything as humans, so in some sense humans are necessarily the center of our own perceptions, but that doesn’t mean we are unable to try to understand or care about non-humans. There is a sense in which we are inevitable anthropocentrists, but we needn’t be human exceptionalists.

Human exceptionalism sees humans as the only beings worthy of moral concern. Normative exceptionalist arguments generally fail in one of two ways—they pick out a supposedly unique characteristic or property upon which moral worth is supposed to supervene but it turns out that either not all humans have that property or that humans aren’t the only ones that have it.

3:AM: Are marginal cases relevant?

LG: And this is why marginal cases are relevant. If there are some humans who do not have the morally valuable traits that the human exceptionalist prize, but they are nonetheless included in the group of those who do have the traits, then this suggests that it isn’t that trait that is morally important, but species membership. But membership in a species isn’t morally interesting and assigning moral significance to membership in a species amounts to a prejudice in favor of those thought to be in one’s group. I myself am uncomfortable with the “marginal” cases terminology, but it is a remnant of the human exceptionalist view that promotes the idea that all humans fit neatly into a category based on morally worthy properties that only humans share, when there are no such properties.

3:AM: Why is the ethical case about animals so important? If you want to stop people being nasty to animals then aren’t there things other than morals you could or should appeal to? Couldn’t taste do the job i.e. we ought squash bugs because it’s disgusting? Or it’s unfashionable now, so nineteenth century etc?

LG: The magnitude of the harms done to animals is almost incomprehensible — 60 billion suffer before they are slaughtered for food in global industrial agricultural production annually and that contributes more greenhouse gas emissions than any other sector, which in turn is wreaking havoc on animal habitats on land and in the sea. When we also consider the additional threats that other animals face from human activities, it becomes clearer that the problems are structural and remedies cannot solely rely on individual tastes. But there are some really hard philosophical questions about what, if anything, individuals can do to help curtail these harms.

Consider what sometimes gets called the “impotence problem.” When one goes out to eat and orders bbq chicken rather than a veggie burger, the chicken isn’t slaughtered-to-order, so buying the veggie burger doesn’t save any particular chicken’s life. It seems that whatever one orders, it doesn’t really have an effect either way on whether chickens suffer and die in food production. But surely individual actions must have some impact since if everybody abstained from eating chickens that would make a very large difference to very large number of chickens. This is one sort of problem Derek Parfit discusses in Reasons and Persons and Shelley Kagan and others have taken up by considering the impacts of our choices on other animals. Though I won’t rehearse some of the proposed solutions to the problem here, what I want to mention is that when we are exploring the bad consequences of complex systems, ethical and political analyses are crucial.

In saying that, I don’t want to completely dismiss the role that taste and disgust can play in perhaps making people aware of an ethical problem and motivating and sustaining people to stop harming others. But to my mind, taste and disgust, which are themselves shaped by cultural and social norms as well as idiosyncratic personal histories, are not particularly reliable and in the face of mass harms and injustice, are not always helpful.

3:AM: How important is it for people arguing for animals to be treated ethically to know what is happening to them? Your book is really full of information about this – is there a sense that you feel people who resist the ethical stance are ignorant of current problems?

LG: I’ve always been puzzled by the way that some moral philosophers create extraordinarily far fetched examples and then ask us to see what sorts of intuitions we have about these cases. I am skeptical that any intuitions we might dig up contain important ethical insights. But I’m also puzzled by those who argue from abstract general principles, for example, about the unethical treatment of causing other animals to suffer or fail to flourish, without knowing many details about particular animals and what might constitute their well-being. Having specific details are crucial for making ethical judgments. So, I think we should try to engage in some version of the process Rawls’ called reflective equilibrium in which we consider the details as we understand them (and we should also be reflective about what we see as details to start with), our intuitions, and our more general ethical and political commitments.

Having details about the general treatment of other animals combined with particular cases promotes the reflective process. But there is more needed than just knowing what is happening to them. I think an under theorized part of our ethical lives relationships – what relationships are we in, what is the nature and quality of those relationships, and what obligations those relationships generate? Once we see that we are in relationships with specific animal others and come to understand how our actions impact individuals and their conspecifics, we can view our responsibility or complicity differently. Nobody wants to be in a bad relationship, so part of what I do in my work is include descriptions of these relationships in ways that allow for re-consideration.

One of the central ideas that I have been developing is what I call “entangled empathy” which is a type of moral perception directed at attending to the well-being of others. Very briefly, the “entanglement” part of the idea is based on a recognition that we are in all sorts of inextricable relationships with one another. The “empathy” part is not the standard form of moral emotion often discussed in the literature, but rather it refers to a perceptive skill that involves affect and cognition. Entangled empathy is developed by having a fuller picture of what is happening to others, coming to discern what the interests of others may be, imagining how those interests are experienced, and figuring out how our actions directly and indirectly impact another’s well-being.

3:AM: So what are some of the key contemporary issues that help mobilise ethical arguments towards animals?

LG: There are two current issues – captivity and industrial animal agriculture — that have generated a lot of attention to animals of late and that have lead to questions about our obligations to them, to ourselves, and to the rest of nature. The issue of keeping animals captive in zoos and aquaria has become a pressing topic again. The movie Blackfish that looks behind the scenes at Sea World, the plight of elephants and polar bears suffering in unnatural conditions in zoos, and the practice of publicly killing animals at zoos in Europe have lead to renewed discussion of questions about liberty, conservation, individual well-being vs. species protection, and reproductive freedom. (see my oup blog and Ethics of Captivity).

In addition, as concerns about climate change become more pressing, awareness of the destructive contribution from industrialized food production has lead many people to reevaluate what they eat. The United Nations conservatively estimates that roughly 18% of the total greenhouse gases emitted come from industrialized livestock production, more greenhouse gas emissions than all transportion—planes, trains, and cars—combined. Rajendra Pachauri, chair of the Intergovernmental Panel on Climate Change (IPCC), made an explicit call urging individuals to “Please eat less meat—meat is a very carbon intensive commodity …”

More people are giving up animal products once they recognize that personal taste can’t justify harms to other animals, the environment, and future generations. Of course, as human populations grow and wealth accumulates, more animals then ever before are being threatened and killed. Ethical arguments that convince individuals only go so far and there is a dire need for ethical engagement that can impact policy.

This article was originally written for and published at 3:AM Magazine, and is partially reproduced here without the permission of the author, who is not affiliated with this website or its views.