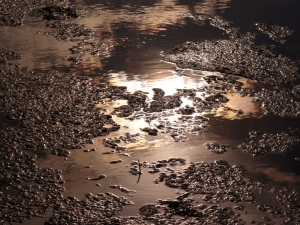 A poem by Prahlada Bhakta Das

People in a leadership position
within a spiritual institution
are faced with much tribulation
in the form of much discussion.

Maybe they feel that spiritual life
is full of problems, full of strife.
But actually real spiritual life
has no problems and is without strife;
It is a free, joyful and fulfilling life.

Problems arise in material life,
not spiritual life—the life of the knowledge-wife.
It is the adulteration of materialism in spiritual life
that leads to problems and strife.
And when not checked, such problems run rife.

Life in spiritualism can lead
to problems when we feed
the anarthas of lust, illusion, greed,
envy, pride, anger—and thus we bleed.

To cure this bleeding we try to find a solution.
But we are unwilling to consult a spiritual physician
just because he/she is outside our institution.

But we forget that it’s the institution that is bleeding
with multitudes of problems about which its members are pleading.
Thus the solution has to come from a person who knows the art of healing,
who is experienced, skillful, wise, and for our misery has a feeling.

But puffed-up by our illusion
we ignore that pure illumination
and with our immature realization
we think of restoring the situation.

Policies not based on clear shastric vision
are bound to create further confusion,
thus causing more misery—opposite of the expectation.

And,
Blinded by our consciousness of institutionalization
we launch a campaign of defamation
of the person who has the solution
to our problems, misery and confusion.
Alas! What a hopeless situation!

The scriptures warn with repetition
that the greatest damage one does to one’s life of devotion
is by criticizing a saint of high realization.
Just see this degraded condition
that we find faults with the person who has the solution!

And we think that spreading such defamation
is the solution to our diseased condition.
Thus we destroy our spiritual lives and our institution
with the imagined solution, which in fact is the greatest pollution.