The Devotional Life of Satananda dasa 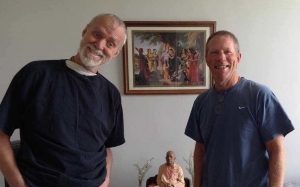 Satananda dasa, (James Wright) an initiated disciple of Srila Prabhupada, who had been suffering from Alzheimer’s, passed away peacefully on March 26th, 2015 in Watsonville, California. He was 65 years old.

Satananda dasa first came into contact with Krishna consciousness through devotional literature he had acquired while stationed with the U.S Navy in Japan. Inspired, Satananda dasa joined the ISKCON center in Los Angeles when his term of enlistment ended. There he served as a book distributer and was initiated by Srila Prabhupada in 1972. Hearing of his previous duty station with the Navy Srila Prabhupada sent Satananda dasa to help pioneer the Krishna consciousness movement in Japan.

Satananda dasa arrived in Japan in late 1972 and enthusiastically joined Trivikrama Swami, Satyadev dasa, Mahaguna dasi and the few devotees who were preforming daily harinam sankirtana and distributing literature on the busy crowded streets of Tokyo. A growing temple established, Satananda dasa settled in and accepted Japan as his prabhu-datta-desh (appointed place of service), learned the language, and married Kadamba dasi, one of the first Japanese devotees.

In 1974 Guru Kripa and Yasodananda Swamis arrived in Tokyo with ten brahmacharis and orders from Srila Prabhupada to collect donations to establish ISKCON temples in the Holy Lands of Vrndavana and Mayapura. Embracing those orders Satananda dasa was among the unsung heroes who worked tirelessly collecting the funds necessary to build the magnificent Krsna-Balarama Temple in Vrndavana, and the Mayapura Chandrodaya Mandir at the birthplace of Sri Caitanya Mahaprabhu in West Bengal. Srila Prabhupada honored the devotion of these Swamis (which of course includes all the devotees who served under them) in bronze on the wall of his Krsna-Balarama Temple. Doing so insured that all who entered there would remember and find inspiration in the sacrifice of those who had so dedicated themselves to fulfilling Srila Prabhupada’s vision for Mayapura/Vrndavana.

At the time, Guru Kripa Swami was also ISKCON’s governing commissioner for the state of Hawaii. When Satananda dasa was on hiatus from his service in Japan he developed his cooking skills there, becoming famous for the Sunday feasts he prepared at the ISKCON Temple on the Hawaiian Island of Oahu. His specialty being jalebis, served to the guests hot and crunchy! Afterwards he would personally approach each attendee for a donation for the next Sunday feast. Having received such special care and attention few guests were able to resist his humble entreat. Along with preparing and collecting donations for the Sunday feast at the temple, Satananda dasa also put on a free lunch program every weekday at Ala Moana Beach Park in downtown Honolulu. Altogether Satananda dasa served Srila Prabhupada in Hawaii and Japan from 1972 to 1985, fathering son Ramalaxman, and daughters Puja and Lila, along the way.

In addition to his service in Japan and Hawaii, and to the Mayapura/Vrndavana projects, there is yet another way that all sincere Vaisnavas are indebted to the devotion of Satananda dasa. After the disappearance of Srila Prabhupada, and in accordance with his instructions, Satananda dasa was among the first ISKCON devotees to approach Srila B.R. Sridhara Maharaja for guidance in Krishna consciousness. Accepting him as his siksa guru, Satananda dasa asked Srila Sridhara Maharaja a number of pertinent questions on the guru/disciple relationship, particularly about the problematic issues that arise after the disappearance of the diksa guru. Many of these questions and the answers he received were recorded and preserved for the benefit of future devotional generations in Srila Sridhara Maharaja’s definitive work on the subject “Sri Guru and His Grace.”

Satananda dasa remained in lifelong reverence to his gurus Srila Prabhupada and Srila Sridhar Maharaja. In later years Satananda dasa assisted Swami B.V. Tripurari with his preaching missions in Oregon, California, and Costa Rica, while providing for and raising his three beloved children. Always jovial yet self-effacing, after years of service, this delightful devotee left this world listening to Srila Prabhupada chanting the holy Name of Krishna, surrounded by his loving family and friends.

One Response to The Devotional Life of Satananda dasa