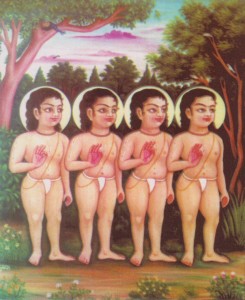 The four Kumaras are sons of Lord Brahma (the celebrated “Creator god,” of the universe in Hinduism, who is more accurately the “Engineer” of the Universe since he combines the ingredients supplied to him by God). They’re great realized sages appearing as young, prepubescent children, who were mystics fixed on the impersonal, or Brahman, all-pervading energy, of God. They are free from material bias, distinction, and fear, having no conception of “ours” or “theirs.” Free to travel at will, they do so with no material purpose, but only to share their wisdom. Once they desired to visit the kingdom of God. Coming to the outskirts of His spiritual kingdom, they began moving through the seven gates which surrounded Lord Vishnu’s abode. When they arrived at the 7th and final gate they were checked from entering by the gatekeepers, Jaya and Vijaya.

These sages were used to traveling anywhere they desired without hindrance, so they were surprised to be checked by the doorkeepers. The Kumaras evaluated Jaya and Vijaya from their spiritual vision of Oneness (we all see according to our conceptions, even spiritual ones). In their opinion persons who make distinctions between souls, or who have a bias for, or against someone or something, have material vision, since everything is one substance, Brahman. Thus, the Kumaras thought the doorkeepers unfit to live in the Lord’s abode of perfect harmony—even thinking them imposters, since surely no one in this abode should fear apparent “outsiders,” or think with bias that anyone was either fit or unfit to enter. Becoming angry they considered a suitable punishment and thought of sending them to the material world which is full of duality and false distinctions between souls.

Being cursed by the sages the doorkeepers fell at the feet of the sages. While they accepted the punishment as fitting they prayed never to forget Lord Vishnu, which was intolerable for them. In the midst of this conversation Lord Vishnu, who had orchestrated the situation for his purposes, arrived on the scene. Praising the Brahmin sages, and pointing out how dear they were to him, the Lord spoke how Brahmins should never be offended. However, upon beholding the Lord of the Universe, and smelling the tulasi on his feet, the sages had a change of heart, and became devotees of the Lord. They discovered that the Supreme Light of Brahman, was his halo, or effulgence, and not the final word in transcendence. Additionally they felt they had made a mistake and had cursed faultless persons. However, the Lord said that the curse should remain. Lord Vishnu said that actually the offense was made by him personally since his servants and he, were one.

Hearing this statement, the Kumaras realized that beyond the duality and bias of the material world, there is a spiritual bias, or a sense of Oneness between the servants of God and God himself. There are preferences and desires in this world of loving service, but they are all for the pleasure of God, and without conceptions of material duality, or a sense of separate interest based on the material ego—I, me, and mine, etc. This is difficult for mystics to understand, as they are endeavoring to be free from attachment, fear, anger, or making distinctions, and at first glance it seems the spiritual world has the same things, and must be a false conception. The impersonal conception of the Absolute as merely energy is just the opposite of our material experience, yet true transcendence is so much more.

However, as I have explained, the difference between the material and spiritual world is in the determination of who or what the center is, either one’s self, or God, in his infinite manifestations. In the material world the soul is ruled by God’s material energy and conceptions of duality, or being separate from God, while in the spiritual realm, souls realize both their spiritual individuality as servants of God, and their oneness with him, as his part. Thus there is oneness and individuality, and a natural bias based on one’s spiritual relationship to God and taste in loving service. Material bias is problematic, while spiritual bias is an ornament of the soul’s love for God. The history of the cursing of Jaya and Vijaya and the spiritual awakening of the four Kumaras is profound. I have touched on only a few points in relationship to the subject of bias. I pray you have found this as interesting, or more so, than I have!

As far as becoming free from material bias, we can limit those to the degree we realize our selves as souls beyond the dualities of the material world. Interestingly, it is our spiritual bias or inclination that will help carry us to the spiritual world—that, and the Lord’s bias towards us in the shape of his merciful help to free us. Krishna loves all, and yet he favors, or is biased toward his devout. Our bias toward a particular relationship with the Lord, and his towards us, is the perfection of bias! Everything has its place and utility for a person in knowledge and spiritual love.