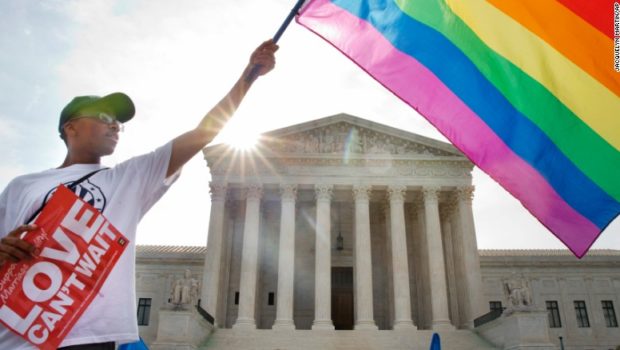 Same-Sex Marriage in the U.S.A: Are You Ready? 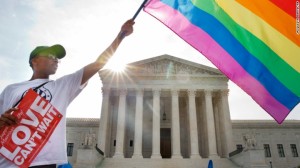 As societies advance, a person’s material body, gender, race, caste, etc. matter less and less while individual merit and the ability to empathize with others matter more and more.

This statement became all the more true today in the United States of America. By order of the Supreme Court, the United States became the 21st country in the world to legally recognize same-sex marriage. The sex or gender of one’s partner will no longer be relevant in determining whether or not any loving adult couple can marry. This is significant not only because of the United States’ example and influence in the world but also because of its large population (approximately 321 million, the third most populous nation after China and India).

The U.S. Supreme Court has ruled: “The limitation of marriage to opposite-sex couples may long have seemed natural and just, but its inconsistency with the central meaning of the fundamental right to marry is now manifest. With that knowledge must come the recognition that laws excluding same-sex couples from the marriage right impose stigma and injury of the kind prohibited by our basic charter.”

Vaishnavas and people of good heart should appreciate this social progress. Whenever a society leaves behind bodily-based criteria in favor of equal opportunity according to individual merit, humanity advances as a whole. We have seen this with the termination of base human practices such as slavery, the repression of women, racial segregation, the caste system, persecution of gay people, and so on. Allowing gay citizens to fully participate in society on an equal footing, including the right to marry, not only recognizes their humanity but enables them to reach their greater potential in life. It removes stigma and the social divisiveness that occurs whenever we treat an entire class of people less than ourselves.

Social change and its acceptance can be difficult, especially for older members of society who are accustomed to the ways of the past. Nevertheless, it is important that Vaishnavas rise above bodily prejudice and the negative mindsets of previous centuries. I have seen this become a real problem for many of my Godbrothers and Godsisters, and for this reason I would like to outline eight important points from Vedic literature, with affirming quotes, to illustrate this issue in a positive and progressive light:

“There are also third-sex [homosexual] citizens, sometimes greatly attached to each other and with complete faith in one another, who get married together.” (Kama Sutra 2.9.36)

“Citizens with this kind of [homosexual] inclination, who renounce women and can do without them willingly because they love each other, get married together, bound by a deep and trusting friendship.” (Jayamangala, twelfth-century commentary)

“Ah! Vaishnava-dharma is very liberal. All jivas have the right to vaishnava-dharma; that is why it is also known as jaiva-dharma. Even outcastes can take up vaishnava-dharma and live as grhasthas, although they are not part of varnasrama.” (Jaiva Dharma, Ch. 7, p. 172)

“A shrewd man, expert in one thing or another, considering both ethics and his own material interests, must not be a sensualist thirsty for sex, but establish a stable marriage.” (Kama Sutra 7.2.59)

“One should not enter marriage with a desire to beget children, or to worship the forefathers and Prajapatis. It is favorable to bhakti to think, ‘I am only accepting this servant/maidservant of Krsna so that we can assist each other in Krsna’s service and establish Krsna-centered family life together.’ Whatever one’s materially attached relatives or family priest may say, ultimately one reaps the fruit of one’s own determination.” (Jaiva Dharma, Ch. 7, p. 164)

“Complete celibacy is very essential for the student’s advancement in spiritual life, but at the moment such brahmacari (unmarried celibate) life is not at all possible.  The social construction of the world has changed so much that there is no possibility of one’s practicing celibacy from the beginning of student life.” (Bhagavad Gita 8.11, purport)

“Even a man of knowledge acts according to his own nature, for everyone follows his nature.  What can repression accomplish?” (Bhagavad Gita 3.33)

“It is far better to discharge one’s prescribed duties, even though they may be faulty, than another’s duties.  Destruction in the course of performing one’s own duty is better than discharging another’s duties, for to follow another’s path is dangerous.” (Bhagavad Gita 3.35)

“These four—irshyaka, sevyaka, vataretas, and mukhebhaga [three of which are homosexual]—are to be completely rejected as unqualified for marriage to any woman, even by a wife who is no longer a virgin.” (Narada-smriti 12.15)

“The humble sage, by virtue of true knowledge, sees with equal vision a learned and gentle brahmana, a cow, an elephant, a dog and a dog-eater [outcaste].” (Bhagavad Gita 5.18)

“It is said that by modern medical treatment, a male can be transformed into a female, and a female into a male. The body, however, has no connection with the soul. The body can be changed, either in this life or the next. Therefore, one who has knowledge of the soul and how the soul transmigrates from one body to another does not pay attention to the body, which is nothing but a covering dress. Panditah sama-darsinah. Such a person sees the soul, which is part and parcel of the Supreme Lord. Therefore he is a sama-darsi, a learned person.” (Srimad Bhagavatam 9.1.33, purport)

“As the blazing fire of death, I cause great fear to whoever makes the least discrimination between himself and other living entities because of a differential outlook. Therefore, through charitable gifts and attention, as well as through friendly behavior and by viewing all to be alike, one should propitiate Me, who abide in all creatures as their very Self.” (Srimad Bhagavatam 3.29.26-27)

“Sri Krsna is very quickly satisfied with one who maintains a compassionate mood towards other jivas, and who does not give them any kind of anxiety through his body, mind and words. Compassion is the main dharma of the Vaishnavas.” (Jaiva Dharma, Ch. 20, p. 490)

“The Lord is very satisfied with His devotee when the devotee greets other people with tolerance, compassion, friendship and equality.” (Srimad Bhagavatam 4.11.13)

“Those who think that devotion to God and kindness to living entities are different to each other and act accordingly in their life will not be able to follow devotional culture.  Their attempt is only a resemblance of devotion.  All types of beneficence to others like kindness, friendliness, forgiveness, charity and respect are included in devotion to God.” (Sri Tattva-sutram, verse 35)

“Moreover, people who have accepted sannyasa within varnasrama, and have then fallen from their position, may later adopt pure bhakti by the influence of sadhu-sanga.  Such people can become grhastha-bhaktas, although they are also outside the jurisdiction of varnasrama regulations.” (Jaiva Dharma, Ch. 7, p.172)

Srila Prabhupada to Upendra dasa, after bemoaning his need for a male partner: “Just find a nice boy then, and settle down!” (Related by Adikarta dasa, 6/28/2001)

There are various types of exceptional marriages that are not within the ordinary rules and regulations of varnasrama but which modern-day Vaishnavas recognize as helpful in the cultivation of bhakti.  Such exceptions to the general rule are not typically performed in front of temple Deities but nonetheless honored by an understanding and loving community of Vaisnavas.  For instance:

Considering all of the above exceptions, many of which are quite common within contemporary Vaishnava communities, can we not also extend our understanding and compassion to include:

… and if not, what does that say about us?

A person’s gender and sexual orientation are no longer criteria for civil marriage in the United States of America—and that is a good thing!  What truly matters is whether or not a person needs to marry and our ability to empathize with that reality.  The above quotes and their enlightened approach on this issue should help Gaudiya Vaishnavas keep up with the 21st century, as long as we can take them to heart.  Are our hearts becoming softer or harder through the practice of Krsna consciousness?  Ready or not, the caravan passes.

44 Responses to Same-Sex Marriage in the U.S.A: Are You Ready?