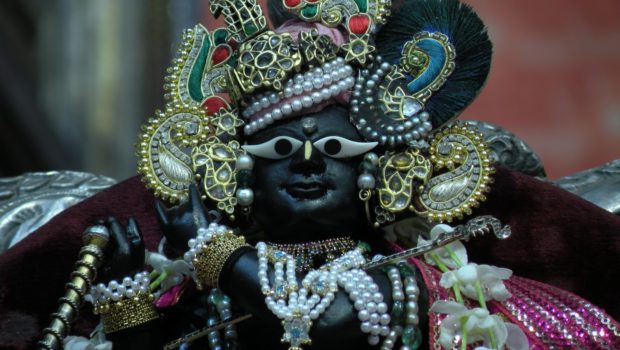 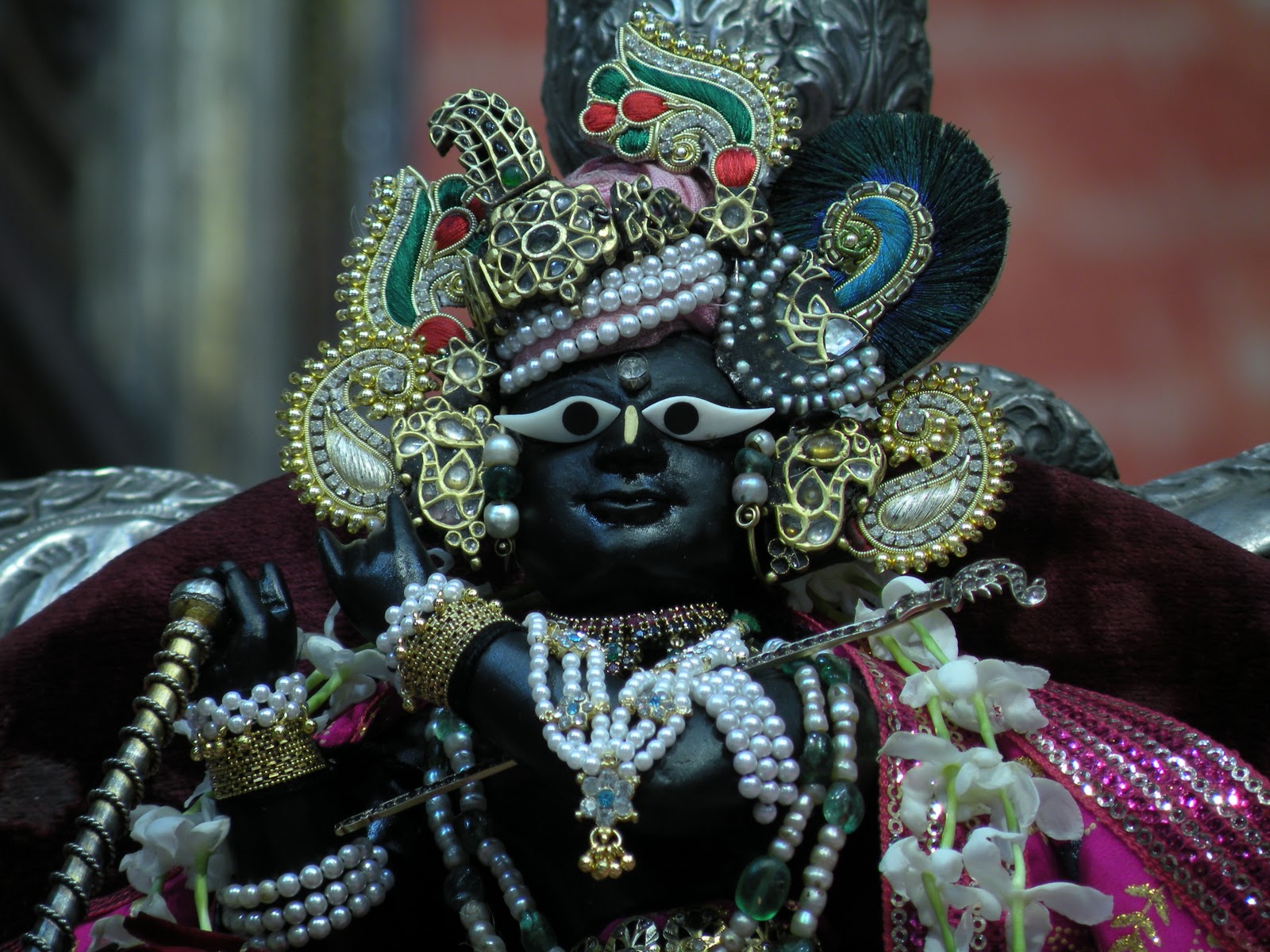 By Swami B.V. Tripurari, transcribed from a speech delivered on July 23, 1997.

Gopala Bhatta Goswami was a young lad of seven years when he met Mahaprabhu in Sri Rangam. Mahaprabhu travelled for two years in South India, and during his trip he visited Sri Rangam. This visit took place during the caturmasya, the four months of the rainy season, which begin on the guru-purnima, Sanatana Goswami’s tirobhava.

While visiting Sri Rangam, Mahaprabhu was invited to stay in the house of Venkata Bhatta. Venkata was the head priest of the Sri Rangam temple, which is the headquarters of the Sri sampradaya of Ramanujacarya. The Sri sampradaya is an important Vaisnava sampradaya, and the head priest of the Sri Rangam temple is a very prominent person in the lineage to whom kings would bow their heads. Such was the position of Venkata Bhatta. Yet his greatness extends further in that he fathered the illustrious Gopala Bhatta Goswami. It is said that the father is born again as his son. If this is so, Venkata Bhatta is worshippable not only by kings, owing to his standing in the Sri Vaisnava lineage, but by saints as well for that which he did in the form of his son, Sri Gopala Bhatta Goswami.

First, Mahaprabhu asked, “Why is it that Laksmi, the wife of Narayana, wanted to leave Narayana and participate in the rasa dance with Krishna?” Thus he questioned Laksmi’s chastity. Venkata Bhatta replied, “There is no difference in tattva between Krishna and Narayana, although in consideration of rasa vicara, Krishna holds a higher position. Essentially the two are one person. So there is no fault on her part according to Vaisnava siddhanta, siddhantatas tv abhede ‘pi srisa-krishna-svarupayoh, “Although they are nondifferent in terms of tattva,” rasenotkrsyate krishna-rupam esa rasa-sthitih, “Krishna is superior in terms of power to attract due to his being the emporium of aesthetic rapture.”

Mahaprabhu asked, “Why is it that although Laksmi wanted to enter the rasa dance, she could not do so?” This question was over the head of Venkata. He could not fathom the answer, so he replied, “Iha pravesite nare mora mana.” In effect he said, “Only one who would think to ask such a question could know the answer. Ami jiva ksudra-buddhi sahaje asthira, I am a jiva with limited intelligence, and you are the supreme Lord himself who knows his own ways, tumi saksat sei krishna, jana nija-karma.”

Approvingly, Mahaprabhu replied: “Because she kept the ego of Laksmi, the body of Laksmi, she could not enter the rasa dance. To enter there requires a gopi-deha.” Gopi-deha means gopi-bhava, because that deha is a bhava, that body is a bhava, not anything material.

Hearing this from Mahaprabhu, Venkata was converted, ebe se janinu krishna-bhakti sarvopari, “Now I realize that Krishna bhakti is the supreme form of worship.” In this way the whole family was converted. This was an extraordinary accomplishment on the part of Mahaprabhu. We hear of Mahaprabhu’s converting all types of people, and even animals in the forest. It is quite difficult to turn a wild animal into a premika. But this is nothing in comparison to Mahaprabhu’s conversion of stalwart devotees of Laksmi-Narayana, whose object of love is spiritual. The animals and common peoples’ objects of love are material. To turn them in the spiritual direction is much easier than to turn someone whose object of love and is already spiritual to another spiritual object of love—from Laksmi-Narayana to Radha-Krishna.

Venkata’s family had strong standing in the worship of Laksmi-Narayana. Some say they had attained sthayi-bhava in dasya bhakti for Narayana. This cannot be changed by anyone but God himself. This is the glory of Mahaprabhu, svayam bhagavan.

At this time Gopala Bhatta Goswami was just a young lad. He had a dream in which he saw a vision of the Navadvipa pastimes of Mahaprabhu and realized that the pastimes of Navadvipa are nondifferent from Vrindavana. He saw this, and the fact that Mahaprabhu is not only svayam bhagavan, but svayam sakti as well—Radha-Krishna.

Mahaprabhu then instructed him: “You stay here with your parents until they expire, and then go to Vrindavana. But in the course of going there, first go to the Himalayas, to Gandaki, and bring Salagramas from there for worship.” So through Gopala Bhatta, Mahaprabhu introduced the worship of Salagrama-sila, a vaidhi-marga Deity, into his raga-marga sampradaya.

Then Mahaprabhu left, and Gopala Bhatta took initiation from Prabodhananda Sarasvati, the brother of Venkata Bhatta. After his parents expired from the world, he followed the instruction of Mahaprabhu, by which Mahaprabhu had told him he would again get his darsana. He went to Gandaki. He put his lota in the water for bathing, and twelve Salagramas came within it. It is said that he put them back in the river again, and once more put the lota in the water. Again the same Salagramas came out. He was a little shy to take so many silas at first, but he realized after some time that they wanted to go with him. He took them in a cloth tied around his neck. On his way to Vrindavana, he stopped and initiated three Gaura brahmanas, bringing them with him to Vrindavana. Once there, he took shelter of Rupa and Sanatana Goswamis, and he worshipped these Salagramas for some time.

Gopala Bhatta Goswami became very prominent in Vrindavana, yet he remained very humble, so much so that he asked Krishnadasa Kaviraja Goswami not to mention his name in his treatise Caitanya-caritamrta. Gopala Bhatta Goswami came to Vrindavana with his own newly initiated disciples. Jiva Goswami was junior to him, while Rupa and Sanatana were his seniors. These three referred all of the people who came to them for initiation to Gopala Bhatta Goswami. He was the main diksa-guru amongst the six Goswamis. Indeed, Rupa Goswami had only one initiated disciple, Sri Jiva, and we know of no diksa line of Sanatana Prabhu.

One reason that Gopala Bhatta Goswami was the principal initiator is related to the preaching strategy of the Goswamis. They were not only prema-bhaktas of the highest order, they were also politically astute, culturally wise, and very pragmatic.

Externally, Gopala Bhatta Goswami was from a very sophisticated South Indian brahmana family. In consideration of the religious climate, Gopala Bhatta Goswami’s parentage and religious background made him better suited to act in the capacity of diksa-guru. This perhaps helped to make the fledgling sampradaya less controversial. With this in mind, Gopala Bhatta compiled the Gaudiya Vaisnava smrti, Hari-bhakti-vilasa, much of which is a concession to the orthodox brahminical climate that permeated the religious landscape of the time.

Gopala Bhatta is also a sastra-guru of our bhakti sastra. In Hari-bhakti-vilasa and Sat-kriya Sara Dipika he has given all the behavioral codes and ritualistic procedures for our sampradaya. Although he is most well known for these works, he was also a principal contributor to Jiva Goswami’s Sat-sandarbha. In each of the six sandarbhas, Sri Jiva offers his respect to Gopala Bhatta Goswami, noting that his own work on the sandarbhas is merely what he considered a rearranging of notes gathered by Gopala Bhatta Goswami.

Perhaps Gopala Bhatta Goswami is best known for having established the Radha-Ramana Deity and temple in Vrindavana. This event is connected to the story of his collecting Salagramas at Mahaprabhu’s request. After arriving in Vrindavana, he worshipped the Salagramas, keeping them around his neck or hanging them from a tree in a basket.

When Gopala Bhatta received the offering of ornaments and clothing from one wealthy patron, he placed it before his Salagramas and lamented on two accounts. First of all, he could not use the ornaments for the Salagramas, as they were suitable for a Deity. Secondly, he lamented because Mahaprabhu had promised that Gopala Bhatta would again get his darsana, but this had not come to pass. Mahaprabhu was in Puri, and although he sent Gopala Bhatta his kaupina and asana, he had not personally come to give him darsana.

Lamenting on two accounts, Gopala Bhatta became unconscious on the Buddha Jayanti after contemplating the significance of Prahlada Maharaja’s experience of Sri Narasimha. When he awoke, he noticed that the lid of the basket hanging from the tree was half open. He thought that perhaps a snake had gotten inside, so he tried to push the lid down, but it would not go down. When he opened it up, there was Radha-Ramana! The Damodara-salagram had manifested as an eleven and one half inch Deity of Krishna in a pose playing the flute.