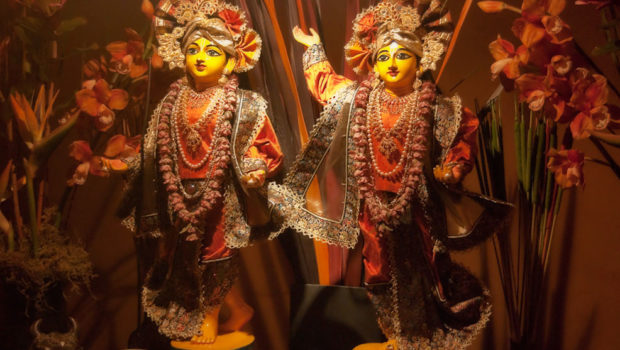 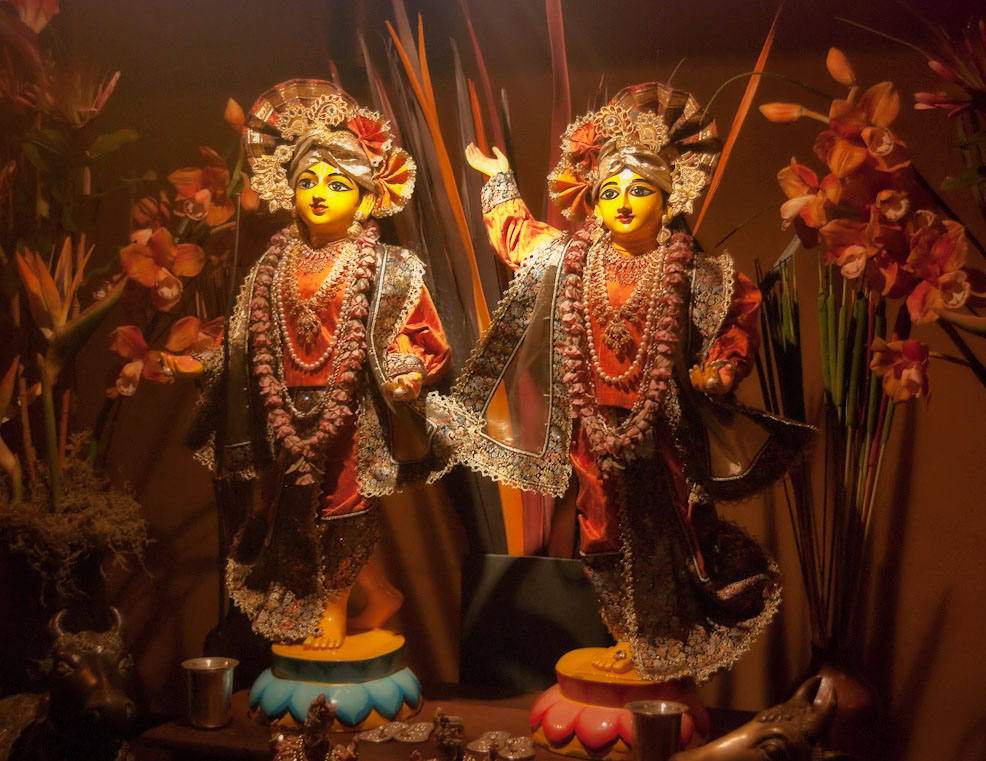 My favorite moments during my visits to Audarya were before my gurudeva gave class. While washing the arati paraphernalia, I would stand in front of the window and anticipate seeing him walk down the path from his house to the temple. On one such evening, a bit earlier than usual, Gurudeva walked down from his house as the sun was setting. Humble but with confidence, he seemed to bring the warmth of the sun of Gauda with him.

He would usually come and give class immediately, but that evening I instead heard him start a kirtana. It was so simple and sweet. But then it stopped. The kirtana stopped and I could only hear him talking. When I walked into the temple room to check it out, Gurudeva was sitting in a circle with the devotees in front of Gaura Nityananda. He was personally instructing each of them on how to play their instruments. He guided the devotees with kartalas to a specific beat for some time, then instructed the devotee playing mrdanga. My instrument repertoire is pretty limited, so I usually just try to sing. Gurudeva looked directly at me and said, “If it comes from the tongue, it goes through the ears. If it comes from the heart, it goes into the heart.” As he said “the heart” he pointed from his own heart to Gaura Nityananda’s hearts. Like a conductor who takes responsibility for his orchestra, he looked around the circle, checked everyone’s position, and after making sure everyone had been attended to, he said, “Okay, perfect,” which then initiated a new start to the kirtana for the deities.

In the early days of Western Gaudiya Vaisnavism, apparently a lot of devotees came to Krishna through the delicious prasadam feasts at the temple. Not to say it didn’t play a big part for me as well, but I was very attracted to japa. Chanting japa was really like medicine for me. I had so many years of inner conflict built up, and chanting was a daily dose of the bigger picture, a connection to absolute reality. Of course, Krishna gives us lots of mercy and taste in the beginning of our journey, however the past few months my practice had been more challenging. During my daily japa sessions, I wasn’t giving my heart as much and I felt kind of hopeless in my offering. Every night before going to my yurt, I would pray to Gaura Nitai to please let me develop a relationship with them and to show me how to please them. After Gurudeva had made his comment to me, it was as if we both knew exactly what was going on, and so did Gaura Nitai. They could hear it. Gurudeva’s instructions on kirtana thankfully created an extended teachable moment. Gaura Nitai and Gurudeva have shown me mercy by giving me the opportunity to cry about japa—to use my head to soften my heart.

Reading Yamuna Devi’s biography has also helped me immensely. Her story evolves from personally cooking with Srila Prabhupada and asking for a cigarette break in between her service, to becoming an illumined female renunciate guiding the next generation at Banabehari Mandir in Canada. When Kartamasa, a close young follower of Yamuna, wrote to her about the struggles that I and many others have in regards to the unsteady and sometimes uncomfortable nature of sadhana, she replied:

“Highs and lows are mercy. How else can we learn what we are meant to learn? How else can we lift ourselves up if we do not experience down? – If we are not feeling this, we are simply zombies trying to eke out various kinds of satisfaction from playing with the material energies- and how that covers our vision, our senses! Only in a sleeping condition are we unaware of the prison unconscious existence. Only time separates us from pure Krishna Consciousness.”

These highs and lows are a sign of advancement—we’re getting somewhere. I’m learning that as servants, we must pray as we go up the mountain on to the valley. Sincerity is most attractive in love. Call out to Krishna, call out to Gaura Nitai—they are an ocean of mercy.

“The Lord of Sri said: O son of Prtha, neither here in this world nor in the next is he vanquished. Anyone who is sincere, my dear friend, walks not the road of misfortune.” (Bhagavad-gita, 6.40)

At the end of a class at Krishna Road Temple, someone asked Gurudeva, “What does it mean to be sincere?” Taking a sip of water, Gurudeva said, “It means to be thoroughly honest.” He answered the question as if it was common knowledge which he kept within his heart. The next morning with my beads moving between my fingers, I contemplated how to get into a place where I was thoroughly honest with myself. I imagined Gurudeva in front of me, the true knower of our hearts, our ever well wisher. His presence showed a glimpse of what it means when he tells us, “Japa is a heart exercise.” Amidst the waves of the mind, I am trying to go against the current, praying to get to the sea. As sadhakas, we’ve been living on an unfamiliar shore since time immemorial, forgetting our nature as fish. Only with our heart will we meet with the waterfall of Lord Caitanya’s ecstasy – with the strength to swim upstream to seva in Krishna lila.

2 Responses to Into the Heart