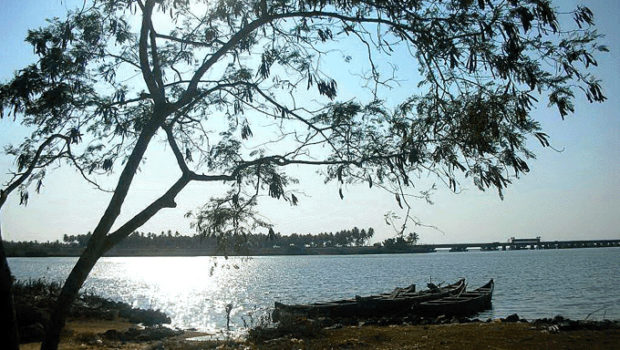 Navadvipa: The Best Place in All the Universes 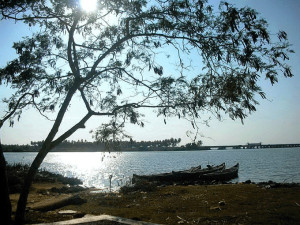 What is the meaning of Navadvipa? The nine islands denote the nine processes of bhakti.

“Hearing and chanting about the transcendental holy name, form, qualities, paraphernalia and pastimes of Lord Visnu, remembering them, serving the lotus feet of the Lord, offering the Lord respectful worship with sixteen types of paraphernalia, offering prayers to the Lord, becoming His servant, considering the Lord one’s best friend, and surrendering everything unto Him (in other words, serving Him with the body, mind and words).” Srimad Bhagavatam 7.5.23

This Navadvipa has been addressed as Svetadvipa in the Vedas, Upanisads, and so many other Vaisnava literatures.

“I worship that transcendental seat known as Svetadvipa, where as loving consorts the Laksmis in their unalloyed spiritual essence practice the amorous service of the Supreme Lord Krsna as their only lover; where every tree is a transcendental purpose tree; where the soil is the purpose gem, all water is nectar, every word is a song, every gait is a dance, the flute is the favorite attendant, the effulgence is full of transcendental bliss and the supreme spiritual entities are all enjoyable and tasty, where numberless milk cows always emit transcendental oceans of milk; where there is eternal existence of transcendental time, which is ever present without past or future and hence is not subject to the quality of passing away even for the space of half a moment. That realm is known as Goloka only to a very few self-realized souls in this world.” Brahma-samhita 5.56

Don’t think that Jagannatha Puri is superior to Navadvipa. Don’t think that Godavari-tata, where Mahaprabhu revealed his form and mood of Rasaraja-Mahabhava (Radha-Krishna combined), is superior to Navadvipa. Navadvipa is far superior to both these places. On one hand, Sri Caitanya Mahaprabhu revealed his transcendental form of Rasaraja-mahabhava at Godavari, and that most high class of hari-katha, Raya Ramananda Samvada, took place there. On one hand, Caitanya Mahaprabhu showed His extreme moods of separation in Gambhira. He jumped in the ocean near there, and he relished Srimati Radhika’s moods of separation, with Svarupa Damodara and Raya Ramananda. This may be said, therefore, to be the deepest and highest of the Lord’s abodes, but there are so many reasons why it is not.

Jagannatha Puri is a very elevated pastime place, especially regarding the Gambhira-lila of Sri Caitanya Mahaprabhu, but still it is like Dvaraka. There are no forests or sub-forests of Vrindavana there. Neither Gokula, Bandhiravana, Nandagaon, or Varasana is there. These forests are not in Godavari-tata, neither are they in Kuruksetra or Jagannatha Puri. Therefore, Navadvipa must be superior to these places.

Because so many places of Vrindavana are in Navadvipa in a hidden way, Navadvipa is known as Gupta-Vrndavana. One of the nine islands of Navadvipa is Godrumadvipa, and this island is described by Srila Bhaktivinoda Thakura in his Jaiva Dharma. Godrumadvipa is Nandagaon, nearby Varsana.

Crossing Ganga from there to Koladvipa, where our Sri Kesavaji Gaudiya Matha is situated, we find Giriraja-Govardhana. There, all the kunjas and caves in which Krishna played with the sakhas and sakhis are situated. Nearby there is Rasauli, or Rasa-sthali, where Candra-sarovara is located at the foot of Giriraja-Govardhana. Nearby there is Rtudvipa, where Radha-kunda and Syama-kunda are situated, and that is Kokilavana. Mayapura is on the East bank of Ganges, where the Ganges itself flows, and Lord Brahma performed thousands upon thousands of austerities on that Ganges bank.

In Navadvipa there is Pancaveni, the meeting place of the Ganges, Yamuna, Sarasvati, Godavari, Narmada, Sindhu, and Manasi Ganga. Radha-kunda and Syama-kunda are there, and this is all very wonderful. In Mamagachi (Modadrumadvipa) Bhandiravat is present, and Jahnudvipa is Bhadravana. All these truths have been explained by Srila Bhaktivinoda Thakura in his Sri Navadvipa Dhama Mahatmya; Vrindavana is in Navadvipa, not in Jagannatha Puri or Godavari.

In their Gaura-gayatri mantra, the brahmanas chant, “Gauraya.” Why do they utter, “Gauraya”? Who is Gaura? Gaura, or Gauranga, is Krishna, with the intrinsic mood and beauty or golden color of Radhika. He is actually Krishna, but now he is fully absorbed in the mood of Radhika. He feels as though he has become Radhika. But there are three Radhikas. One is Vrsabhanu-nandini Radhika, one is Viyogini Radhika, and one is Samyogini Radhika.

Three Features of Radhika and Mahaprabhu

Similarly, there are three Radhikas. Actually there is only one Radhika, but she has three moods or three features. Krishna will not change when he goes to Mathura, but he will not use his flute and peacock-feather. He will change his father and mother, but not his form. Only his mood will be changed, and mood is the prominent factor of determination. If he takes his flute and peacock-feather and tells everyone, “I am the son of Nanda and Yasoda,” then he is Vrajendra-nandana Krishna. On the other hand, if he has no peacock-feather and flute and he tells everyone, “I am the son of Vasudeva and Devaki,” then he is present by his prakasa (manifestation). His manifestation is not fully the Supreme Krishna himself.

In the same way, Vrsabhanu-nandini Radhika is always with Krishna in Vrindavana. In Nandagaon, where Radhika felt so much separation and spoke Brahmara-gita, she is Viyogini Radhika. Actually, she is never in viyoga, in the sense that she is never separated from Krishna. Srila Rupa Gosvami has explained this truth in his Lalita-Madhava and also in Ujjvala Nilamani, and that is why Kavi Karnapura has not discussed the lila of Mathura and Dvaraka. He completes his Ananda Vrndavana Campu just after rasa-lila. Our acaryas can never tolerate the idea that Radhika should be separated from Krishna.

In her original and complete feature she is called Vrsabhanunandini. She is always with Nanda-nandana Krishna, and the Radhika who feels separation in Nandagaon is her manifestation, Viyogini Radhika. She is the same Radhika, but she is feeling viyoga. Then, in Kuruksetra, she is Sanyogini Radhika. She goes there for a moment, for one or two days; and, keeping Krishna on the chariot of her mind, she brings him back to Vrindavana. Sanyoga means ‘always meeting.’

In the mantra ‘tan no gaura pracodayat‘, the name Visvambhara is uttered. Visvambhara never lived in the cave (Gambhira) in Jagannatha Puri, for he is Sacinandana Gaurahari in Navadvipa. From there he gives so much knowledge, so much love and affection, and a very high-class prema to the jivas. ‘Visvambharaya dhimahi‘ means that we meditate on him in Navadvipa.

In the cave of Gambhira, Mahaprabhu played a role of great opulence. At that time, in the night, no one but Raya Ramananda and Svarupa Damodara (Visakha and Lalita) were able to witness his pastimes. At that time, although Srila Rupa Gosvami was always hearing and knowing all Mahaprabhu’s pastimes, even he could not go there. In Godavari, Mahaprabhu manifested his form as Rasaraja-Mahabhava. This is opulence. At that time, even Ramananda Raya began to pray like Devaki or Arjuna, “O, You are that same Supreme Personality of Godhead.” This is opulence.

In Navadvipa, however, there is no opulence. In Navadvipa, Sacinandana Gaura-hari played as Krishna played with the girls in Vrindavana. While bathing in the Ganges he would say to the little girls, “Will you marry me? I want to marry you. If you will not marry me, you will not be happy. Give your offerings of sandesa and bananas to me.” This comes in the category of the asta-kaliya-lila of Caitanya Mahaprabhu, and it is therefore far superior to any lila in Jagannatha Puri. In Navadvipa there is svarasikhi-upasana (meditation and worship of the continual flow of unlimited lilas taking place throughout each twenty-four hour day), whereas in Puri there is mantramayi-upasana (meditation and worship of a specific lila, in this case Srimati Radhika’s separation feelings for Krishna).

Now we are going to Godrumadvipa , which is Nandagaon, where Premadasa Babaji performed his bhajana. What is Godruma? Go-druma. The druma means a very big Pipal (aswattha) tree, and ‘go‘ refers to the Surabhi cow. After Krishna’s pastimes, she brought Indra to this place and performed thousands upon thousands years of austerities in order to receive the darsana of Sri Caitanya Mahaprabhu. At last she received his darsana, when he was performing nagara-sankirtana in mahabhava. It was also in this place that Surabhi gave milk to Markandeya Rsi. So Navadvipa-dhama is not an ordinary or general place. It is the most superior place.

Srila Bhaktivinoda Thakura has an abode in Nandagaon, Ter Kadambha, which is so glorious because unlimited very sweet pastimes took place there. During the day Krishna used to play on his flute, calling, “Syamali, Davali, Gange, Yamune, Pisange,” and thousands and thousands of cows used to meet him. During the night his flute called, “Radhe, Lalite, Visakhe!” and they all came to him. Srila Bhaktivinoda Thakura preferred Godrumadvipa, just as Srila Rupa Gosvami preferred to have his bhajana-sthali in between Nandagaon and Yavat. Godruma is the same as Ter Kadambha in Nandagaon. Antardvipa is Mahaprabhu’s birth-place and also Krishna’s birth-place, Gokula and Mathura. But Srila Bhaktivinoda Thakura preferred Nandagaon, because Radha’s and Krishna’s separation and meeting are both present there.